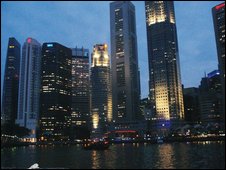 Singapore’s economy shrank by 19.7% in the first quarter of 2009 compared with the previous three months, its biggest quarterly contraction on record.

Official estimates also showed the economy had shrunk by 11.5% compared with the same period a year ago.

The government now expects the country’s GDP to contract by between 6% and 9% this year, much more than the previous estimate of between 2% and 5%.

Singapore has been hit by a fall in exports during the economic downturn.

The country’s Ministry of Trade and Industry (MTI) said the economy’s performance was much worse than expected.

“MTI’s earlier forecast had factored in the likelihood of a weak first quarter, but the advance estimates indicate that actual GDP growth will undershoot earlier expectations by a significant margin,” it said.

Manufacturing output fell by 29% in the first three months of the year, compared with the same period last year, pulled down by sharp falls in exports, which fell by an estimated 17% in March.

And the prospects for any quick recovery appear slim.

“With most of Singapore’s key trading partners still in recession, the manufacturing sector will remain weak for the rest of the year,” the ministry said.

Tai Hui at Standard Chartered said: “We still expect to see some signs of stabilisation at the end of 2009, although admittedly mild.”

Read also: Singapore devalues its fading dollar by The Telegraph.

And: Singapore suffers record contraction by The Financial Times.

The Straits Times: Not as bad as it looks.

For just US$7.50 a month, sign up as a subscriber on The Online Citizen Asia (and enjoy ads-free experience on our site) to support our mission to transform TOC into an alternative mainstream press.
Tags: economyrecession

Canadian tells S’poreans to “be grateful”