17-year-old Zoe who was mocked by some netizens for calling her gift, a Charles & Keith tote bag, a 'luxury' item. She has received an outpour of public support following reports of her rebuttal went out.

SINGAPORE — Zoe Gabriel, 17-year-old TikToker who was mocked online for calling Charles & Keith a “luxury” brand, impressed the C&K founders with her high EQ in handling haters’ comments so much that the company invited Zoe and her father to have lunch with its founders.

On Monday (9 January), Zoe posted a video on TikTok, shared her cheerfulness and thanked her father for gifting her “first luxury bag” from Charles & Keith, a Singapore-grown fashion brand.

But she was mocked by some netizens for calling her Charles & Keith handbag a ‘luxury’ item to the point where she had to turn off some negative comments on her video.

Zoe’s video has since garnered 6.5 Million views, with many pouring in supportive comments to Zoe, encouraging her to walk away from those naysayers, and expressing their admiration for Zoe in receiving her first fancy bag from her beloved father:

A TikToker from Sri Lanka commented that C&K is the ultimate luxury in her country, and she admired how Zoe treated that bag which made her feel special because she also owns one C&K handbag. “My family didn’t have a lot”

In another video, Zoe addressed the haters’ comments.

“Money is… a topic that makes me most uncomfortable to talk about, ” she said, “And that is because growing up, I did not have a lot. My family didn’t have a lot.”

“We couldn’t buy new things as simple as bread from Breadtalk…, ” she said in a tearful tone, adding that occasional trips to BreadTalk were already considered a luxury to them when they first move to Singapore.

“Everytime we passed by a store, my parents would just say next time. But next time we’d never come.”

She replied to @cressy, one of the TikToker who left a negative comment on her video, that her comment ” spoke volumes on how ignorant you seem because of your wealth.”

“To you, an S$80 bag may not be a luxury, but for me and my family, it is a lot, ” she expressed her gratitude to her father, who worked hard to buy her the bag.

“I can’t believe I got hate over a bag that I was so excited to have.”

Replying to @cressy i am so happy and grateful for you, that you can consider charles and keith not a luxury. also btw if you google it, lots of sources do classify them as a luxury brand. so.

Besides show solidarity with Zoe, some netizens had urged C&K to address the incident, suggested the company to sponsor “few more bags” to Zoe: 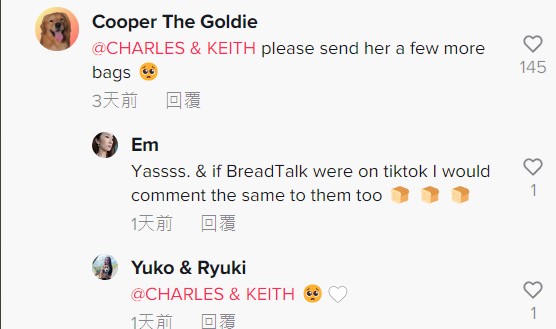 TikToker Mika even nudged C&K on its official TikTok page, urging the local brand to check with Zoe over recent C&K’s handbag saga.

C&K TikTok admin replied that their team “is aware of the content” and has already reached out to Zoe. 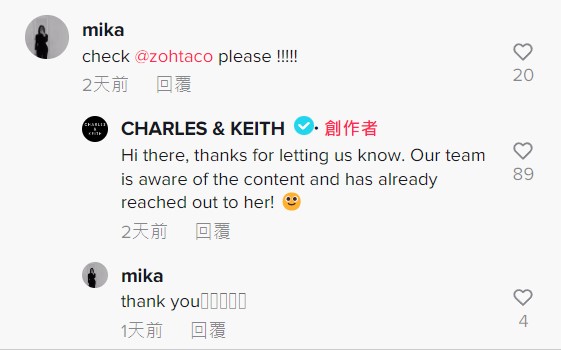 Charles & Keith responded, invited Zoe and her father to lunch with its founder

According to The Strait Times,  Charles & Keith told ST in an e-mail: “Our heart really went out to Zoe, but we were so impressed with (how gracefully) she handled the situation, displaying wisdom far beyond her years and values that resonated with us greatly.”

“Our founders believe that our products should spark joy, empower fashion lovers and give them confidence, something we believe she presented so eloquently in her video and for which we are so grateful.”

Although some netizens had called C&K to sponsor Zoe with a “few more bags”, C&K has yet to reveal whether they will do so or will collaborate with Zoe in future.

But C&K has invited Zoe and her father to have lunch with its founders who, “coming from humble beginnings, were so inspired by her humility”.

Zoe could likely be invited to take a tour in Charles & Keith headquarters also.

Takagi Ramen, a local ramen chain, also weighed in C&K’s handbag saga. After hearing Zoe’s story, they offered Zoe an S$80 voucher so she could treat her dad to a hearty meal.

In a Facebook post on Monday (9 January), Takagi Ramen said they were “angry and disturbed” to hear about Zoe being mocked by the rich elites just for enjoying and appreciating an $80 C&K handbag.

“It’s okay girl, don’t let these haters affect you. It’s not how much we have, but how much we enjoy that makes happiness, ” the post wrote.

“Be happy and proud for being an Average Singaporean, Takagi Ramen’s mission is to serve such resilient people like you!”

On the next day, Takagi Ramen shared another post of Zoe bringing her dad to visit their restaurant.

“Thank you Zoe for showing appreciation for your father’s handbag gift. The true value of a gift is the sentiment behind the gifting.”

“Goodness and resilience definitely spread within this family, it was such a pleasure serving them!”