While Transport Minister S Iswaran has clarified on Friday (3 Sep) that there has been “no evidence” that COVID-19 clusters in bus interchanges have resulted in spreading the virus to commuters, netizens are still not convinced by this, given the increase in unlinked COVID-19 cases recently.

Speaking to the media on the sidelines of Land Transport Industry Day, Mr Iswaran said: “The experts have said that there is no evidence of any spread to commuters but we will make sure we observe all the safeguards that have been put in place.”

“If there is a need to do more, the LTA [Land Transport Authority] will work with public transport operators to do so,” he added.

The Minister went on to say that the priority right now is to ensure that both transport workers and commuters are safe, adding that the public transport system continues to function.

As of last Wednesday (1 Sep), Singapore has reported about 314 cases – including 284 bus drivers and service staff at bus interchanges. The remaining are their household contacts and members of the public. The figure increased to 469 cases on Sunday (5 Sep).

When asked on how the drivers could have been infected in the first place, Mr Iswaran noted that the matter is still being studied by medical experts.

“It’s plausible that they may have contracted (the virus) from the community, but at the same time, it is also the case that there could have been some spread at the workplace because of the fact that they come together for certain types of activities,” he said.

Mr Iswaran added that currently there isn’t any major impact on bus services.

“This is something… we are tracing very closely, because we need to make sure that the bus captains are well enough to do their job and do it safely,” he remarked.

LTA has also enhanced its measures at bus interchanges, which include segregating staff resting areas from dining areas, single seating at dining areas, as well as setting up physical separators at designated smoking areas.

The frequency of cleaning of “high touch points” at staff areas will also be doubled to at least once every hour, the authority stated in a press release on Thursday.

In order to detect infection cases at a much faster pace, bus drivers and staff handling service counters in bus interchanges will also have to undergo routine testing at least once a week from Thursday.

However, a look through the comments section of CNA’s Facebook post on the matter reveals that many netizens are still not convinced by the Minister Iswaran’s claims, as they pointed out that there has been a continued increase in unlinked cases of COVID-19 lately.

The Ministry of Health (MOH) on Sunday confirmed and verified that there were 186 cases of locally transmitted COVID-19 infection, of which 90 were unlinked cases.

One netizen wrote: “So many unlinked cases. What makes the experts think that none of these unlinked cases could have gotten covid from taking buses?”

“So many unlink cases shooting up and it is still not link to bus interchange clusters? Can MOH confirm those unlink cases all have not taken bus? If yes, which time and date and who is the bus captain and is the captain covid free?” said another commenter. 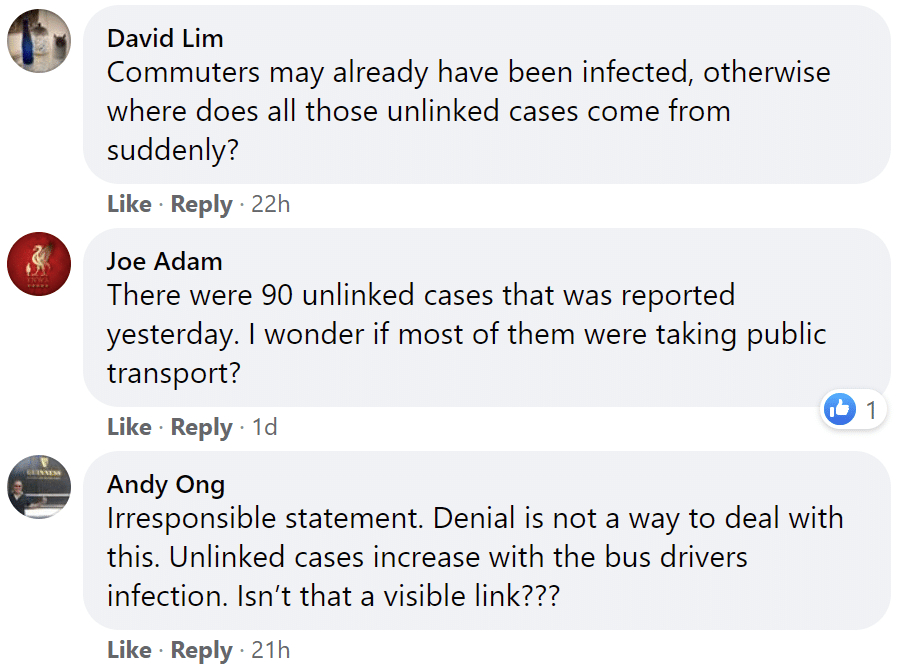 Several others questioned how the authorities even gathered “the evidence” in the first place, given that there is no requirement to use TraceTogether in public transport.

“How do you gather the evidence? How do you explain the rise in so many unlinked cases since interchanges and bus captains were affected? There is no TT when you board any buses. It was seems put forward that the virus does not or know not to infect bus/trains commuters,” said one netizen.

Another commenter wrote: “Wonder on what rational basis he proclaimed that there is no evidence of spillover to the community when the daily traffic of passengers are incessant and besides no safe entry and exit tracers for public transport; how the MTF or the new MOT explains the growing unlink cases.”

For just US$7.50 a month, sign up as a subscriber on The Online Citizen Asia (and enjoy ads-free experience on our site) to support our mission to transform TOC into an alternative mainstream press.
Tags: S Iswaran