On Mon (19 Jul), the Tripartite Alliance for Fair and Progressive Employment Practices (TAFEP) made a post on its Facebook page, advising people to ensure that their job advertisements adhere to TAFEP guidelines so as to “avoid being discriminatory”, regardless of the recruitment platform used.

The post even included further write-ups to help employers write a “fair job advertisement”. TAFEP was set up in 2006 by the Ministry of Manpower, NTUC and Singapore National Employers Federation to promote the adoption of fair, responsible and progressive employment practices in Singapore.

Not long after TAFEP made the post, a netizen made a follow-up post on Wed (21 Jul) showing TAFEP that a discriminatory advertisement has been made on Facebook.

The netizen asked TAFEP if the advertisement is considered acceptable. “The wording seems to indicate that they are ONLY recruiting people from India for these jobs and no one else,” the netizen noted.

TAFEP replied on Thursday (22 Jul) saying, “We will look into this recruitment ad. Thanks.” 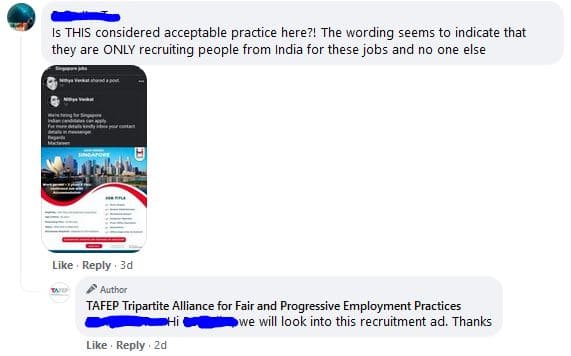 Further online checks reveal that the job advertisement actually came from the Facebook page of Maclareen Consulting, an education consulting firm based in the city of Thane which lies in the Mumbai Metropolitan Region of India. It’s not known if Maclareen Consulting has a local representative but if the job advertisement was uploaded outside of Singapore, TAFEP may not necessary have the power to stop the advertisement.

In any case, it appears that Maclareen Consulting is only an agent. It’s not known if any of the companies in Singapore have asked them directly to help recruit foreign S Pass job applicants. If it was indeed the case, then these companies would unlikely be willing to recruit any local job applicants since they have already bent on recruiting S Pass foreigners.

Then, any job advertisements put up by these companies on the Singapore’s National Jobs Bank to recruit Singaporeans will be futile.

Currently, companies need to put up jobs ads on the Jobs Bank to give the locals a chance to apply before they are allowed to hire foreigners.

Last Oct, the media published an article highlighting an unfair hiring case involving a finance and insurance company. The company was caught pre-selecting a foreign candidate for a managerial role at its Singapore office, after a whisleblower, the firm’s human resources manager subsequently filed a complaint with TAFEP against the company.

Furthermore, it was found that the work experience and educational qualifications of the pre-selected foreigner, a British national based at the company’s London office, also did not meet the advertised requirements.

The advertisement received more than 60 applications, with 28 fulfilling the advertised requirements, but none of the applicants were invited for interviews.

The case was subsequently referred to MOM but MOM decided to suspend the work pass privileges of the offending firm for only 6 months.

If it wasn’t for the whisleblower, the said firm mentioned earlier would have successfully recruited the British national from its London office to Singapore.