Beyond compassion and being friendly to businesses, the Singapore government has to also guard against the inherent vices in its policies, said the National University of Singapore Vice Provost of Student Life Associate Professor Leong Ching on Monday (19 July).

In a post on LinkedIn, Assoc. Prof Leong described “inherent vices” as the “property of quality of any substance or object which causes itself to self-destruct”.

She explained, “Such vices are defined in relation to the risk they face – in art pieces, it could be a function of time or the unstable structure of the art piece itself such as the paint or materials used, whereas in maritime law it may be about the perishable nature of cargo – or simply that ships may sink.”

The associate professor then elaborated that these vices are excluded by insurers from compensations as the risks as inherent in the objects themselves, meaning that the contractors and carriers bear the burden of those risks.

Relating this to policy, Assoc. Prof Leong said that she has argued that policies do possess such inherent vices as well, “especially those designed in such a way as to attracting certain forms of risks – risks linked to uncertainty, maliciousness and non-compliance.”

She stressed, “In such instances, it is the duty of the policymaker to build in responses to such risks, which can be reasonably for seen.”

Referring to the recent spike in cases linked to KTV lounges, Assoc. Prof Leong cited the two “defences” that have been attempted in addressing the situation.

The first defence is that KTVs being allowed to pivot to F&B operations was the Government trying to help businesses. The other argument is that the “boyfriend” route to entry into the country was a sign of compassion.

The “boyfriend” route refers to how one of the Vietnamese KTV hostesses was allowed entry into Singapore under the familial ties lane and was sponsored by her boyfriend.

Assoc Prof Leong went on to cite the argument’s conclusion that “The government tries to help” but that people abuse the system and that “this is not a loophole”. The conclusion goes on to ask people to stop blaming the government or foreigners but instead to blame those who abuse the privileges and aid available to them and those “who cause problems for all of us”.

The associate professor countered that this is “NOT the moral of the story”.

She explained that while we are entitled to hold accountable those who break the law, “we should also look at the loose policy design, which ignored, or at least, did not recognise fully, the inherent vices of both the KTV ‘pivot’ and the ‘boyfriend’ policy”.

“No one blames the government for trying to help,” she said.

“But it cannot assume that compassion and being friendly to businesses are enough. It must also guard against the inherent risks present in the world.”

Assoc. Prof Leong then linked to an article by Canadian researcher Michael Howlett on his original conception of inherent vice and policy design.

Assoc. Prof Leong’s post was shared on the platform by Senior Lecturer and Professor of Practice at the Hong Kong University of Science and Technology Professor Donald Low.

In a Facebook post of his own on Wednesday (21 July), Prof Low made similar arguments, reiterating the point.

In his post, Prof Low referenced Mr Howlett’s paper titled “Dealing with the Dark Side of Policy-Making: Managing Behavioural Risk and Volatility in Policy Designs” published in the Journal of Comparative Policy Analysis in 2020.

“This is a very good paper that sheds light on why the arguments of ‘enforcement is always a cat-and-mouse game’, ‘the authorities are already very stretched’, and ‘individual responsibility is more effective than strict enforcement’ aren’t quite acceptable,” said Prof Low. 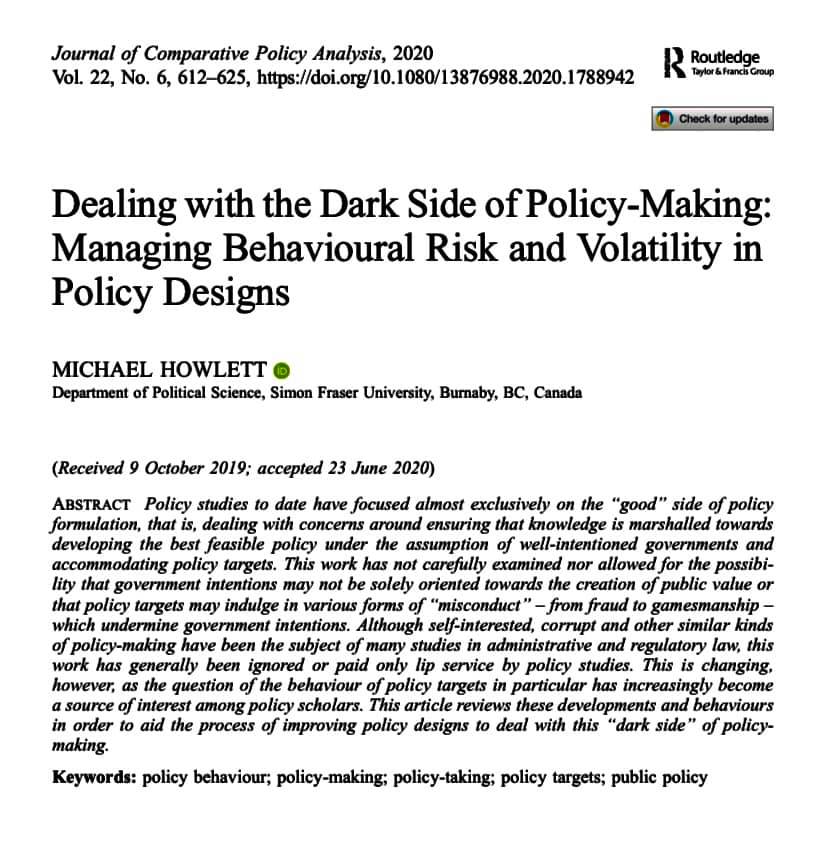 The main argument, said Prof Low, is that good policy design should take into account the possibility that recipients of the policy would “engage in misconduct” such as fraud or “gaming the system”, thus thwarting the government’s intentions.

Noting arguments from people who say that the authorities are not to be blamed for allowing KTVs to pivot to F&B operations as they had good intentions and that it would be impossible for rules to be fully or completely enforced, Prof Low dismissed these as “unpersuasive”.

“I remember one of my first Permanent Secretaries telling me that good policy intentions are not an excuse for bad implementation or unintended outcomes,” he recalled.

Prof Low went on to add that an inadequately enforced rule is a “bad” one. He conceded that no one expects perfect enforcement, however, the violations in the case of the KTV cluster appeared to be “blatant, egregious and widespread”.

“In this case, questions must be asked of those tasked with enforcing the rules, not just of those who violated the rules,” the professor concluded.