The Vietnamese woman who was the first reported case in the KTV COVID19 clustered is a short-term visit pass holder who entered Singapore in February via the familial ties lane, said the Ministry of Manpower (MOM) and Immigration and Checkpoints Authority (ICA) on Friday (16 July).

In a joint statement, ICA and MOM noted that the woman was sponsored by her Singaporean citizen boyfriend, clarifying that the familial ties lane facilitates entry of foreign with “intimate ties” in Singapore.

According to ICA’s Safe Travel website, travellers that are eligible to travel into Singapore under that lane include immediate family members, relatives, or the fiancée or fiancé of a Singaporean or permanent resident.

These travellers can be holders of valid work pass, student pass or hold an in-principle approval (IPA) of a student pass. Even former students returning to fulfil scholarship applications are eligible to enter via this lane.

Others include permanent resident IPA holders, ICA-issue long term visit pass IPA holder or an adopted child of a Singaporean or PR who holds an IPA dependent pass.

“During this pandemic, ICA has been assessing applications to extend short-term visit passes on a case-by-case basis taking into consideration extenuating reasons, such as international travel restrictions and flight availability, and whether the applicants have family ties in Singapore,” said the authorities.

“For example, Vietnamese nationals can only return to Vietnam through relief flights arranged by the Vietnamese authorities.”

Two more entered in late 2020 via air travel passes that enable foreigners travelling for business of official visits to enter Singapore. This lane was open to travellers from Vietnam between 8 October 2020 to 13 February 2021.

The remaining four short-term visit pass holders, including the Vietnamese woman, entered Singapore this year via the familial ties lane.

Short-term visitors are prohibited from engaging in any form of employment, paid or otherwise, in Singapore and those found to breach this law are liable to be prosecuted or have their passes cancelled before being deported. They could also be barred from re-entering Singapore, said ICA and MOM.

In the case possible illegal activities within the KTV clusters, the police noted that investigations are ongoing.

In a statement, the authorities noted: ““If the investigations show any criminal offence on the part of these foreigners, ICA and MOM will take firm action against them, including cancelling their work pass, student’s pass or visit pass, and deport them.”

“The police and relevant authorities will also be stepping up enforcement against breaches of safe management measures, as well as vice and other illegal activities, in the other pivoted KTV outlets,” it added.

Netizens in the comments section of the Channel NewsAsia Facebook page, however, were baffled by the fact that the Vietnamese woman was allowed entry into Singapore under the familial ties lane. They expressed their confusion that the “boyfriend” was considered as familial ties. 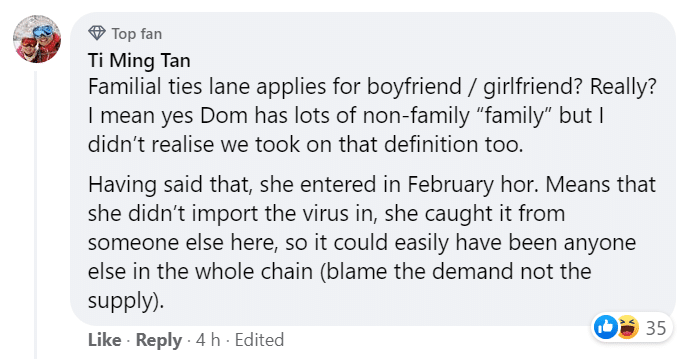 One person asserted that this “loophole” is one that many use to bring in people for “vice activities” and that the ICA is “still sleeping” if not for the pandemic.

Another person said that it is time for the ICA to “wake up”.

One person called on the ICA to define “intimate ties”, asking how the authority would verify such a tie such as being a boyfriend or girlfriend.

Another person shared their difficulty in securing permission for their daughter and son-in-law to enter Singapore via the familial ties lane. The IPA was approved but later withdrawn “at the last minute”.

The netizen expressed her anger that the ICA would allow “unrelated foreigners” to enter but not family.

Several netizens suggested that the ICA and relevant authorities ought to be held responsible for the KTV clusters since they were the ones to approve entry of the Vietnamese woman in the first place. 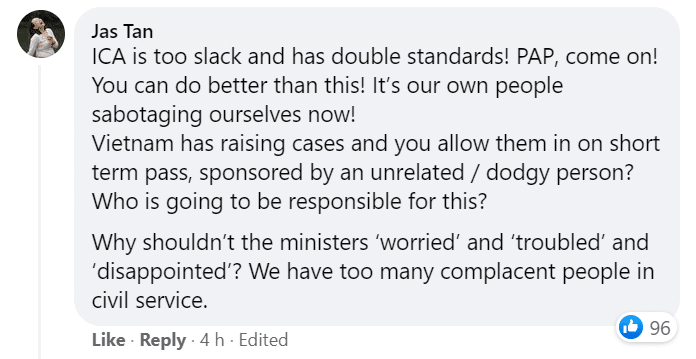 One netizen demanded that the Government conduct an investigation into the ICA on the matter.

One netizen also stated that ICA appears to be Singapore’s “weak link”, citing the entry of the first variant from a South Asian country and now a new cluster by a foreigner.

Another person questioned why the entry permit as well as the “pivoted KTV permit” were granted in the first place.