by The Online Citizen
in Editorial
Reading Time: 5 mins read
3

Singapore’s population growth is equivocal, with the country’s population growing from 5.08 million in 2010 to 5.69 million last year, but the data discounted the number of Singaporeans living abroad for the continuous period of 12 months or longer since 2003.

It was reported earlier that Singapore’s total population recorded its lowest growth since independence over the past decade, as it grew by only 1.1 per cent each year.

This was among the many findings stated in the first statistical release by the Department of Statistics (DOS) on the country’s census of the population in 2020.

The census, Singapore’s largest national statistical exercise, is carried out once a decade to gather demographics, social and economic data, among others.

“It tells us where we were, where we’re at now, and identifies some of the things that we need to address going forwards,” said Indranee Rajah, Minister in the Prime Minister’s Office, who oversees the National Population and Talent Division.

Although some of the data collected will be affected as the survey was conducted during the COVID-19 pandemic, the census captures “broad trends over the decade… notwithstanding the blips over the last one and a half years”, she added.

Of these figures, Singapore’s citizen population increased from 3.23 million to 3.52 million in the last decade, whereas the Permanent Resident (PR) population remained “stable” at around 0.5 million.

As for the number of non-residents, it increased from 1.31 million to 1.64 million.

However, the census did not provide any data on the number of Singaporeans living abroad for the continuous period of 12 months or longer.

When searching for the data on DOS’ website, it stated that “data from 2003 onwards exclude citizens who are overseas for a continuous period of 12 months or longer as at the reference period”. 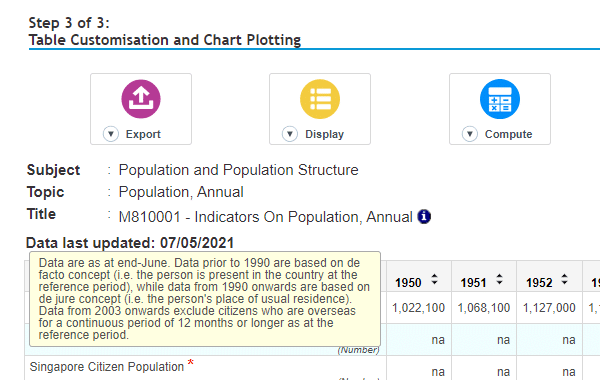 This means that DOS has stopped giving the number of Singaporeans residing overseas since 2003, even though such data comprise a sizeable proportion of the country’s population.

It also stated that there were about 153,500 overseas Singaporeans as of June 2008—an increase from the 147,500 in the previous year—and most of them residing in Australia, the United Kingdom (UK), the United States (US), and China.

Now, based on the statistics provided by Singapore to the United Nations (UN) Population Division Department of Economic and Social Affairs, the number of Singaporeans living abroad has increased from 156,468 in 1990 to 340,751 in 2019.

In the Strategy Group’s press release, then-National Population Secretariat’s (NPS) director Roy Quek said that more Singaporeans were moving abroad to pursue study and work, and that it was “not a problem per se” as long as they stay engaged and connected with Singapore.

“The fact that many Overseas Singaporeans have done well in other countries attests to the success of the Singaporean system in producing top students, professionals and entrepreneurs who can succeed outside of Singapore.

“We should celebrate their successes and help them stay connected to home, so that they remain Singaporeans in their hearts and minds even when they are physically away from the rest of us,” said Mr Quek.

Moreover, some Singaporean students abroad were sponsored by Government scholarships with an obligation to return to Singapore upon finishing their studies, as highlighted in the Migration Policy Institute’s (MPI) article on 3 April 2012.

It noted that most of these Singaporeans migrated as highly skilled workers and were employed in specialized sectors—banking, information technology, medicine, engineering, and science and technology—while some were students pursuing their first and postgraduate degrees.

However, the authors claimed that the trend for Singaporeans to emigrate permanently without necessarily contributing or returning to their homeland in the last decade has led Government officials to worry.

“With an average of about 1,200 highly educated Singaporeans (including 300 naturalized citizens) giving up their citizenship each year in favor of others, it is feared that, due to a lack of dual citizenship provisions, the country could be facing a brain-drain crisis rather than reaping the benefits of circular migration.

“In fact, it was reported in 2010 that about 1,000 Singaporeans a month were applying for a ‘Certificate of No Criminal Conviction’ — a prerequisite to getting permanent residence overseas,” they asserted.

What’s more, the authors claimed that more than half of Singaporean youth surveyed in some social surveys expressed their interest to leave the country to build their careers if they were given an opportunity to do so.

To tackle this, the Singapore Government has implemented measures to reconnect with overseas Singaporeans.

These measures include linking up overseas Singaporeans with prospective employees in Singapore, providing updates on the latest national developments, as well as setting up recreational clubs and social events for them in foreign cities.

“These tactics aim to keep overseas Singaporeans tied to Singapore, whether practically or emotionally,” the authors added.