While the number of Employment Passes (EPs) given out to foreigners in finance and infocomm sectors from 2005 to 2020 stands at 40 percent, but the amount of job created for local professionals, managers and executives (PMEs) in these two sectors are even higher, said Minister for Manpower Tan See Leng in Parliament on Tuesday (6 July).

Dr Tan, who is also Second Minister for Trade and Industry, gave out these figures while delivering his ministerial statement in Parliament on foreign workforce policies.

“If the competition is not here, it will be outside. The competition will be helping other companies in other countries to beat ours here, and displace our workers,” he said.

As a reply to Ms Poa, Associate Professor Jamus Lim (Sengkang GRC) and Mr Saktiandi Supaat (Bishan-Toa Payoh GRC) on the breakdown of workforce numbers, Dr Tan revealed that out of about 177,000 EPs as of 2020, about 10 percent could be found in manufacturing and construction industries. The remaining are in services sector.

As to whether the growth in local PME job include Singaporeans, the Minister highlighted about the low citizen unemployment rate of around 3 percent over the last decade, and said that 87 percent of citizens were born in Singapore.

“The simple point is that while we have a good Singaporean talent pool, our pool is not large enough to fulfil all of the needs, the breath and the depth of these enterprises,” he said.

He added, “The misconception is that if we say ‘no’ to the foreigners coming in… these jobs they would have taken would therefore all go to Singaporeans… Today, even as we speak, we still have about 22,000 PME jobs that are not filled. Companies are desperate to fill these jobs. They would love to take in Singaporeans if they could, because they would be more productive.”

Based on this, Dr Tan then asked Mr Leong to “think deeply”, “deliberate and offer some advice”.

He added that to make sure local employees can compete fairly, work pass controls are in place so foreigners do “not come to Singapore just because they are cheaper to hire than locals”.

He also mentioned about the progressive tightening and raising of quotas and levies at the work permit and S Pass levels, even though businesses had pushed for the rules to be relaxed over the past decade.

Dr Tan expressed that quotas and levies are not implemented on EPs because there is already strong competition for global talent and worldwide scarcity in areas like technology and digital skills.

“A quota would be hard cap that would limit our ability to compete at the high end of the global economy, while for a levy to have any effect at all on EP numbers, it would have to be set very high and would substantially increase business costs.”

Responding to earlier points made by Mr Leong on employers of foreign EP holders not required to make Central Provident Fund (CPF) contribution, Dr Tan said it is not right for the Government to make them responsible for their retirement fund and home ownership needs since they will not be permanently staying in Singapore.

“As foreign PMEs… are not working in Singapore on a permanent basis, I don’t think we should be responsible for their retirement adequacy or home ownership needs. Hence I don’t think it makes sense for us to extend our CPF benefits and coverage to them,” said Dr Tan.

“Instead, when reviewing qualifying salary to maintain a level playing field, we take into account CPF contributions as part of the cost to employers.”

Over on social media, netizens questioned the accuracy of data provided by Dr Tan that showed that job creation for local PMEs in infocomm and finance sectors are stronger compared to the number of EPs issued for foreigners in these sectors. Penning their thoughts in the Facebook page of The Straits Times, online users asked for the proper data to be released, with full breakdown of how many permanent resident (PR), EP and citizens are included in the figure mentioned by Dr Tan.

Others asked how many of these local PMEs who managed to secure employment (as mentioned by that Dr Tan) include PR, or are EPs who have converted to Singapore citizen. 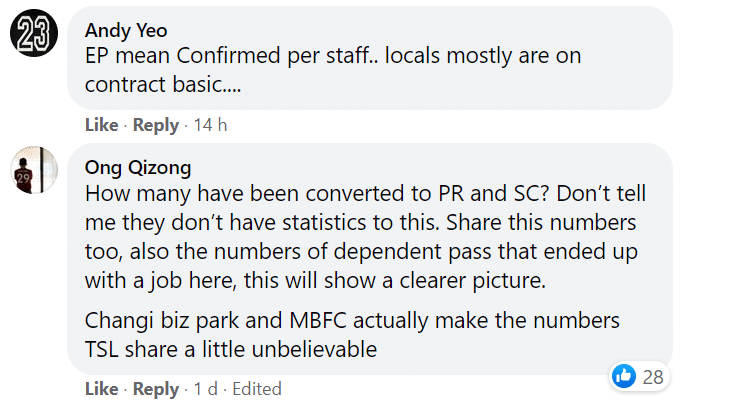 Others pointed out that as long as EPs are getting paid low, they will always be more favourable for employers. As such, this will again cost local Singaporeans their job as they will not be able to accept such low wage due to the high cost of living here.

A couple of netizens questioned the quality of jobs created for citizens here. They wondered if senior roles were given to local PMEs or the EPs, adding that more data should be given on the number of Singaporeans working in blue-collar jobs like food deliverers, security guards, private hire vehicle drivers, and more.