Two-thirds of people being vaccinated against COVID-19 would not be enough to achieve sufficient herd immunity to completely eradicate the virus, especially with the Delta variant which is more transmissible, said Health Minister Ong Ye Kung on Thursday (1 July).

“Having said that, that doesn’t mean the battle will be lost because you can still have an endemic COVID,” he added in an interview with The Straits Times.

A clip of the interview was posted on The Straits Times YouTube channel. It has garnered more dislikes than likes, however, at 147 and 114 respectively.

In the interview, Mr Ong explained COVID-19 could be more like influenza where people would still be infected with the virus but it would not be severe.

“You don’t make COVID-19 like measles, for example, where you try to eradicate it,” he said.

The other aspect he talked about is how two-thirds herd immunity is “not enough” to protect seniors who are more susceptible to a severe form of the disease, said the minister.

“While two-thirds full vaccination is important from the population point of view, for the seniors who are much more susceptible to a serious form of the disease, it needs to be much higher,” said Mr Ong.

When asked how much higher it should be, the minister said: “We wish we can reach the level of UK or some parts of UK where over 90 per cent are fully vaccinated. And if you can go to 90 per cent, 100 per cent; the more, the better.”

Comments on YouTube seem mostly sceptical of the change in messaging from the government, from total eradication of the virus to living with it as an “endemic”.

One person suggested that the government is getting “desperate” to open borders for the sake of the economy, thus the change of messaging. 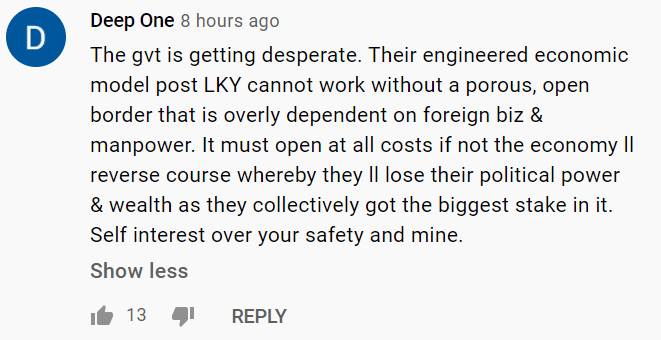 Similarly, a couple of people lamented that the government is trying to open up the country more for the sake of making money.

A couple of people highlighted the lack of laws to compel people to take the vaccine.

In the same vein, one person noted that the government has the power to enact laws to make people get the vaccines.

One person commented that the government appears to have given up on its people.

While another wanted to know what living with COVID means and what it would look like in terms of regulations and restrictions.

For just US$7.50 a month, sign up as a subscriber on The Online Citizen Asia (and enjoy ads-free experience on our site) to support our mission to transform TOC into an alternative mainstream press.
Tags: COVID-19Ong Ye Kung