Following a report by The Parrot Review (TPR) in March about a National University of Singapore (NUS) resident assistant (RA) who was expelled for having allegedly filmed sex acts between him and two undergraduate students without their consent, the website has just reported that the university is now investigating one of the alleged victims over the “release of sensitive documents”.

In an article on 30 June, TPR founder and Editor-in-Chief Wali Khan wrote that the NUS has opened an internal investigation into how information about the RA’s alleged assault case made its way to the site.

The report goes on to explain the timeline of events of the alleged case starting with a meeting between the RA and an NUS investigation officer on 14 May 2021.

The officer is a former Senior Staff Sergeant from the Singapore Police Force. She had interrogated the RA.

TPR claimed that she had contacted Mr Khan a month after the meeting to inquire about his sources, noting that her “line of inquiry operated on the assumption that the alleged victim had been The Parrot’s primary source.”

“As requested by [NUS] management, I need to find out how much [alleged victim’s name] revealed to you; what documents did she reveal to you?” the officer was quoted as saying to Mr Khan over a phone call on 14 June.

The officer confirmed that the nature of the investigation pertained to “sensitive documents being release”.

TPR goes on to say that the officer had also “implied in a subsequent phone call on June 19 2021 that NUS’s internal investigation into the alleged data breach began shortly after the school received a complaint from the expelled RA, claiming that the school’s management compelled her to “verify” the issue of information being disseminated to us.”

Mr Khan wrote in his report that she also confirmed, after being probed further, that the initial charges against the alleged victim were classified under “doxxing and harassment”.

When asked about the confidentiality of the documents, the officer also told Mr Khan that the NUS Board of Discipline’s verdict on the RA’s case and his expulsion was considered confidential.

She also apparently confirmed that “the investigation was “complete” but did not comment extensively on her findings.”

TOC has reached out to NUS for comments with regard to TPR’s article.

TPR questions NUS on checkered past of its Investigations Officer

Beyond that, TPR’s article went on to cover details about the officer’s history, such as her being jailed for five months in 2019 for forging an alleged sexual assault victim’s testimony when she was still with the Singapore Police Force.

According to TPR, the officer’s account of that case “implied that the alleged victim did not mind being molested and recommended that no further action be taken.”

“The following month, the investigation papers were sent to the Attorney-General’s Chambers, recommending that the alleged victim be given a warning for providing false information,” the report noted.

The article also highlighted the officers link to another controversial case back in 2016. She was said to be one of the last three officers to interrogate 14-year-old Benjamin Lim. The boy was accused of molesting an 11-year-old girl.

Many would remember the tragic development in this case when the young boy, just 90 minutes after being released from Ang Mo Kio Police Division, was found dead at the foot of his HDB block in Yishun. His death was ruled a suicide.

Back to TPR’s report on the NUS investigation officer, the site stated that the university had “declined to acknowledge” the internal investigation about “the release of sensitive documents”. The University also did not respond to TPR’s queries about whether the institution was aware of the officer’s prior conviction during the hiring process.

TPR reproduced NUS’s response which was:

“The NUS Office of Campus Security holds its staff to high standards of professionalism, integrity and conduct. We are aware of concerns regarding the background of a staff member in our investigation team. We are currently looking into the matter. In the meantime, we have reassigned the staff’s duties.”

TPR also noted that the University declined to respond to its queries on whether there was a “concerted effort” to shroud the officer’s identity and checkered past due to her name not being listed in full in the NUS Office of Campus Security Investigation Division roster.

Following the publication of this article on TPR’s website, Mr Khan had shared the article on his Twitter page with the added clarification that he wasn’t implying that the officer or any other police officers were responsible for young Mr Lim’s untimely death.

He added in the Twitter thread—which has since been removed—that “this is what institutional victim blaming looks like. It looks somewhat innocuous on the surface; but make no mistake, an investigation into the “release of sensitive documents” is synonymous with silencing victims”.

He concluded, “It’d be easy to pass this off as an “NUS issue”. It’s not. This is about how one of the biggest schools in a first world nation treats its most vulnerable students.” 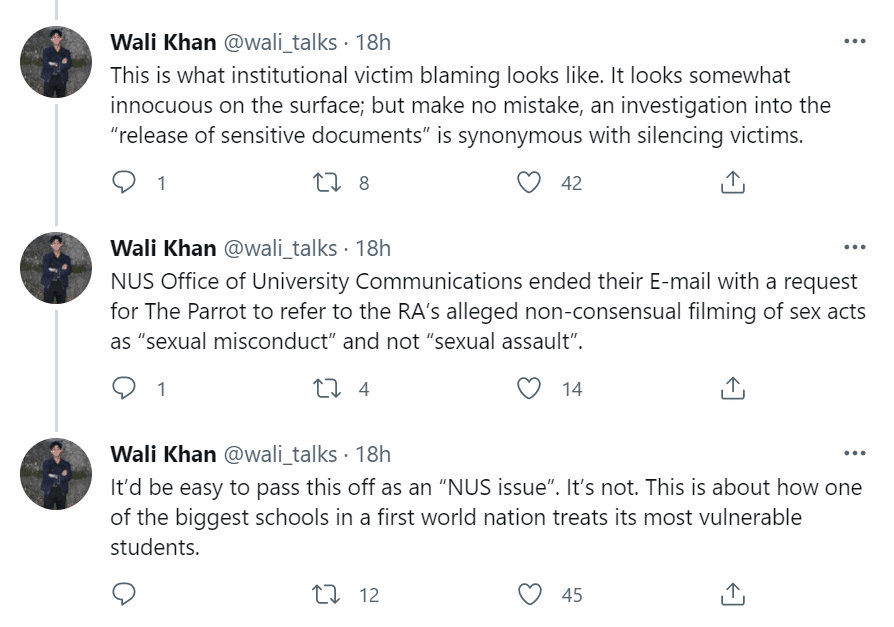