About 18 years after the police raided a shop selling pirated CDs, a man who was part of the group that managed to give the authorities the slip was finally fined for his crime.

In 2003, the man evaded the police with his brother during the raid. Though he remained in Singapore, the police thought he had fled the country and couldn’t find him at his local address.

He only popped back on their radar 15 years later in 2018 when he went to the Immigration and Checkpoints Authority (ICA) to inquire about a passport application.

The man, Tan Hong Ying, was eventually fined in court on Tuesday (29 Jun) the amount of S$3,500 for one count of being party to a criminal conspiracy to sell pirated CDs.

He was initially faced with more than 50 charges under the Copyright Acts but these were withdrawn. The judge had considered that Hong Yin’s role in the operation was minor and that he stayed out of trouble since 2003.

Hong Yin, now 47, was part of a group of culprits dealing in the sale of pirated music and software CDs in Singapore, working for his older brother and leader of the group, Tan Hong Jin, for two weeks in early 2003.

Though he wasn’t paid a salary, his debt to his brother was waived in return for his work.

A second brother, 14-year-old Tan Hong Chyan, also worked for the group, earning S$60 a day ensuring that all sales were accounted for.

Another person accused is Heng Kian Huat, 38, who was designated as the “fall guy”. He was paid S$100 a day to act as the frontman of the store and be the one to get arrested during raids. He was compensated S$2,000 per raid.

The other two that make up the five-member group are 29-year-old Poh Wee King, the “computer boy”, and 57-year-old Quirk Song Kek, the delivery man.

According to court documents, Hong Yin was asked by his brother to take over for him at the shop during the day of the raid on 25 February 2003.

During the raid, which was part of a simultaneous islandwide raid of the syndicate, Hong Chyuan was found and arrested with two others at their store in Ang Mo Kio.

After the raid, the ringleader, Hong Jin, contacted his younger brother, Hong Yin, and asked him to go to Malaysia. According to court documents, Hong Ying explained that the police had raided all the shops and that they needed to “cool down” in Malaysia.

However, at the Woodlands Checkpoint, Hong Yin had went out for a smoke while his brother stayed in the car. Suspecting that they were about to be arrested, Hong Yin decided not to go with his brother to Malaysia.

He walked out of the checkpoint, bought a drink, and went home.

According to the prosecution, the authorities had believed that Hong Ying left Singapore that day in 2003 as he was cleared to leave the country with his brother.

Even so, they visited his registered address in Singapore but could not locate him.

Hong Yin, it appears, lived in Singapore in various addresses between 2003 to 2018. He was only arrested after applying for a new passport at ICA in September 2018.

Netizens on Channel NewsAsia‘s Facebook page are tickled by the fact that the case involves pirated CDs – which are more or less obsolete now – as they took a trip down memory lane recalling the days of video and music CDs.

Several others, however, wondered how the man managed to give the authorities the slip for 15 years while residing in Singapore.

They questioned whether he had CPF contributions into his account all these years, or even if he had used an ATM. 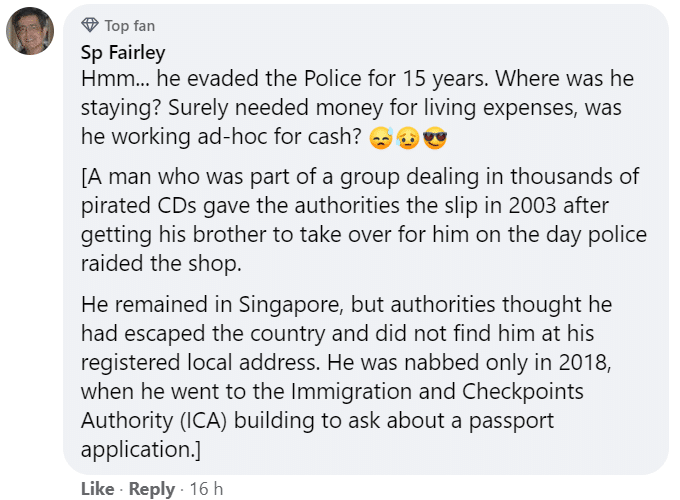 Meanwhile, one person was baffled by how the authorities was convinced that he was out of the country.