On Facebook, a member of the public called out former People’s Action Party (PAP) MP Amrin Amin for being “out of touch” when he said that the faux pas by the People’s Association (PA) of using a Malay couple’s wedding photo as a Hari Raya standee without permission is “not ‘racists’”.

Mr Amrin, however, responded by calling him a “snowflake”, which drew a lot of flak from other netizens.

In the comments section of Mr Amrin’s post on Monday (14 June) about the incident, a netizen replied that other minorities do not have to agree with Mr Amrin’s assessment of whether the incident is racist or not.

He wrote: “No offense, but just cos you don’t see it as racist don’t mean the rest of us minorities have to agree with you. Stop being out of touch.”

Soooo I called out a certain former MP for his extremely disappointing lack of sensitivity in the PA-Sarah Bagharib issue and he had this to say to me. A former MP. pic.twitter.com/M3Py9LRMJW

The reaction to Mr Amrin’s reply has been one of irritation and disbelief as netizens slammed the former politician’s response as “shocking” and “inappropriate”, with one person suggesting that this is why he was voted out in the last elections.

Another said, “Your inability to have an open debate regardless of where you stand shouldn’t result in petulant name calling. Very disappointing and once again, highly inappropriate.”

Another netizen said that Mr Amrin should be above petty name calling given that he is a public figure while one person pointed out that his response was not professional. The word snowflake is derogatory slang for a person deemed to be very sensitive or easily offended. According to the Collin’s Dictionary definition, it means: “Someone deemed too emotionally vulnerable to cope with views that challenge their own, particularly in universities and other forums once known for robust debate.”

In his post on Monday (14 June), Mr Amrin shared the PA’s latest statement on the use of the wedding photo in its Hari Raya decorations at Radin Mas which caused an uproar two weeks ago when the woman whose photo was used called out the PA for its actions.

Following the incident, the PA issued a public apology, however Ms Sarah Bagharib said that the apology shed light on “glaring gaps” that reflect a “very superficial understanding of the gravity of the issue”.

In response, the PA made a statement on its Facebook page on Monday referencing her interview with Nanyang Technological University professor Walid Jumblatt Abdullah, from which she was quoted as saying that the incident has perpetuated a culture of racism.

The PA said: “These are accusations we reject. While the error was culturally insensitive, it was certainly not racist. It is not right to raise the allegation of racism, without basis, to stoke emotions and sentiments.”

The organisation claimed that it had explained to Ms Sarah that while it acknowledges that its staff “should have been more culturally sensitive”, it is not right to paint “sweeping conclusions from this incident”, adding that it was an “isolated case”.

The PA went on to describe Ms Sarah’s public call for messages or suggestions that they would like to have relayed to the organisation in their meeting as “odd”, adding that it does not see why that meeting should be “appropriated” as platform for public grievances unrelated to the incident.

As such, the PA said that it will not be following through with the meeting as there is “no point” in doing so, in light of the above.

Sharing the PA’s statement on his own Facebook page on the same day, Mr Amrin wrote that the lesson in this who situation is that while it is wrong to use a person’s photo without permission and that weddings do no equate to Hari Raya, what the PA did was not “racist”.

“As we call out racism, we must be careful not to label every error as borne out of racism or ‘racist culture’.” said the former MP of Sembawang GRC.

He went on to say that while it is crucial to point out shortcomings, people should not be too hasty to “cancel” and always look out for “opportunists eager to score points in their desire to gain mileage at any cost, without regard to sincere ongoing ground efforts”.

He concluded, “Grace is important in building harmony in a diverse society. No one is perfect. It’s a work-in-progress. Not every slip is Armageddon.” 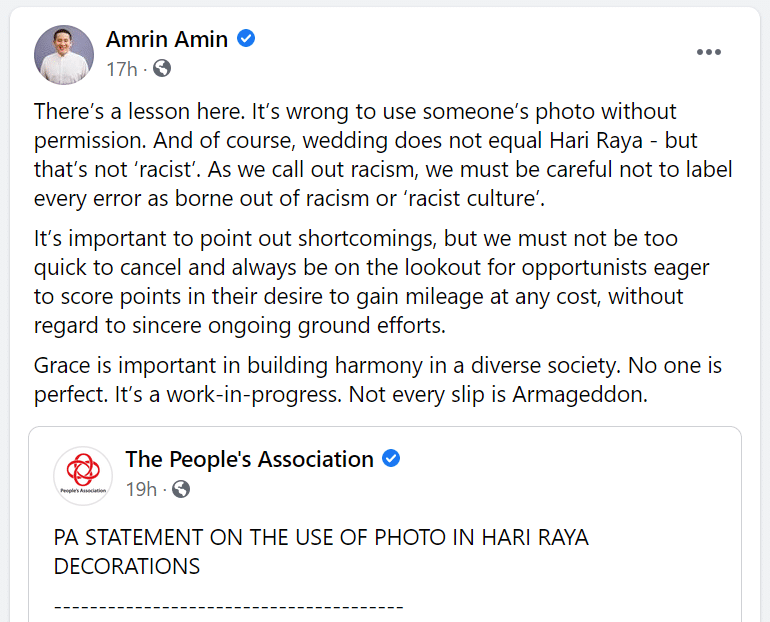 Mr Amrin’s remarks, however, were largely met with indignation from netizens, having received over 700 comments so far and shared over 150 times. Some expressed shock at this response for calling Ms Sarah an “opportunist”. Many pointed out that Mr Amrin appears to be out of touch with his community and that they are glad he is no longer in office as his views do not represent that of the people in the Malay community.

One person noted his biasedness in the situation and cited it as one of the reasons he was not reelected into parliament in the last elections.

Others echoed the commenter above who noted that just because Mr Amrin doesn’t see it as a racist incident doesn’t mean that everyone else doesn’t either and that he should not invalidate their experiences. One person noted that the chain of events is “odd and concerning”, nothing that it appears that Mr Amrin wants to define what racism is without considering other people’s perception. The netizen commented, “the implicit message is that the construction of social norms rests in the hands of those who eild power”. He questioned whether Mr Amrin thinks this approach is conducive to cultivating an inclusive society and combatting racism. A couple of people also focused on Mr Amrin’s remark that people “must not be too quick to cancel”, pointing out that the PA themselves were quick to cancel their scheduled discussion with Ms Sarah. For just US$7.50 a month, sign up as a subscriber on The Online Citizen Asia (and enjoy ads-free experience on our site) to support our mission to transform TOC into an alternative mainstream press.
Tags: Amrin Amin