Following the open letter on 20 May by 12 doctors who called for children to be given the ‘killed-virus’ vaccines instead of mRNA vaccines, businessman and former Nominated Member of Parliament (NMP) Calvin Cheng took to Facebook on Saturday (22 May) to slam the letter as being irresponsible.

The counter, however, had the flavour of an ad hominem attack where Mr Cheng slammed the doctors behind the letter as being “irresponsible GPs”.

“They are general practitioners who got a degree in medicine, who then either chose not to specialise in a certain field, or were not chosen to be specialists. So they become GENERALISTS,” he expressed.

Mr Cheng continued, “They look after everyday illnesses, and once an illness or disease is too complex for them, they refer them to the expert in that illness, a specialist.”

“In this case, the specialists we need to listen to are those with expertise in infectious diseases and vaccines.”

Mr Cheng went on to quote Professor Ooi Eng Eong of Duke-NUS Medical School, an expert in emerging infectious diseases who has been involved in the development of the mRNA vaccine, saying that the argument in the open letter was “pseudoscience” and is based on “a lot of misunderstanding of molecular biology and immunology”.

He included a quote from Prof Ooi who had said in a Straits Times report: “The development of mRNA vaccine, although rapid, was based on more than 20 years of painstaking research. This vaccine technology was not assembled in a hurry. Instead, the world was fortunate that this technology matured at a time when it was needed most.”

Mr Cheng noted in an edit made to the post that primary healthcare is important and that general practitioners are front liners and are valued, “but they are not specialists and definitely not vaccine specialists”.

In the comments section of his post, he wrote: “Some of the doctors were the ones who jumped the science and told everyone to wear surgical masks during a time when medical professionals were in short supply. In the end, the science proved that masks were necessary but not because of the reasons they gave.”

He then asserted that the GPs should “stick to looking at common colds and diarrhoea instead of writing letters outside their expertise”. In a separate comment, one netizen pointed out that not all the 12 doctors are GPs, and demanded that Mr Cheng apologise for making a false statement. Replying to the comment, Mr Cheng simply wrote: “No.” In another comment where a GP who goes by the name Dr Hoe Wai Sin had asked Mr Cheng not to edit out his “insulting comments about GPs”, Mr Cheng replied saying that he has to “care for strawberries” – a common insult to so-called sensitive people. Several others, some who appear to be doctors themselves or graduates of medicine, also called out Mr Cheng’s attack on GPs which was “uncalled for”. They were quick to debunk the open letter, adding that GPs are an important aspect of the healthcare system. 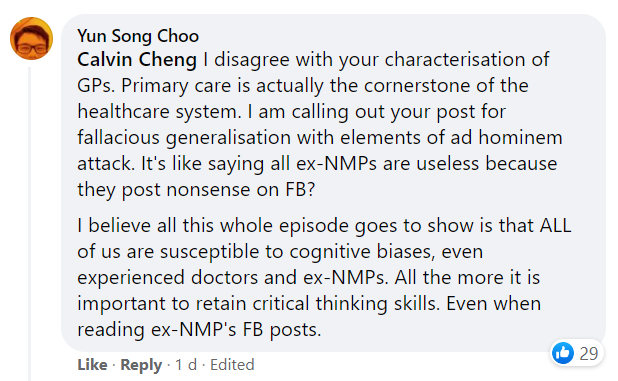 Several hours after Mr Cheng’s post was published, one GP in particular, Dr Hoe, had taken to Facebook to call out Mr Cheng further.

“The letter was written by a mix of doctors including at least one paediatrician and one internal medicine specialist,” she wrote.

“While I do not agree with the choice of platform, there’s no need to bray for blood.”

Dr Hoe went on to stress, “In addition, many GPs choose to be GPs cos it’s our calling. We want to and choose to be primary care physicians. That does not imply we are lousier doctors than specialists. We love our jobs even though we are poorly paid compared to our more glamorous colleagues.”

She elaborated, “For your infor, we do not just treat common colds and diarrhea. We also treat hypertension, diabetes, hyperlipidemia etc etc , acute injuries like foreign bodies etc and we also screen patients when appropriate, referring them to specialists at an earlier stage.

“That actually saves lives, in case you still don’t get it.”

Dr Hoe went on to address Mr Cheng’s point on GP’s not being vaccine specialists and speaking outside their expertise. She noted that she herself has given several talks to the general public on the vaccination program in her capacity as a GP.

“Yes, I am not a specialist, but we GPs possess the common touch, and we know how to break down difficult medical concepts / ‘cheem’ lingo into simple layman terms for our patients, in their native language,” she remarked.

“We certainly do not deserve such disrespect /disdain from you. What have you done for the covid fight lately?”

In an update to her post, Dr Hoe added that she disagrees with calls by netizens to report Mr Cheng or his post as “cancel culture is toxic as it is”.

“I believe in free speech even the nasty ones from him,” she explained.

“In the same vein, I [don’t] think it’s right to cancel Dr Khoo BK even if he doesn’t retract his statement,” referring to the only one of the 12 doctors behind the open letter who has not retracted his statement.

Dr Hoe continued, “At the very least, the letter allows for clarifications to be aired and that can’t be a bad thing. Do not forget that some of the 12 issued an open letter about wearing masks, which turned out to be prescient.”

“We should allow for diversity of opinions even from the likes of [Calvin Cheng]. We should be careful and guard against groupthink and forming echo chambers,” she concluded.

Beyond that, on Tuesday (25 May), President of the College of Family Physicians Singapore adjunct Associate Professor Tan Tze Lee and Director of the Primary & Community Care Division of the Ministry of Health Dr Ruth Lim responded to the furore in order to “address the misinformation in recent social media posts containing inaccurate statements” about GPs.

In a forum reply on The Straits Times titled ‘GPs play critical role in the public health system‘, they stressed that family medicine, as practiced by GPs, is a recognised clinical discipline devoted to the “comprehensive and continuing care of individuals and their family”.

“Many GPs undergo years of postgraduate training before they acquire qualifications that allow them to be admitted to the Register of Family Physicians,” the reply noted.

“With further years of training, they acquire other qualifications that allow them to be admitted to the Academy of Medicine, which is the same body that represents medical and dental specialists in Singapore.”

Stressing that GPs and hospital-based specialists play different roles and bring different skills to the healthcare landscape, Dr Ruth and adjunct Assoc. Prof Tan stressed that “both are essential”.

“In the present Covid-19 pandemic, most generalists are at the front lines attending to patients and performing a critical role in public health, in screening, testing and vaccination of patients,” they explained, adding that some generalists also work in the hospital setting, be it acute or community hospitals.

“When writing about issues in the public sphere, we expect that effort be made to check the facts. In a civil discourse, this is the responsible thing to do.”

The open letter, which was originally posted on the HardwareZone forum but has since been removed, was apparently addressed to “all parents deciding to vaccinate or not vaccinate their child”.

In it, it was said that the mRNA vaccine does not “effectively stop” children from becoming vectors of the virus and passing it on to others. It also supported the more traditionally killed-virus technology vaccines which “has been around for decades and has a very long and safe track record”.

Amidst immediate backlash against the letter from many doctors and scientists, there was also a response on Facebook by Member of Parliament (MP) Dr Koh Poh Koon who said that he was “aghast and disappointed by the unscientific and unprofessional way in which these doctors have interpreted scientific evidence and conducted themselves”.

The retraction which is said to be circulating on WhatsApp noted:

“An open letter to all parents who may have read our letter on 20th May 2021.

“We are a group of Singaporean Doctors, who are of the view that MOH should quickly approve a killed-virus vaccine for our children and adults.

“We like to withdraw all our humble ponderings, as some of our thoughts may be misunderstood by some laypersons. We will henceforth, ponder in a more professional and private forum.”

For just US$7.50 a month, sign up as a subscriber on The Online Citizen Asia (and enjoy ads-free experience on our site) to support our mission to transform TOC into an alternative mainstream press.
Tags: Calvin Cheng