by The Online Citizen
in Comments
Reading Time: 5 mins read
9

Following a week-long saga involving former DJ Jade Rasif and the Ministry of Manpower (MOM), the issue has seemingly finally come to an end after MOM apologised to Ms Rasif for its earlier press statement.

In the update on its Facebook page, MOM said that the ministry has reached out to Ms Rasif on Saturday (22 May) to see how they can address her unhappiness over its earlier press statement on 17 May.

It pointed out that Ms Rasif had left a comment in response to its 17 May Facebook post sharing that she had received two phone calls from the Police on being investigated for breaching a Quarantine Order.

“We understand that the Police have since clarified with Ms Rasif on the purpose of their calls, and that she is not being investigated for any breach of Quarantine Orders.” wrote MOM.

The ministry further noted that the use of the word “inaccurate” and one of the points in its 17 May Facebook post could have portrayed Ms Rasif to be providing an inaccurate account on the Quarantine Order investigation.

“We note that the use of the word “inaccurate” and one of the points in our 17 May FB post could have portrayed Ms Rasif to be providing an inaccurate account on the Quarantine Order investigation. She shared with us that this had affected her negatively. We would like to extend our apologies to her for this.”

The ministry said it would therefore retract this point and redact the word “inaccurate” in its 17 May Facebook post.

In addition, it will also retract a point which stated that MOM had reached out to her family on the complaint made against the ambulance driver.

As for how its officers handled the phone call with Ms Rasif on 18 May, MOM acknowledged that its officers could have done better and been more tactful in addressing Ms Rasif’s questions.

“We assured her that we will improve on this aspect of communicating with our customers.”

MOM ended by stating that it will conduct an internal review of its communications and service delivery processes.

Upon reading MOM’s latest statement, netizens have come forward to call the Ministry a bully in regards to the way it had handled this issue. Penning their thoughts in the Facebook pages of The Straits Times, Channel News Asia, Mothership and TODAY, they have called MOM “incompetent” and a “national disappointment and shame”, adding that its officers don’t do their homework before releasing its press statement on 17 May.

One user wrote: “Grow up and do your actual work lah.. we’re in this mess because you’re inept despite your many illustrious degree holders in mgmt, it’s like watching an incomplete Al at work.” 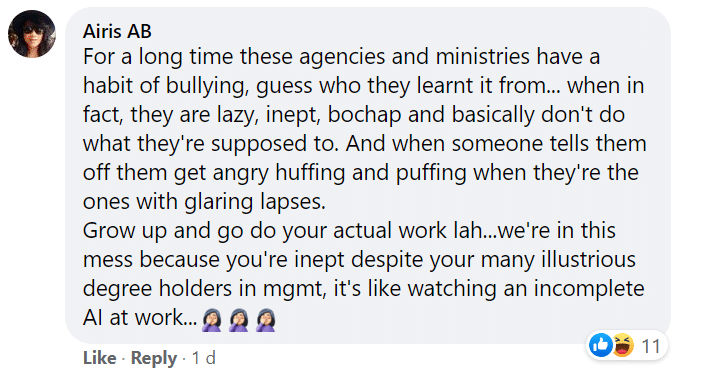 A large number of them thanked Ms Rasif for speaking up and highlighting the flaws in the Ministry. They went on to express that the public officers are “arrogant” and “never apologise or admit they made mistakes”. Many others said that they have now learned to always keep records or conversations they had with public officers in order to proof that these officers have made an error. They added that if there is no evidence, there are high chances that the Ministry would have denied the claims made by Ms Rasif.

Some expressed that the only reason MOM apologised to Ms Rasif was because she is a public figure. They explained that the Ministry would have not extended an apology if this were to happen to a normal citizen.

Others asked if POFMA can be issued to MOM for its “inaccurate” statement, or if this act is only applicable to regular citizens.

One user felt that MOM’s apology was not sincere, while a couple of them pointed out that they are not sure if they can trust any future statements from MOM following this blunder.

For just US$7.50 a month, sign up as a subscriber on The Online Citizen Asia (and enjoy ads-free experience on our site) to support our mission to transform TOC into an alternative mainstream press.
Tags: Jade Rasif