In an attempt to provide better clarifications in the case of questionable quarantine orders received by a migrant domestic worker (MDW), former Singaporean DJ and model Jade Rasif took to Instagram on Thursday evening (20 May) to publicly share phone conversations, WhatsApp messages and email correspondence with officials from the Ministry of Manpower (MOM) and others.

She shared these exchanges to point out that her version of the story is not inaccurate, contrary to what MOM had earlier claimed in its press release.

This saga started earlier this week (16 May) when Ms Rasif, who is currently a full-time healthcare worker, revealed in a series of Instagram Stories that her MDW, an Indonesian national, was sent back home after observing only three to four days of quarantine period at a quarantine centre.

However, the MDW was asked to test for COVID-19 two weeks after her release, and her test results came out positive. She was subsequently sent to a quarantine centre.

Ms Rasif also noted that she and her family were not given any quarantine orders (QOs) though they were a close contact of the helper.

Additionally, Ms Rasif also said that two police officers called her to investigate for violating QO, which she claimed she had not received.

Responding to this, MOM released a press statement on Monday (17 May) stating that the former model’s account was “inaccurate” and that her MDW has been “assessed to be free from current COVID infection and had not posed a risk to her employer’s family”.

Disagreeing with MOM’s response, Ms Rasif wrote in the comment section of the Ministry’s post, stating that she stands by her original version of the story. She also noted that she has all the evidence to prove her account, and would be happy to pass them to the Ministry to help them with their investigations. 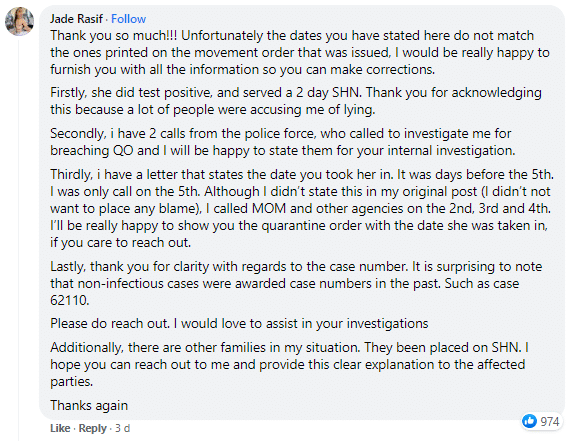 Later on Tuesday (18 May), the former DJ revealed in another Instagram Story that MOM had allegedly “apologised and admitted that their press release was inaccurate, and made without sufficient research”, after looking at the evidence presented by Ms Rasif.

She added, “I have extended the opportunity for us to re-release a joint statement to reveal the truth to the public.”

However, there has so far been no official statement from MOM to apologise over the press release alleging Ms Rasif’s account being inaccurate. TOC has also written to MOM if it will issue a correction statement to clarify the matter but has not received a response so far.

In Thursday’s Instagram Stories, Ms Rasif started off by stating the MOM started “beef” with her by calling her story inaccurate and mentioning her name in its press release.

She added that MOM is the one to be blamed if it ends up looking bad in the eye of the public for the mess it created with the quarantine orders.

To explain her side of the story, Ms Rasif shared a WhatsApp conversation with a manager from MOM who asked her to take down her posts, presumably the ones that mentioned that MOM has admitted its error.

The manager asked her to do so as the Ministry is still working on releasing a joint statement to clarify and address its errors.

As a reply, Ms Rasif wrote: “I can change it? But it’s accurate to what we discussed. I just wanted to provide an update/holding statement while waiting”, adding that the officer had then ghosted her for two days without providing any updates.

Separately, in response to MOM’s claim that Ms Rasif was investigated by the police for breaching quarantine orders, the former model shared another phone conversation she had with an officer from MOM who clearly said that they had not received any updates from the police before making its claim in the press statement.

She also disclosed a phone conversation she had with a police officer who said that she was just part of a preliminary investigation and not an actual investigation.

Seeking clarification for the above point raised by MOM in its statement, an officer from MOM said in his conversation with Ms Rasif that they still clarifying with the Ministry of Health (MOH) on this issue.

He added that there have been some changes in the current operation procedures, and this is why there has been no case number given to Ms Rasif’s domestic helper after she tested positive for COVID-19.

“Even if there’s a great explanation for the missing case numbers, don’t say you’ll set out the facts when a full day after publishing your statement, you still have no facts! You’re both managers and you don’t have the facts,” she wrote in her Instagram Story.

He also went on to apologise for releasing a statement with no proper explanation on what had actually happened.

Ms Rasif wrote: “It’s ok to not know, but implying that I’m inaccurate and you’re stating ‘facts’ is just weird. Even if this was true, you didn’t know it was true when you said it.”

“Are u worried that managers at MOM, in charge of quarantining thousands of workers have no idea what the SOP was and didn’t bother to learn till an influencer asked?

“I just didn’t say it until the Ministry of Manpower started beefing with me on Facebook,” Ms Rasif wrote.

No response from email correspondence

The social media personality also shared screenshots of an email exchange she had with MOM where she furnished them with all the necessary information that they wanted to carry out its investigation against an ambulance driver who allegedly was rude to her.

She submitted all the details and evidence to them on 6 May but did not receive any reply from MOM after that.

However, in MOM’s statement on 18 May, it said that MOM has reached out to Ms Rasif about the complaint, but is still waiting for the former model to send them the details.