SG ranks 2nd highest in world in terms of infections per mil population involving B.1617 variant

66% imported case into Singapore in past month from South Asia

In response to media queries on the number of imported COVID-19 cases who were short term visitors, the Ministry of Health (MOH) issued a press release yesterday (15 May) attempting to “clarify” the issue.

MOH said that the B1617 variant is “not just a Singapore problem”.

“The B.1.617 variant prevalent in South Asia is not just a Singapore problem. The WHO has deemed it a variant of global concern,” MOH said with regard to the B.1617 variant which was first detected in India last year.

“According to the Gisaid Institute, Europe has sequenced almost 2,000 B.1.617 infections, US 486, Australia 85, Japan 29 and China 17. This is a major reason why transmission is rising throughout Asia — in Malaysia, Thailand, Japan. Even hitherto safe regions, such as Singapore, Taiwan and Vietnam, are experiencing outbreaks of community cases.”

MOH added that all it takes is one case to cause an outbreak, and no country can seal itself off totally. At the minimum, citizens and residents must be allowed to return home, it said.

“For imported cases in Singapore, we reported 409 cases over 28 days from 16 Apr to 13 May. 41.6% of them were SC/PRs, 50.6% were Work pass holders, student pass holders or dependents, and 7.8% were short term visitors. All short term visitors are allowed to enter only if they have family ties here, or on specific compassionate grounds such as to attend a funeral, or seek medical treatment.”

That is to say, the majority of the imported cases over the past month or so were not exactly citizens and residents. And out of the 409 imported cases, 271 or 66% were from South Asia.

“If we just look at South Asia, the number of imported cases over the past 28 days was 271, comprising 50.2% SCs/PRs, 46.5% work pass holders, student pass holders or dependents and 3.3% short term visitors,” MOH revealed.

“Every arrival is subject to stringent SHN and tests. Community transmission occurred nevertheless because the virus breached our safe measures, including at Changi Airport… This is a challenge faced by all countries because no one can entirely close their borders.”

MOH didn’t reveal the number of cases which contracted the B.1617 variant in Singapore but according to the Gisaid website, as of today (16 May), the number was 156. Singapore currently ranked 4th in the world with the highest number of infections involving the B1617 variant. 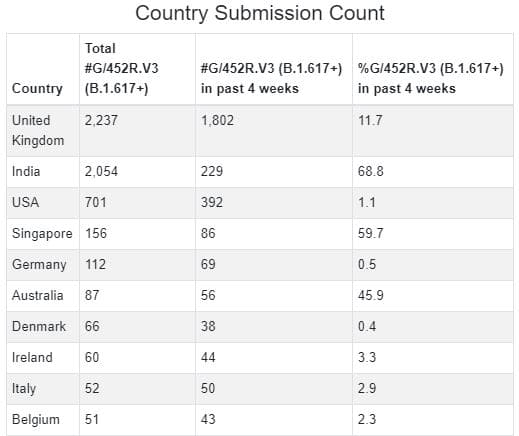 However, in terms of B1617 infections per million population, Singapore now ranked the second highest in the world after UK:

Last Monday (10 May), the World Health Organization (WHO) announced that the B1617 variant will be classified as a “variant of global concern”, with some preliminary studies showing that it spreads more easily.

“We are classifying this as a variant of concern at a global level,” Maria Van Kerkhove, WHO technical lead on COVID-19, told a briefing. “There is some available information to suggest increased transmissibility.”

The variant has already spread to other countries, and many nations have moved to cut or restrict movements from India.