At the same time, about 50% of workers in Singapore do not earn enough to pay taxes

Foreigners account for about 28 per cent of resident personal income tax payers and contribute approximately 32 per cent, or S$3.7 billion, of personal income tax revenue per year on average over the past five years, said Deputy Prime Minister and Finance Minister Heng Swee Keat in a written reply to a parliamentary question on Monday (10 May).

The question, posed by Progress Singapore Party’s (PSP) Non-Constituency Member of Parliament (NCMP) Leong Mun Wai was on the estimated breakdown of each type of tax paid by holders of Employment Passes, S Passes, Work Permits, Dependant Passes, Long-Term Visit Passes, and other foreigners working or living in Singapore.

In his reply, Mr Heng noted that the tax system has been designed to be “progressive and fair”, adding that it does not generally differentiate by nationally.

As such, the Ministry of Finance (MOF) does not have a detailed breakdown of tax paid by different groups of foreign taxpayers by pass type. However, Mr Heng did give a breakdown by tax type.

Apart from personal income tax, foreigners residing in Singapore as well as tourists account for over 40 per cent of the net GST. This is after taking into account the GST refunded under the Tourist Refund Scheme and the GST Voucher scheme for Singaporean households.

As for property-related taxes, Mr Heng noted that there is a progressive system for residential properties in place, where higher-value properties are subject to higher property tax rates and Buyer’s Stamp Duty (BSD).

On this, he merely stated that “most properties in Singapore are purchased and owned by locals rather than foreign work pass holders”, though he did not provide a specific figure.

Mr Heng went on to say, “But we recognise that there continues to be a strong buying interest from abroad in Singapore residential properties, vis-à-vis the relatively small size of the Singapore market.

“Hence we had put in place the Additional Buyer’s Stamp Duty (ABSD) as a property market cooling measure, with foreign buyers subject to higher ABSD rates.”

Here, foreigners accounted for about S$174 million, or 16 per cent, per year of ABSD revenue from property purchases by individuals over the last five years.

Interestingly, during an exchange earlier that day in Parliament between the two parliamentarians, Mr Heng had stressed that the claim of workers carrying the burden of paying for various government expenses is “wrong”.

He was responding to Mr Leong’s speech in response to the Significant Infrastructure Government Loan Bill (SINGA) in which Mr Leong had noted that the social security costs are self-funded by Singaporeans.

Mr Leong said, “As a result, the current generation in Singapore has to shoulder a disproportionate amount of the infrastructure and social security costs and has to struggle with a lower level of disposable income giving rise to the phenomenon popularized by Jack Neo’s movie, ‘Money No Enough’.”

According to the Inland Revenue Authority of Singapore (IRAS), residents earning less than S$20,000 a year — which is about S$1,600 a month — do not have to pay taxes. 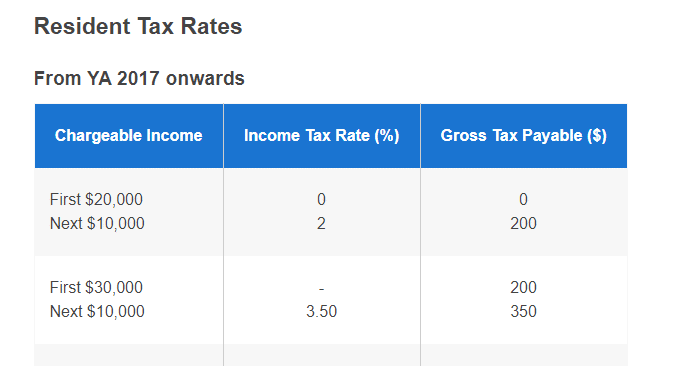