by The Online Citizen
in Comments
Reading Time: 5 mins read
13

Travel between Singapore and Malaysia on compassionate grounds will be permitted from 17 May onwards amid COVID-19 restrictions that prohibit most cross-border movements.

The details of such travel arrangements will be released at a later date, but precautionary steps like testing visitors for COVID-19 and the need for quarantine will be included, said Foreign Minister Vivian Balakrishnan on Sunday (2 May).

Dr Balakrishnan said this along with his Malaysian counterpart, Hishammuddin Hussein, who was on a two-day official visit to Singapore till Sunday.

Mr Hishammuddin explained that the compassionate grounds would involve individuals on either side requesting to cross the borders to be with family members who are critically ill or to attend their funerals.

“When a family crisis occurs, people want to get together. Therefore, bearing in mind this very special close relationship between the people of Singapore and the people of Malaysia, it is necessary to have schemes like this,” said Dr Balakrishnan.

Dr Balakrishnan said that further details on the types of tests and quarantine arrangements relevant to this arrangement will be released later by both countries’ respective immigration authorities.

Besides this, the two leaders also spoke about a potential air travel bubble between the countries.

Mr Hishammuddin noted that further negotiations need to be conducted between the transport ministries of both countries before proceeding further.

They also discussed the prospect of mutually recognising vaccine certificates to ease cross-border travel for people on both sides of the border in the future.

Mr Hishammuddin pointed out that this will be done digitally, and the digital contact tracing tools of Singapore and Malaysia need to be compatible with each other for this to work.

The decision to permit cross border travels on compassionate grounds is the latest added to a series of agreements the two countries have signed to deal with the effects of the pandemic.

Other such moves include ongoing works to progressively reinstate cross-border travel for other groups of travellers, the Periodic Commuting Arrangement (PCA), as well as the Reciprocal Green Lane (RGL), which had been suspended since Feb.

Under the PCA, those who have been permitted to travel must remain in their country of employment for a minimum of 90 days before going back to their home country for short-term home leave.

These travellers can only access the land borders — via the Causeway and the Tuas Second Link — and they must observe a 14-day stay-home notice upon entering Singapore before being swabbed for the coronavirus.

As for the RGL, it is to facilitate short-term essential business and official travel between the two countries. Those under this can only travel for up to 14 days and must follow a controlled itinerary. For instance, they cannot use public transport except for private-hire cars and taxis.

In a joint statement from the two ministries on Sun, both said that even with the challenges faced during the pandemic, bilateral relations and cooperation remain strong, which can be seen by the uninterrupted movement of goods between both countries.

Dr Balakrishnan said that Singapore and Malaysia have not completely shut their borders and still allowed essential supply chains carrying medication, food and other supplies to go in and out of the two countries.

“Even as the COVID-19 pandemic continues to challenge both our countries, rest assured we will work very closely together, we will support each other, and our people-to-people ties will be protected and will be nurtured,” he said.

Netizens against cross-border travel even on compassionate grounds

On social media, online users were quick to express their disapproval of the Government’s move to consider allowing people to cross the borders on compassionate grounds.

Penning their thoughts on The Straits Times’ Facebook page, they said that allowing cross-border travel between Singapore and Malaysia is a bad idea at the moment, given the rising number of COVID-19 cases in the latter country.

They added that allowing such travel arrangements will increase the risk of imported cases in the country, adding that Singapore “cannot afford to have another circuit breaker”. Some pointed out that the public might soon find loopholes in this travel arrangement so they can cross the border.

One user wrote: “Very soon, many people will use all sorts of ‘compassionate reasons’ and, those who’re resourceful would be able to provide relevant services such as ‘sell’ required certificates or certifications”.

However, others expressed surprise on how people are only allowed to conduct cross-border travel on compassionate grounds now when Singapore and Malaysia share close bilateral ties.

They questioned why travellers arriving from India were allowed to enter Singapore a lot earlier under more lenient rules.

A number of online users opined that allowing cross-border travel between Singapore and Malaysia is not a bad idea, as only a limited number of people will be allowed to travel. 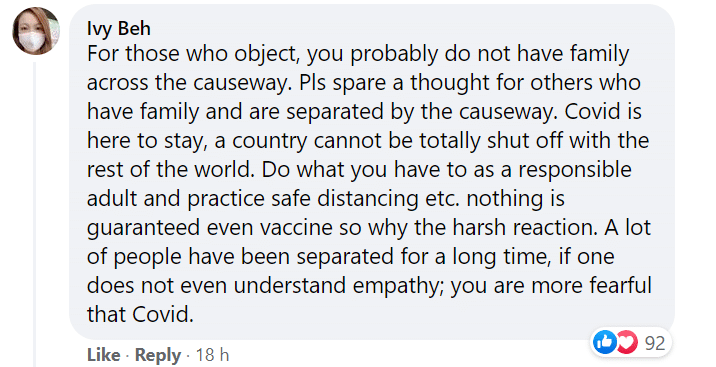