One of the highlights of the reshuffle include Education Minister Lawrence Wong taking over the Finance Ministry portfolio from Deputy Prime Minister Heng Swee Keat.

Mr Wong has been holding the position of Second Minister for Finance since 2016 and was just appointed Education Minister last Jul.

Other shifts include former Trade and Industry Minister Chan Chun Sing taking up the Education portfolio.

Transport Minister Ong Ye Kung will take over the Health Ministry from Gan Kim Yong who has held the position for nearly a decade.

Mr Gan is moving to be Trade and Industry Minister, taking over Mr Chan’s old role.

Former Communications and Information Minister S Iswaran will now lead the Transport Ministry while maintaining his role as Minister-in-charge of Trade Relations in the Ministry of Trade and Industry.

Manpower Minister Josephine Teo was appointed to helm the Ministry of Communications and Information, while keeping her position as Second Minister for Home Affairs.

Finally, Dr Tan See Leng will replace Mrs Teo as Manpower Minister. He will also continue his role as the Second Minister for Trade and Industry.

The cabinet reshuffle has been met with reservations and some scepticism by netizens on CNA’s and The Straits Times‘ Facebook pages.

A few people wondered about the effectiveness of making changes when the Education and Transport Ministers were appointed just recently, pointing out that major changes in such a short period of time do not inspire confidence. Many took the opportunity to drunk on Mr Chan being appointed as Education Minister, quoting his verbal slip in a podcast when he said, “We don’t have too many sheep in Singapore to produce cotton.”

Many also zeroed in on the fact that Mr Wong is taking up the Finance Ministry from DPM Heng Swee Keat.

Netizens felt that this is a sign that Mr Wong is a frontrunner to be the next Prime Minister after PM Lee steps down. 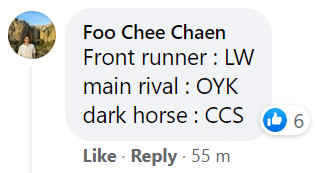 One person was clearly not thrilled by the prospect.

Others noted that the reshuffle does not offer significant changes, as it only comprises the same ministers being moved around the different ministries.