The Financial Times reported that India’s rupee is tumbling as new COVID-19 wave surges and threatens the economic recovery in India.

With India now battling a ferocious new coronavirus wave, investors are concerned that the nascent economic recovery in India will crumble.

The rupee has dropped about 3 per cent to 75.14 per USD since the start of April, the worst performance among a basket of two dozen emerging market peers tracked by Bloomberg which includes Russia’s rouble and Turkey’s lira. 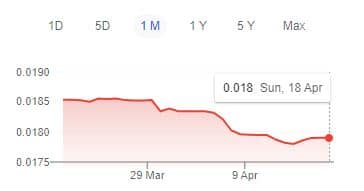 The currency’s tumble follows a surge in COVID-19 cases that has overwhelmed India’s health systems and stoked public outrage as the government struggles to supply sufficient vaccines. It will also likely compound corporate India’s financial woes and complicate the central bank’s plans to use monetary stimulus to soften the economic blow.

“The surging virus cases are hitting everything,” an analyst said, pointing to a sell-off in Indian equities that has pushed the benchmark Sensex index more than 5 per cent lower since hitting an all-time high in February.

A new double mutant variant of the COVID-19 virus has also been reported to have emerged in India. Health experts fear that the new variant may enable an even faster transmission of the virus in India.

The rising cases have resulted in a series of lockdowns and curfews, which analysts fear will upset what was expected to be a robust business and economic recovery from last year’s contraction. The potential for gross domestic product and earnings downgrades are also weighing on the rupee.

“The aggressive resurgence of the Covid-19 pandemic is starting to impact growth prospects,” economists at ANZ wrote in a note. “Corporate earnings forecasts may be downgraded in the coming months and foreign portfolio flows may suffer.”

Foreign investors have ditched Indian assets on concerns over the country’s growth prospects, selling more than Rs40 billion of equities so far in April, marking the first such net outflows since September.

“Until and unless we get clarity on the Covid scenario,” said Abhishek Goenka, chief executive of advisory firm IFA Global, “I think the rupee weakness is likely to stay.”

According to media reports, Singapore has emerged as the top investor in India in the last FY, with a total of US$14.67 billion in investments. In the past two financial years, Foreign Direct Investments (FDI) from Singapore to India has surpassed that from Mauritius

Experts said that Singapore has been able to outpace Mauritius with its ease of doing business policies, simplified tax regime and a large number of private investors.

Much of the investments from Singapore to India so far came from the Singapore government and GLCs.