Law and Home Affairs Minister K Shanmugam on Saturday (27 Mar) commended the public confidence in the Singapore Police Force (SPF), saying that the police has gained a level of trust that “many police forces around the world cannot even consider as a possibility”.

Earlier on Wednesday (24 Mar), the Institute of Policy Studies (IPS) released its cross-national study of public attitudes and values which found that about 87 per cent of people polled in Singapore said they were confident, or very confident, with the SPF.

The study, which is part of the global World Values Survey, was conducted by Dr Mathew Mathews, Dr Teo Kay Key, Melvin Tay and Alicia Wang.

It had involved around 80 countries and 130,000 respondents, with about 2,012 Singapore citizens and permanent residents aged 21 and above have been surveyed, as reported by TODAY.

The Government of China was ranked the highest with 94.9 per cent.

IPS also revealed that 36 per cent of Singapore residents polled said they were confident that there were zero people in state institutions who are involved in corruption.

Citing the IPS’ study, Mr Shanmugam took to his Facebook on Saturday to commend the high level of public confidence in the SPF.

“MHA/Police surveys regularly show that 90% of our people trust our police force. Singapore also recently topped the Gallup 2020 Global Law and Order list, for the sixth year in a row.

“We are very fortunate to enjoy this level of trust, a level that many police forces around the world cannot even consider as a possibility,” he wrote.

The Ministry of Home Affairs (MHA) spent a total of S$6.87 billion for the last financial year, an increase of S$191.63 million over the S$6.68 billion of actual expenditure in 2019, according to the Revenue and Expenditure Estimates released by the Ministry of Finance (MOF).

Of the S$6.06 billion, the Ministry spent S$332.9 million on international and public relations last year, an overbudget of S$258.1 million over its earlier estimate of S$74.8 million. 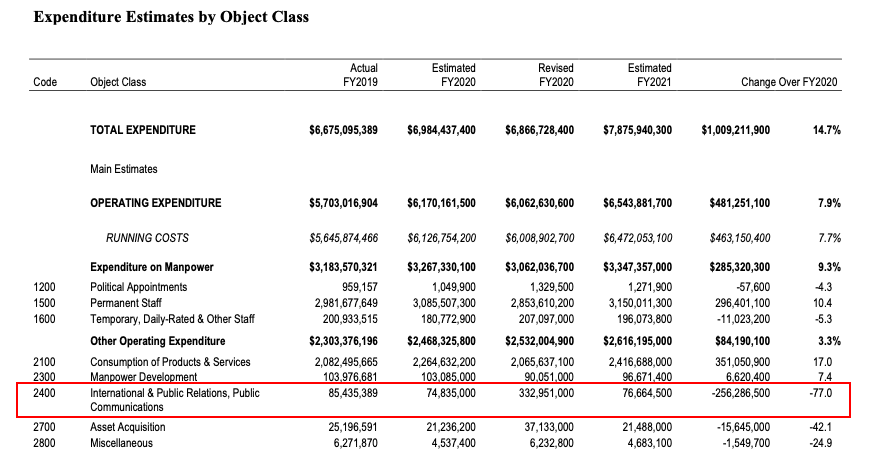 In terms of the development expenditure, the Ministry had allocated a total of S$804.10 million last year, which is lower than its earlier estimate of S$814.27 million.

For just US$7.50 a month, sign up as a subscriber on The Online Citizen Asia (and enjoy ads-free experience on our site) to support our mission to transform TOC into an alternative mainstream press.
Tags: K Shanmugam

Could Mr Shanmugam be using the “race card” to prevent Parliament from looking into our immigration policy too closely?