“Worse still, at one point, the patient nearest to me to my left was happily coughing away – sans mask! The patients in question seemed to don and doff their masks as they pleased."

A man has claimed that Khoo Teck Puat Hospital (KTPH) allegedly allowed its patients to be mask-less in the hospital and breach the COVID-19 safe distancing rules.

Faustin Hogan said in a Facebook post on 24 February that he encountered these practices at the hospital after being admitted for a kidney stone issue.

Mr Hogan explained that he first went to KTPH early last month after experiencing pain from a ureteric stone.

While seeking treatment at the hospital’s emergency department, he noticed that three patients at the hospital’s observation area did not wear their masks for a long period of time, adding that one patient was constantly coughing with no mask on.

“Worse still, at one point, the patient nearest to me to my left was happily coughing away – sans mask! The patients in question seemed to don and doff their masks as they pleased,” said Mr Hogan.

He also noted that there were many medical staff in the observation area, and they did not say anything about it.

If that’s not all, Mr Hogan said that the gurneys at the emergency department were also placed too close to each other, disregarding the COVID-19 safe distancing rules.

When he returned to the hospital after three days due to severe pain, he was admitted and moved into a five-bedded ward.

However, Mr Hogan noted that he was the sixth patient in the ward, and was placed in between two patients’ bed.

He recounted, “My gurney was squeezed between two beds and was less than a metre apart from either bed. I was the sixth patient in a room meant for five. I was told at the A & E that all other wards (A and B wards) were reserved for Covid patients. I couldn’t sleep a wink that night as the gurney was quite narrow and uncomfortable.

“The next day after the patient next to me was discharged, I ‘took over’ his bed. I underwent surgery to remove the stone later that evening. That night, another patient was brought in on a gurney (just as I was the night before) and positioned next to my bed. Again, his gurney and my bed were in such close proximity, I could touch his gurney while lying in my bed!”

Mr Hogan expressed that the hospital should have at least informed the patients that there are limited wards, which would give them an opportunity to seek medical treatment elsewhere if preferred.

What’s more, during his stay in the hospital, he claimed that he had heard the medical staff telling patients that they are not required to wear a mask.

“During my two-and a half-day stay at the ward, I was told more than once by medical staff that patients were not required to put on masks. I couldn’t quite believe what I was hearing,” Mr Hogan wrote.

A week after he was discharged from KTPH, he got himself admitted at Mount Elizabeth Novena Hospital as he suffered complications from the surgery.

During his stay at the private hospital, Mr Hogan was once again informed by the hospital staff that patients are not required to wear masks in their rooms. All the rooms at the hospital are single-bedded.

“As for Mount Elizabeth Hospital, the people who run the hospital ought to know that medical staff come into a patient’s room numerous times in a 24-hour cycle to take a patient’s BP, draw blood samples, dispense medication (among the many other tasks that they have to carry out),” he wrote.

Mr Hogan also left a comment on Channel NewsAsia’s Facebook post to briefly share his experience at these hospitals. A member of the public replied saying that patients at Singapore General Hospital (SGH) are also “not required to wear mask in the wards”. 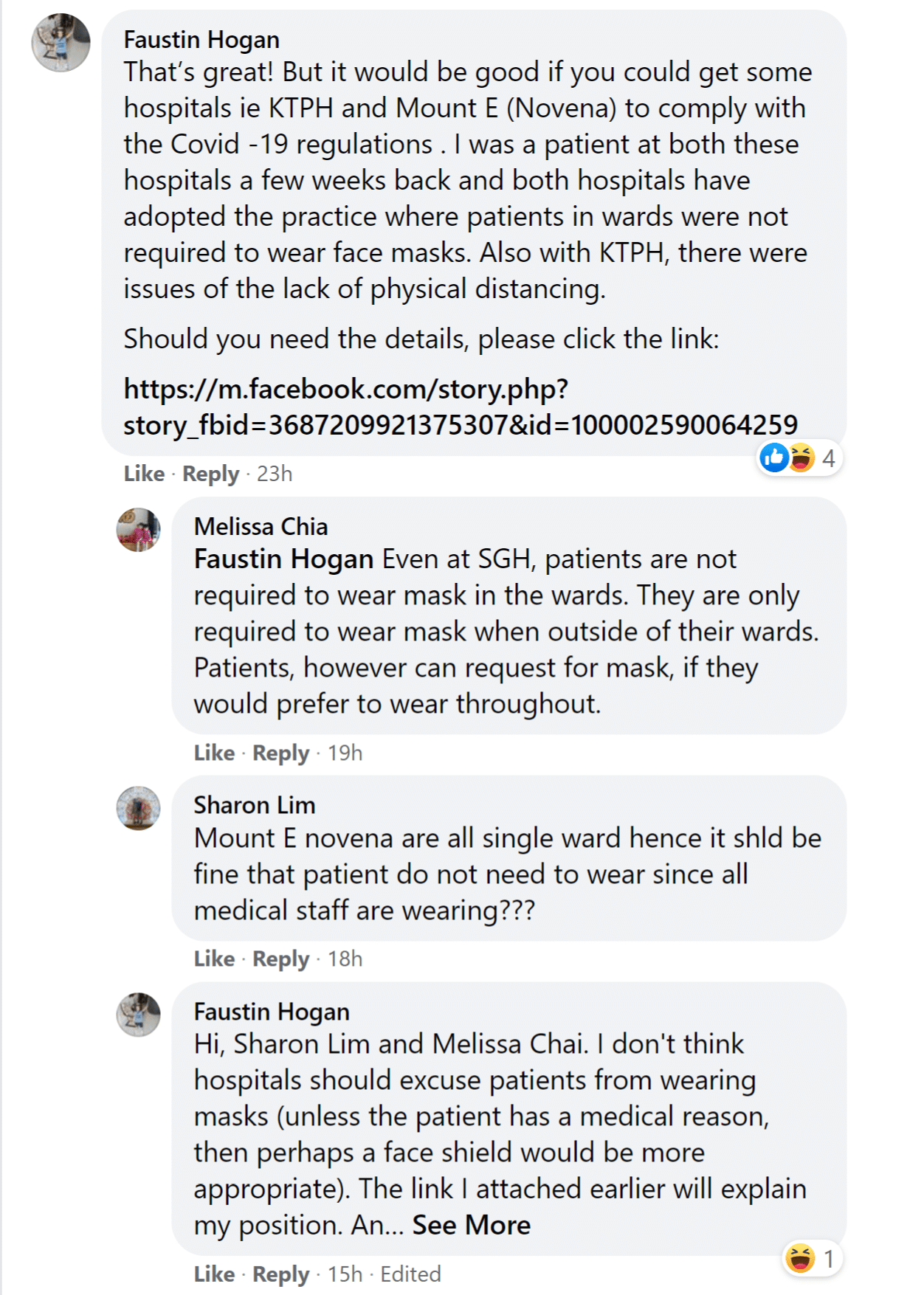 Mr Hogan told TOC, “I have commented on the ST, CNA and MOH pages on FB (Facebook). Neither of the two hospitals in question nor the MOH has responded. Yesterday, on my comment on the CNA page, a woman said that SGH has the same practice as the other two hospitals. It’s getting weirder by the day!”

“I can’t believe it is so hard for me to get the glaringly obvious point across ie, that hospitals are allowing patients to go mask-less in their wards! I’m also at a loss for words,” he added.

MOH says wearing mask is compulsory, unless patient is deemed unfit to do so

Moving back to Mr Hogan’s post, he said that on 9 February he called the Ministry of Health (MOH) COVID-19 Emergency Hotline to enquire if hospitals can disregard the mask and social distancing mandates.

To his surprise, none of the supervisors were around to answer his enquiry.

Mr Hogan then called the MOH General Hotline and was told that patients in hospitals must wear mask unless they have been deemed unfit to wear mask by a medical officer.

“He came back on the line and told me that (having spoken to his manager) unless a patient is deemed unfit to wear a mask by a medical officer, all patients must adhere to mask wearing ‘…in accordance with general regulations for the general public’. And so there you have it,” he wrote.

While Mr Hogan understands that patients do not have to wear masks due to medical reasons, he still wonders why can’t they at least don a face shield.

“I wonder if the hospital’s senior executives are aware of what’s happening in their own hospitals. Is this the new ‘protocol’? Who is responsible for this? The buck must stop somewhere,” he asserted.

Mr Hogan continued, “Why are these two hospitals not adhering to the Covid regulations? We are in the midst of a global pandemic…. We all make mistakes and sometimes forget to put our masks on, but the fact that a government-restructured hospital A&E could ignore patients going mask-less right under their noses and that the same hospital encourages its patients in wards to go mask-free, is beyond comprehension.

“I’d like to ask both hospitals in what way do their actions help the Multi-Ministry’s Task Force’s measures to fight the transmission of Covid-19? This is a hospital for Pete’s sake! Both staff and patients need protection. Do you need a Joe Public to tell you this?”

He also called for the CEOs of these hospitals to explain to the public why the safety measures to prevent COVID-19 are not being practiced in the hospital.

“Would the CEOs of these two hospitals care to explain to the public why mandatory mask wearing is being ignored at their hospitals and further in the case of KTPH, why is there overcrowding and non-compliance of social distancing rules,” Mr Hogan questioned.

TOC has reached out to both of the hospitals on 25 February regarding this matter and has yet to receive a response.

For just US$7.50 a month, sign up as a subscriber on The Online Citizen Asia (and enjoy ads-free experience on our site) to support our mission to transform TOC into an alternative mainstream press.
Tags: COVID-19Khoo Teck Puat HospitalMount Elizabeth Novena Hospital