A number of business chambers in Singapore have voiced their concerns about the message being sent across by the Ministry of Manpower’s (MOM) new rule for dependant’s pass holders to get a formal work pass in order to work in the country.

In a report by The Straits Times (ST), they pointed out that many such foreigners have skills and experience that can contribute to Singapore’s economy, and by having a more restrictive rule, it may cause difficulties for companies to relocate staff or senior executive with families.

However, some observers noted that the impact on companies may not be huge, given that dependants with valuable skills can meet the requirements to obtain work passes.

From 1 May onwards, spouses or family members of foreigners working in Singapore on Dependant’s Passes (DPs) will need to obtain a work pass to work in the city-state, instead of a letter of consent, said the MOM on Wednesday (3 Mar).

This means that DP holders’ employers will need to apply for an Employment Pass (EP), S Pass or work permit for them—instead of the letter of consent that they currently use—including the relevant qualifying salary, quotas and levies.

MOM noted that existing DP holders who are currently employed on a letter of consent are allowed to continue working but they would still need to obtain a work pass when their current letter of consent expires.

In order to be qualified for this, they will have to be either the sole proprietor, partner or director with at least 30 per cent shareholding in the business, said MOM.

It added that the company must hire at least one Singaporean or permanent resident (PR) who earns at least S$1,400 and receives Central Provident Fund (CPF) contributions for at least three months.

According to MOM, there are about 11,000 DP holders working in the country with letters of consent, or about 1 per cent of work pass holders. This figure excludes migrant domestic workers.

Commenting on this, managing director of human resources firm PeopleWorldwide Consulting, Dr David Leong, said that while the numbers affected are small, the new rule tilts the balance of probabilities towards Singaporean job seekers.

Business chamber leaders noted that some of the jobs that DP holders take up include part-time teachers in private education, entrepreneurs, roles in foreign chambers and religious institutions, as well as language teachers in local organisations.

Executive director of the Australian Chamber of Commerce in Singapore, Kate Baldock, said that among the Australian community in Singapore, there is a concentration of workers with letters of concerns in certain industries as well as operating sole person enterprises, and these sectors could be seriously affected by the changes.

“We are hearing from certain sectors as well as our SME (small and medium-sized enterprise) and start-up community that this could cause significant challenges,” she said.

On the other hand, Dr Lei Hsien-Hsien, chief executive of the American Chamber of Commerce here, pointed out that many DP holders possess advanced degrees, skills, experience and capabilities that can potentially fulfil niche workforce needs.

A large number of them own small start-ups, which contribute to the growth of the country’s economy, while some offer niche services such as marketing and communications for non-governmental organisations.

“However, due to circumstances, they often require a more flexible working arrangement including part-time or contract work, which the letter of consent accommodated,” she said.

Dr Lei added, “It is much more attractive and reassuring for families to know that there is relatively straightforward option to obtain a letter of consent to facilitate work for dependants.”

“The more serious impact will be one of perception that Singapore is a less welcome place than in the past. And we all know that perception is reality for many people.”

However, some business groups do not see much impact on the new rule.

Lam Yi Yong, CEO of Singapore Business Federation, expressed that most foreign employees in companies here would already have their work passes.

Over on ST’s Facebook post, netizens slammed the business groups for their concern over MOM’s new rule on DP holders.

They explained that Singapore needs actual foreign talents and that DPs deprive locals of getting jobs that are meant for them. 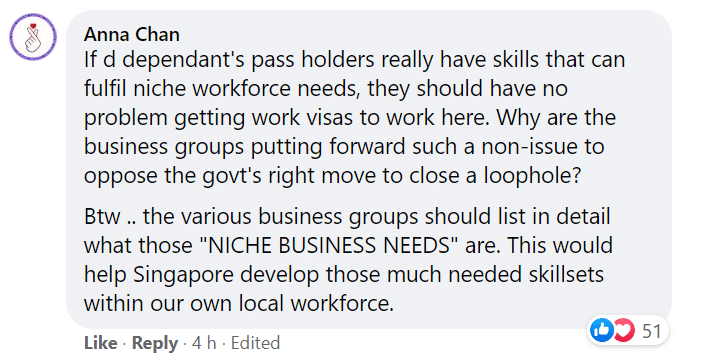 Some questioned why DP holders should be treated differently, and that if they want to get a job in Singapore, then they should apply for EP or S Pass, just like other foreigners who have a job here.

Others questioned the “niche skills” that these dependants have that the business groups have voiced out.

Online users said that the majority of DP holders are spouses or parents or in-laws of work pass holders, and they work part-time doing odd jobs.

As such, they said that these DPs are working in jobs with low salaries without complaining much, adding that this is not “niche skills”.