ITE transgender student allegedly “disciplined” for using women’s bathroom, threatened with criminal prosecution if she continues to do so

This article contains descriptions of incidents involving transphobia, which some readers may find distressing. Readers’ discretion is advised.

Nearly two months after 18-year-old student Ashlee came forward on Reddit about facing discrimination from her school and the Ministry of Education (MOE) for being transgender, an engineering student at the Institute of Technical Education (ITE) was reportedly “disciplined” for using the women’s bathroom.

Elise, who has been working with researchers at the Thirring Institute For Applied Gravitational Research on a Quantum Key Distribution experiment, had faced similar misgendering as Ashlee did from school administrators, and was denied from keeping long hair despite her offer to have her hair tied up when on institute grounds.

Joyce Ng, the project leader for the Quantum Key Distribution experiment, said on Sunday (7 Mar) that this was an “appalling” development from the previous situation Elise was known to face, which is bullying from her classmates.

Here are some redacted chat logs, documenting bullying by peers, and also by staff who “will still treat her as a male student.” This isn’t acceptable in any academic institution. If you’re an academic, help us by spreading the word in your institution and circles. PLEASE RT. pic.twitter.com/XK2JPnVaFR

Ng, alongside Canada-based theoretical physicist Jason Kodish, released screenshots — with Elise’s permission — showing communications between Elise and her lecturers and peers and a ‘transcript of the audio recording for others to verify the veracity of the allegations and claims”.

According to the transcript, Elise’s course manager had reportedly told her that she is not allowed to enter the ladies’ restroom, whether alone or escorted, as her NRIC states that her gender as “male”.

The course manager also warned Elise that any attempts to use the female restroom again would amount to a criminal offence and that the institute’s administration will “take serious action” against her.

Elise was instead told to use the restroom meant for persons with disabilities.

Subsequently, her section head, as seen in the transcript, had addressed her by her ‘deadname’, which a form of misgendering by referencing her by her birth name instead of her preferred name.

While the section head sought to ensure that Elise attends regular appointments with the school counselor, the head had also appeared to rationalise taking disciplinary action against Elise, stating that they “do not want you to get implicated” and that there will be “consequences” if she breaks the rules. 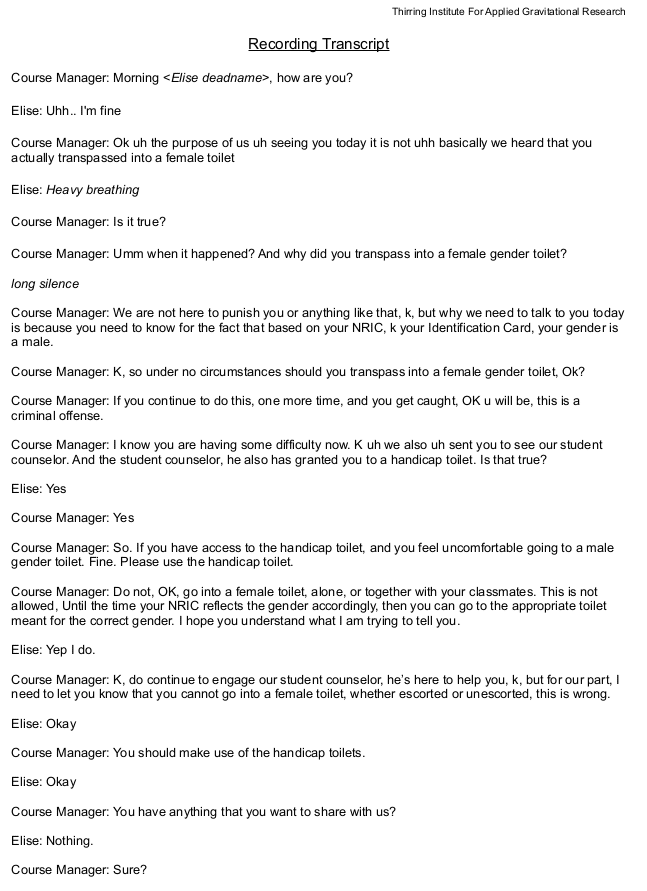 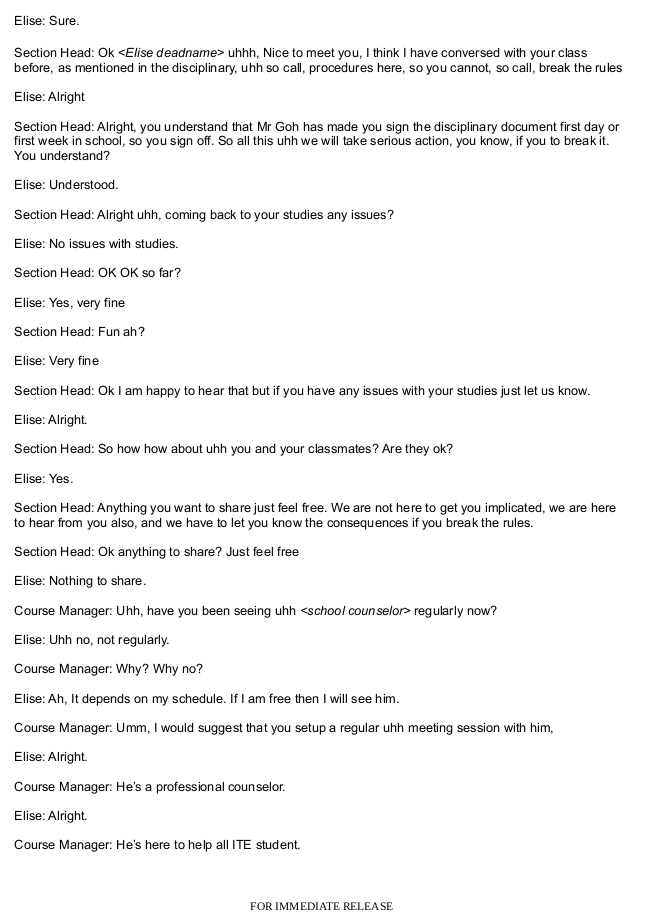 Elise is also prohibited from keeping long hair and was told to use her student card “properly” when she asked if she could wear her hair tied when in school, as seen in screenshots of the relevant WhatsApp correspondence.

She was also told that all the staff in her course will continue treating her “as a male student” and that while the staff would “respect her lifestyle”, she must continue to “respect the rules in ITE”, in reference to how she presents herself.

“It is understandable when Elise tells us that she isn’t comfortable going back to school, as very little is being done to accommodate her situation,” said Ng and Kodish.

Ng and Kodish in their statement on Sunday said that they are “appalled by the handling of the matter by the school staff and administrators”.

“Schools, colleges and other academic institutions should be safe spaces for ALL students, including LGBTQ persons,” they said. “This clearly isn’t the case, when a student is not allowed to use washrooms corresponding to the gender they identify with, and is instead asked to use toilets meant for people with disabilities.”

Asking Elise to do so, they said, has made her feel “segregated” and “singled out for something she didn’t choose to have”.

“As academics, scientists and educators, we can do better to help accommodate people with different needs.

“We live in modern times, where science has improved our quality of life, including our understanding of the matters of gender identity and sexuality, and our policies towards students shouldn’t be stuck in the past,” Ng and Kodish stressed.

“We can do better than this. Elise and other students should not need to put up with archaic school policies for something not within their control. Fix schools and their policies, not students,” they added.

School principal rejected offer to tie up hair as per female student dress code, said ‘females can have short hair too’: Ashlee

Separately, Ashlee, who also claimed in her Reddit post that the MOE had interfered with her hormone replacement therapy (HRT), had earlier said that she was told by the school principal that “females can have short hair too” when she offered to tie up her hair as per the female dress code.

Ashlee also alleged that the principal denied any discrimination and insisted that allowing her to use the wheelchair toilet was “a lot”.

“This is on top of another member of the administration misgendering me as I was sent out of the school compound earlier this year,” she added.

Ashlee also said that in the multiple meetings she had with the school’s administration, the principal had insisted that she intended to “cross-dress in school”, which was not allowed.

“She justified it, saying ‘there is no discrimination’ and ‘we have done a lot to support you’,” Ashlee recounted.

However, Ashlee argued that as she had already been diagnosed by a doctor who explicitly stated that she identifies as female, the use of the term “cross-dressing” is “incorrect by definition”, adding, that it “would in this sense not only be an ignorant, but a horribly discriminatory term, unless I was wearing the male uniform”.

Following Ashlee’s case, Education Minister Lawrence Wong in Parliament on 1 Feb said that the “culture wars” of countries in the West should not be imported into Singapore, and gender identity should not divide the city-state’s society.

Responding to a Parliamentary question from Workers’ Party (WP) Member of Parliament for Sengkang GRC He Ting Ru, who asked about the Ministry of Education’s policies and guidelines on students with gender dysphoria, Mr Wong said that the MOE strives to provide a supportive school environment to support students holistically.

The Minister said that gender dysphoria is a medical condition that varies from person to person. Treatments for gender dysphoria, thus, are also tailored to the individual.

He asserted, “All medical treatment decisions, including the use of hormone replacement therapy, ultimately rest with medical professionals, [as well as] the person with gender dysphoria and their family.”

“Where minors are concerned, meaning anyone below the age of 21, parental consent is required before any hormonal treatment can commence,” he added.

He then stated that such decisions are “beyond the purview of MOE or any education institution,” adding that the Ministry’s focus lies in the school environment and the students themselves.

“We have a duty of care of every student,” said Mr Wong.

For students with gender dysphoria, the Minister said that the main focus of the MOE is in “continuing to provide them with a conducive learning environment” and to “support their overall wellbeing.”

“Recognising that the issues are complex and that there are diverse opinions among students and their parents, we strive to deal with these situations sensitively and with compassion,” he continued.

On Ms He’s question on the level of autonomy schools have in setting policies in this issue, Mr Wong explained that rules are in place to help students cultivate self-discipline.

However, he added later, “Where there are valid medical grounds, schools can exercise flexibility and work out practical arrangements for these students.”

“The schools will consult and work closely with different stakeholders including the relevant medical professionals, the students concerned and their parents, in putting in place these arrangements,” he said.

Adding that each matter is dealt with individually as each student’s situation is unique, the MOE’s guiding principle is to treat students with dignity and respect and to provide students with as much support as possible.

Ashlee reiterated her criticism of the MOE for “blatantly” misgendering her in their Facebook post, despite an official memo from her doctor last year, which states her diagnosis of gender dysphoria and preferred pronouns of “she/her/hers”.

“Like the comments section suggests, this shows little interest in protecting transgender people against discrimination or acknowledgement of the medical community’s professional advice,” she reiterated.

The MOE’s conduct, said Ashlee, suggests that the Ministry purportedly being against discrimination is “a farce”.

She said that she does not see the MOE and the school working closely with and respecting professional advice as the Ministry claimed to do.

“MOE publicly encouraged me to speak to the school’s administration about this issue, which I have explicitly stated that I have done so for a long time,” Ashlee emphasised.

“To me, it seems that they are trying to deny the existence of the meeting between MOE and the doctor, which happened around July-August last year, in which the MOE insisted that schools had to work with and consent before any referral or life-changing decisions was done,” she claimed, adding that her family had already consented long before last year.

Touching on Mr Wong’s “culture wars” comment, Ashlee said: “As far as I am concerned, my personal dressing conforms to the female dress code, and does not affect others in the classroom, let alone personally affect anyone’s personal life.”

“Had the MOE and the school respected my doctor’s proper medical advice and scientific research, I believe this would have ended up very differently,” she added.

Thus, the issue at hand, said Ashlee, is not culture, but rather about “denying proper treatment, directly or indirectly, medical or in education or otherwise”.

“Why is the MOE contradicting and denying proper medical advice, treatment and quality education?” She questioned.