Following wild boar attacks against two people in Punggol on Saturday night, Punggol West SMC Member of Parliament Sun Xueling said that 20 men were activated the next day to search for the animal in question.

However, she did not elaborate on who the 20 men are or which organisation they are from.

In a Facebook post on Sunday (21 Feb), Ms Sun, who is also vice-chairman of the Pasir Ris-Punggol Town Council, said that she was in contact with the National Parks Board (NParks) and the Singapore Police Force (SPF) regarding the attacks, and has been kept updated about the matter by the said authorities throughout Saturday.

“In the meantime, NParks has also put up several signs along the waterway today to advise residents on what to do should they encounter a wild boar,” she said.

Ms Sun, who is also Minister of State in the Ministry for Education and Ministry for Social and Family Development, expressed her hope that the two individuals will “recover soon and that they will also recover from the trauma of the incident”.

The first wild boar attack of the two on Saturday night took place at approximately 9.10 pm at 308B Punggol Walk, while the second saw the person dragged along for about one metre around 20 minutes later at 310A Punggol Walk.

Both individuals were taken to Sengkang General Hospital for treatment.

It remains uncertain if both attacks involved the same wild boar.

One commenter asked Ms Sun as to what measures she and NParks will take to ensure that the wild boar will not come near Punggol residents.

“It is time to put action rather than just asking us to be careful as our kids and old folks are at risk of being attacked for no reason,” they said. One commenter expressed concern over how the frequent wild boar attacks are a result of rapid land clearance and deforestation in Singapore.

“Imagine how many more animals are wandering around without a home,” they said. “Could we look into not clearing any more forests and preserve what’s left?” 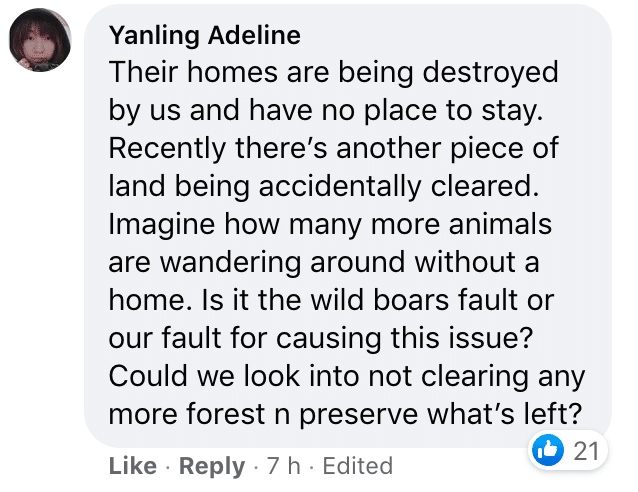 Another commenter highlighted the importance of not feeding the wild boars, especially when doing so is against the law, carrying a penalty of up to S$10,000.

In her post yesterday, Ms Sun shared a link to the NParks advisory on wild boars, which notes that the increase in the population of wild boars may result in a high frequency of conflict between the animals and the human population.

“Although they appear shy, they are still wild animals and are unpredictable in behaviour which could pose a risk to public safety.”

“Like many other wild animals, wild boars will only attack if they are cornered or if they feel threatened,” added NParks.

The Board advises people who encounter wild boars to remain calm and move slowly away from the animal instead of approaching or attempting to feed them.

People are also encouraged to keep a safe distance and avoid cornering or provoking the animal. This includes refraining from taking photos of the wild boar.

Adult wild boars with young piglets, NParks added, should be left alone, as female wild boars are highly protective of their young and are easily provoked if they feel threatened.

In November last year, a wild boar attacked a 50-year-old woman at Sungei Api Api Park. The woman suffered lacerations on her left leg and face.

Separately in the same month, a video started circulating online showing a wild boar along a forest trail path raiding a GrabFood bag attached to a bicycle.

A number of people can be seen gathering around the scene, witnessing the whole incident in awe.