Myanmar protestors call for boycott of Singapore products, says S’pore shows lack of support to the people of Myanmar

Protesters against the military in Myanmar have taken to social media to call for a boycott of some Singaporean F&B brands, such as Tiger Beer and Ya Kun Kaya Toast, reason being “Singapore is not supporting the voices of Myanmar people”.

Earlier on, it was reported that de facto leader and Nobel Laureate Aung San Suu Kyi, along with President Win Myint and other senior politicians, were detained by the military junta on 1 February due to the alleged fraud in the election held in November last year.

A state of emergency has been declared in Myanmar, while thousands of people have rallied to protest against the military takeover.

Protesters have also urged people to boycott businesses that are linked to the military.

Just recently, graphics calling for a boycott of brands from Singapore have been circulating on social media platforms.

Tiger Beer, BreadTalk, Ya Kun Kaya Toast, Beauty In The Pot, Crystal Jade Kitchen, and Ippudo were among the brands illustrated in the graphics, with the statements: “Singapore is not respecting the voices of Myanmar People, Singapore is supporting the Dictatorship”. 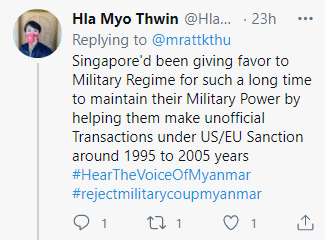 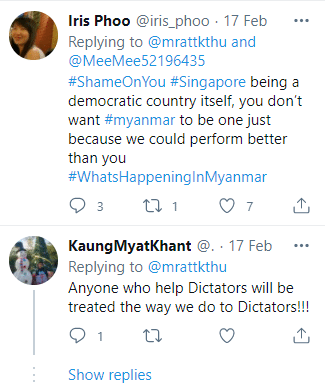 The graphics emerged after Foreign Affairs Minister Vivian Balakrishnan said in Parliament on Tuesday (16 Feb) that it would be “crucial” for Singapore to separate politics and business, and “let businesses make commercial decisions and investment decisions on their own merits”.

The Minister, who was responding to parliamentary questions from Members of Parliament (MPs) Christopher de Souza and Gerald Giam, believes that this would be “a good time” to maintain such discipline.

“So no, I will not give specific advice to companies, but I will make, to the maximum extent possible, all information available in this House and beyond, so that people can make their own commercial and investment decisions,” he noted.

Dr Balakrishnan also acknowledged that Singapore is the largest investor in Myanmar and revealed that the country’s cumulative approved investments were at US$24.1 billion as of December last year.

However, he claimed that the major proportion of the investments have occurred in the last five years under the National League for Democracy (NLD) government.

“I want to stress that companies made these investment decisions on commercial grounds.

“They did not do so because of political influence, or political suggestion on our part. But I believe that the commercial companies saw promising opportunities in Myanmar that was undergoing democratic transition,” he added.

Apparently, Singapore’s investment in Myanmar involved 305 firms in total, according to Dr Oh Su-Ann’s report in 2019 – a visiting fellow at the ISEAS-Yusof Ishak Institute.

The Global New Light of Myanmar reported last October that about 20 Singapore-listed enterprises brought in US$1.85 billion into Myanmar in the past financial year 2019-2020, making it the top source of foreign investment in the country.

In fact, several Singapore-run businesses were also linked to the military in Myanmar.

“I have submitted a police report because the Singapore government has been known to prosecute people based on that.

“There is a Singaporean listed as a director for STE Global Trading, together with Tun Hlaing, director of the Myanmar Directorate for Defence Industries,” said the blogger in her Facebook post.

She also included a copy of the police report and two supporting documents in the post.

One of the documents was to prove the directorship – which was obtained from Singapore’s Accounting & Corporate Regulatory Authority – and another was an excerpt from the United Nations Security Council report linking Tun Hlaing with the two companies.

Ms Swe had also compiled a list of Singapore-run businesses which are linked to the military in her blog post on 9 February.

Separately, Razer’s co-founder and director Lim Kaling decided to sell his one-third stake in a joint venture that owns RMH Singapore – which in turn owns 49 per cent of Myanmar’s cigarette maker Virginia Tobacco Company (VCTL) – after a petition was launched calling for his removal from Razer’s board unless he cut ties with the military.

Another 51 per cent of VCTL is owned by the military-linked Myanmar Economic Holdings Public Company (MEHL).

ST Engineering stated in a press release that it will jointly operate a security operations centre in Yangon with AUT.

It has also been suggested that anti-drone guns that the Myanmar military government is using, comes from TRD, a Singapore-based company which also has an office in Myanmar.

Who's arming the Myanmar police? This anti-drone gun is from TRD #Singapore. According to data on Linkedin, TRD has an office in Singapore + #Myanmar. Biz like TRD are empowering the Myanmar military regime's repression of the #CivilDisobedienceMovement. #HearTheVoiceOfMyanmar pic.twitter.com/DJvLvqckoj

It was also reported that protesters had gathered outside the Singapore embassy in Yangon on 13 February to call for the country to stop all bank transactions with the military government.

They also called on Singapore-based mainstream media news outlet CNA to amplify the voices of protesters.

Myanmar-based media Mizzima uploaded a live video on its Facebook page, which showed a group of protesters holding placards and shouting outside the Embassy of the Republic of Singapore.

Singapore has earlier expressed its “grave concern” about the ongoing political situation in Myanmar.

“We are monitoring the situation closely and hope all parties involved will exercise restraint, maintain dialogue, and work towards a positive and peaceful outcome,” said Singapore’s representative at the UN Human Rights Council meeting on 12 Feb.

“Myanmar is a close friend of Singapore and a key member of ASEAN. We hope that the situation will return to normal as soon as possible,” she added, referring to the Association of South-East Asian Nations (ASEAN).

However, Singaporean human rights lawyer M Ravi said Singapore’s statement was “appalling” and “highly insensitive” to the people of Myanmar, as it was the police and other authorities who had used bullets and carried out arrests of peaceful protesters without any warrant.

“Some people have contacted me regarding this. I will say to our Myanmar friends that all right-thinking Singaporeans oppose the military takeover and people of Singapore condemn the serious violations of human rights and the ongoing atrocities committed by the military,” Mr Ravi assured.

In an earlier report, witnesses in Myanmar claimed that police fired rubber bullets at protesters after earlier blasting them with water cannon in Naypyidaw, the remote capital purpose-built by the previous military regime.

Edit: Transworld Group Singapore has been removed from Burma Campaign UK’s “Dirty List” as of 23 Feb 2021