Economists Manu Bhaskaran and Nigel Chiang published a paper on Academia.sg yesterday (20 Nov) highlighting that Singapore is under-performing relative to trading partners, peers and OECD countries in both labour and total factor productivity.

It reflects a “deep and systemic” issues in the Singapore economy, especially in sectors where an over-reliance on foreign migrant labour has affected incentives to invest. This is undermining economic growth, wages and living standards, corporate profitability and international competitiveness, the authors opined.

Manu Bhaskaran is an Adjunct Senior Research Fellow at the Institute of Policy Studies in NUS. He is also concurrently a partner and board member of Centennial Group, a policy advisory group based in Washington DC. Bhaskaran was formerly the Chief Economist for Asia at investment bank Societe Generale. Nigel Chiang is currently an economist also with the Centennial Group.

Singapore’s productivity growth has under-performed its top trading partners, other small high-income economies, and the OECD average, with the performance gap widening over the years.

“Since 2000, real median wage growth has declined, and average local monthly nominal wages are lower than in our peer group in every sector except finance — as much as 40 to 50 percent lower in construction, and accommodation and food services, where productivity is also very low,” the authors said.

“Low productivity growth will over time undermine economic competitiveness. Already the rate of return on foreign direct investment in Singapore is lower than in other emerging Asian economies and in a peer group of small countries with similar per capita GDP.”

“Without productivity growth, wages and living standards of Singaporeans cannot rise, and the economy will lose competitiveness over time,” the authors noted.

The authors said that the weak productivity in Singapore can be traced to policy decisions that may have distorted the incentive structure of the economy. “One likely reason is the massive inflow of foreign labour, much of it poorly skilled,” they wrote.

Up to around 2005, output per worker moved more or less in line with Singapore’s top 15 trading partners. But subsequently, there was a persistent and wide level of under-performance, coinciding with the explosive growth in the importation of cheap foreign labour in the early 2000s, noted the authors. 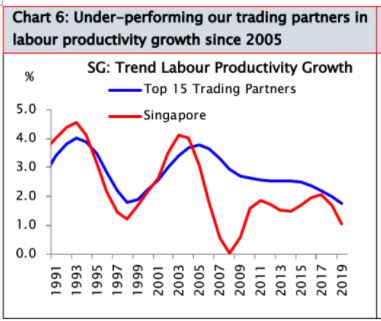 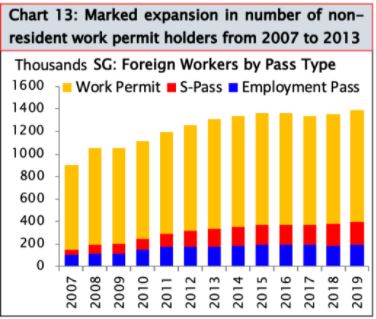 Indeed, by 2010, Singaporeans were already complaining about the huge influx of foreign workers moving into Singapore and PM Lee was forced to “moderate” the numbers down. At the National Day Rally in 2010, he acknowledged this, “We have moved quite fast over the last five years. We have accepted a larger inflow of foreign workers and we have taken in more new citizens and PRs. Conditions were good, we caught the wind, we moved forward.”

“Now I think we should consolidate, slow down the pace… we should give Singaporeans time to adjust and our society time to settle and integrate better the newer arrivals,” he added but said that Singapore must not close up. To please Singaporeans, he said subsidies would be adjusted to make a better distinction between Singaporeans and foreigners, including PRs.

When productivity growth under-performs, companies’ profitability is affected too. In their research, the authors found that construction, hotel, F&B and even information and communication sectors under-perform the most with respect to profitability, productivity and wages, and these sectors are the ones with large inflow of cheap foreign labour.

At the same time, the authors also observed that real median wage growth in Singapore has declined steeply in the first decade of the 2000s, which coincides with a period of accelerated inflows of foreign labour. 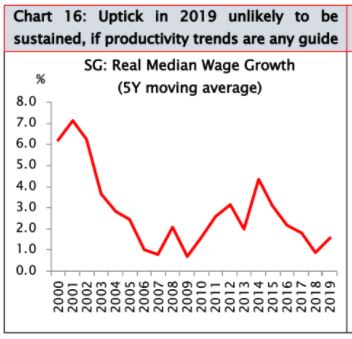 “The large and rapid inflow of foreign labour has depressed wages, business investment and productivity growth. Sub-par productivity growth eventually showed up in the under-performance of local companies, but the economy continued to grow thanks to an expanding labour force,” the authors wrote.

“To conclude, the Singapore economy appears to us to be in a low-level trap. Large inflows of low-skilled cheap foreign workers have depressed both wages and the incentive to raise productivity, making the economy increasingly reliant on ever more inflows of cheap labour, which further restrains wage growth and produces even less incentive to move up the productivity curve, while also hurting the wages of lower-income Singaporeans.”

“Our analysis suggests that deep and systemic issues are responsible for the under-performance of wages and productivity in Singapore.”

No new variants in weeks after China ended zero-COVID: study

No new variants in weeks after China ended zero-COVID: study

by The Online Citizen
20