The government has finally released the foreign workforce numbers for last year 2019. It shows that total foreign workforce in Singapore at the end of last year was 1,427,500.
In particular, the number of foreign professionals, managers, executives and technicians (PMET) has slowly crept up. At the end of last year, the number of foreign PMETs (Employment Pass and S Pass holders) hit almost 400K at 393,700. This was the largest increase at 3.3% since the last general election in 2015. 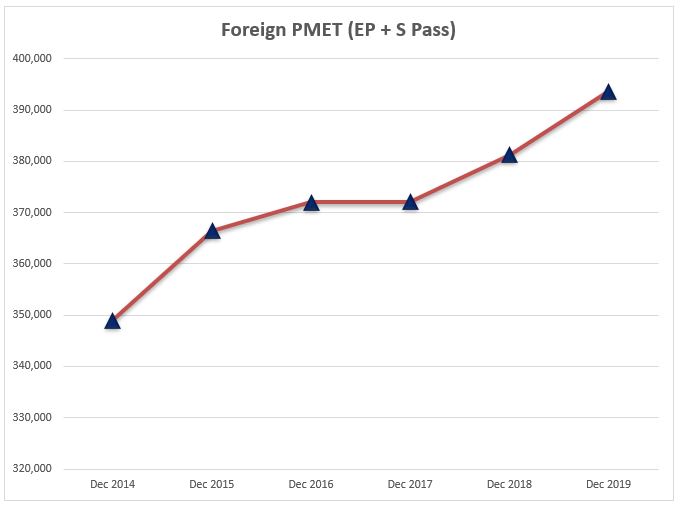 Not only the foreign PMET number is creeping up, the unemployment rate among Singaporeans is also going up. The overall unemployment rate (seasonally adjusted) in Singapore was 2.4% in the first three months of this year while that of citizens was 3.5%, the highest in the last 10 years. 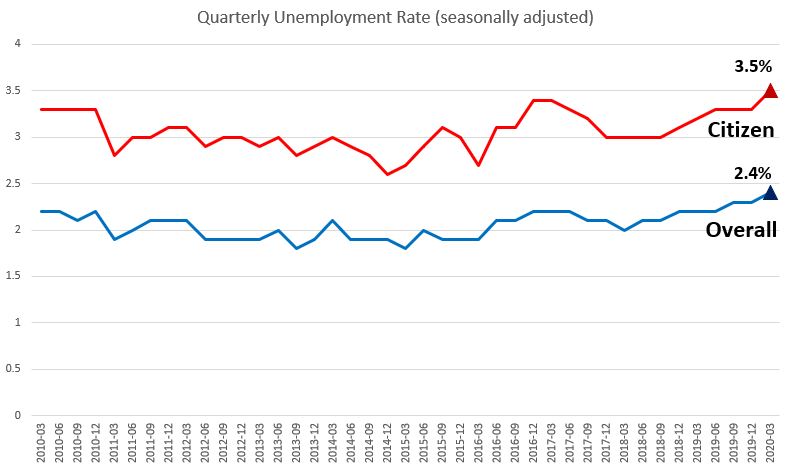 In a report released by Manpower Ministry (MOM) yesterday (29 Apr), it said that the labour market has felt the early effects of COVID-19.
In 1Q 2020, total employment excluding foreign domestic workers, registered its sharpest quarterly contraction since SARS, due to a significant contraction in foreign employment. Even though unemployment rates rose in March 2020, they remained lower than the peak during SARS, MOM said.
Retrenchments also rose in 1Q this year, but were about one-quarter that of the quarterly peak seen in the Global Financial Crisis, MOM added.
“In spite of difficulties since the start of the COVID-19 outbreak and seasonal influences, local employment still grew at a modest pace, as contractions in wholesale & retail trade, food & beverage services and accommodation were buffered by increases in healthcare, public administration and professional services,” it said.
“With jobs and wage support measures, and companies encouraged to retain workers and retrench only as a last resort, layoffs were generally held back.”
Back in 2018, Mrs Josephine Teo, who oversees the National Population and Talent Division (NPTD), at the Committee of Supply debate for the Prime Minister’s Office said that immigrants are needed to prevent the population from shrinking in the long term.
At current rates of immigration, Singapore is “close to achieving the same effect as if we had full-replacement Total Fertility Rate (TFR, of 2.1)”, she said. “Therefore, we do not expect any major changes to our immigration policy presently.”
“Therefore, we do not expect any major changes to our immigration policy presently. In other words, with a moderate level of immigration, we can prevent the citizen population from shrinking in the long term.” said Ms Teo.
She then added, “We have also taken in a steady number of Permanent Residents (PRs) each year, many of whom take up citizenship eventually. The PR population remains largely stable at around 530,000, with 31,849 PRs granted last year (2017).”
From fetching passengers to fetching food and groceries
Meanwhile, many unemployed Singaporeans especially the retrenched PMETs are turning to driving Grab in order to make a living, something HR experts and others have cautioned against.
Prof Walter Theseira, a Nominated MP and an economist at the Singapore University of Social Sciences (SUSS), is concerned about large number of PMETs driving Grab or taxi.
“The jobs offer no career path and do not provide workers with significant marketable skills. This means that workers in such jobs will inevitably end up disadvantaged compared to their peers who are able to stay in jobs that offer a career path and the opportunity to build marketable skills,” he said.
That is to say, PMETs who switched to driving Grab or taxi would have an even harder time getting a job in the market later because it would not help to build up their resume.
But with the COVID-19 outbreak, cabbies and private-hire car drivers have been hard hit. Many are turning to delivering food and groceries instead with their vehicle (‘Cabbies, private-hire car drivers turn to food and grocery deliveries‘, 18 Apr).
Grab, the largest private-hire operator in Singapore, said “thousands” of drivers have signed up to offer food delivery services. Many told the media that it is “better than nothing”. They were relieved to have an extra option to help cover costs.
Grab driver Don Ong, 24, said, “I can complete up to 17 deliveries in a day, earning about $120. It’s three to four times more than what we can earn now from the normal ride-hailing jobs.”
But the drivers hope that the COVID-19 situation will ease up soon so they can return to ferrying passengers, instead of food and groceries.