The Singapore government has removed the “Virus Vanguard” mascot from its website just a day after the characters were announced as an awareness campaign to spread the word about the country’s “circuit breaker” measures and good hygiene habits.
Modelled as superheroes, the Virus Vanguard mascot consists of five characters including Circuit Breaker, Fake News Buster, MAWA man, Dr Disinfector and Care-leh Dee. These characters were meant to remind people to stay at home, observe safe distancing, practice good hygiene, take care of mental health and debunk fake news.
However, soon after revealing these mascots, the government received blow back from the public which prompted them to take down the mascots altogether.
On the removal, Gov.sg on its Facebook page on Monday (20 April) that these mascots are currently “undergoing a review” after receiving a lot of feedback.
“We are sorry if we offended anyone.” wrote Gov.sg.
It added, “As this is the first time we are exploring this content format, we appreciate your patience.”
Gov.sg also shared that the creation of the mascots was a collaboration with the Band of Doodlers (BOD) to create a comic series to convey different aspects of the Circuit Breaker measures.
BOD, on the other hand, come forth to claim responsibility as being the producers of the original artwork which eventually became the Virus Vanguard. They had posted a sample of the original team of COVID heroes on their Facebook about two weeks ago.
The team said it designed “Covid Warriors” to be a full force of heroes to fight against “King Corona” as part of effort in showing support to the “true heroes” – frontliners.
However, the art-style and character design by BOD on its original post is clearly very different from the finalised version of the characters featured by Gov.sg.
Commenting on the Facebook post of Gov.sg, many netizens condemned the government for shifting blame over the flop of the Virus Vanguard to BOD after it received public backlash. They were discontented that the government did not credit BOD during the initial launch of the mascot but then use the artists as “shield” only after something went wrong.

Under the post, one netizen, Mas Shafreen who is also the founder of BOD, apologised and clarified the misunderstanding.
One of the controversies surrounding the characters was over a character called called MAWA man whose character history was based on the well-known rivalry between two major English football clubs, Liverpool and Manchester United. This did not go down well with the public. In his comment, Mr Mas explained that MAWA man was meant to show people that it takes everyone pulling together to get through these difficult times.
He also expressed appreciation for being given the opportunity to work on the project and hoped that local artists will continue to be supported. Some netizens commented that instead of creating such a campaign, the government should allocate its resources to solve the plight of migrant workers and the ensure the welfare of frontliners who are the “true superheroes” amid the COVID-19 pandemic.

One netizen asked the government not to take this global crisis lightly by launching a “self serving campaign” which was not well thought out or executed.

On the other hand, some netizens appreciated the attempt by the government and BOD to spread some positivity during this hard time. 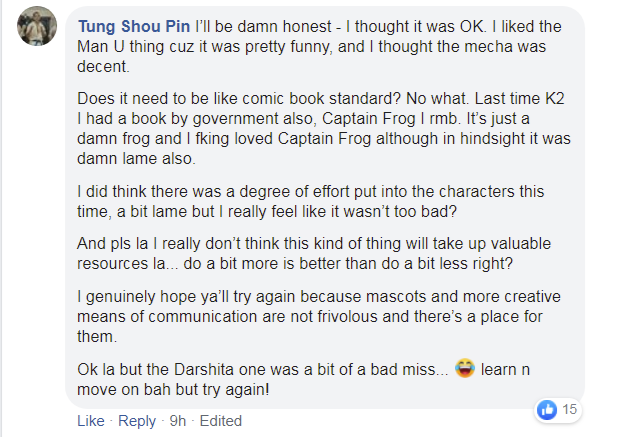 A few netizens suggested that it would be more appropriate and convincing if the artwork of superheroes were drawn based on actual life heroes, such as frontliners and essential workers, while delivering the same message to people.