It was reported that as of Wed (8 Apr), active COVID-19 clusters have been found at 9 different foreign worker dormitories in Singapore:

Of the 9 dormitories, S11 Dormitory @ Punggol, Westlite Toh Guan, Toh Guan dormitory and Sungei Tengah Lodge have been gazetted by the government as isolation areas under the Infectious Diseases Act to prevent the spread of the coronavirus. Cases in these 4 sites were found to be growing rapidly prompting the move by the government.
The S11 site currently has the largest COVID-19 cluster in Singapore with a total of 287 confirmed cases as of yesterday (9 Apr). In the case of Westlite Toh Guan, it had a total of 49 confirmed cases.
The number of cases in the other sites have also been seen increasing. In particular, as of yesterday (9 Apr), the Ministry of Heialth reported that Cochrane Lodge I (51 Admiralty Road West) had 9 cases, Cochrane Lodge II (49 Admiralty Road West) had 6 and Kranji Lodge (12 Kranji Road) had 7. In total, these 3 sites had 22 COVID-19 cases confirmed.
Foreign worker dormitory business linked to PA grassroots leaders
As it turns out, a number of foreign worker dormitories are actually run by companies linked to grassroots leaders of People’s Association (PA).
For example, Westlite Toh Guan is run by public listed company Centurion Corporation Ltd:

And Centurion Corporation has 2 “joint” chair persons sitting on its board: Joint Chairman David Loh Kim Kang and Joint Chairman Han Seng Juan. Not surprisingly, these 2 are grassroots leaders themselves.
Loh was awarded a PBM in 2011 and a BBM in 2016. He helps out Potong Pasir SMC under MP Sitoh Yih Pin. 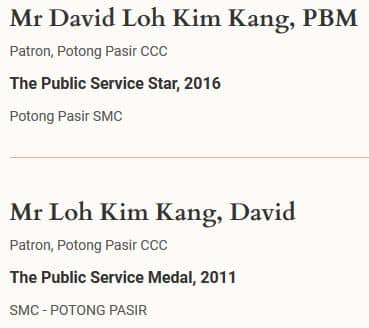 Han got his PBM in 2010 and BBM in 2015. He also helps out in Potong Pasir SMC. In the general election of 2011, PAP managed to wrestle back Potong Pasir SMC from opposition. 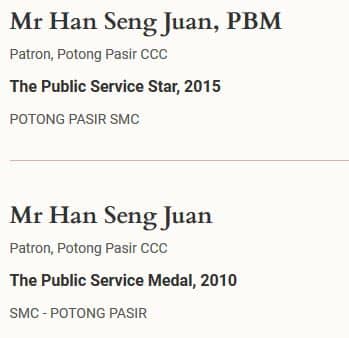 Another grassroots leader who sits on the board of Centurion Corporation is Chandra Mohan S/O Rethnam. He was awarded PBM and BBM in recognition of his contribution towards community services in Singapore.

Chandra has been a partner of law firm Rajah & Tann Singapore LLP for more than 20 years. According to the law firm’s website, Chandra is recognised as “one of the best lawyers in Singapore in the areas of litigation and trust & estates by his peers in the 11th Edition of The Best Lawyers in Singapore”.
And alongside his active practice, he has been appointed as one of the Chairmen of the Citizenship Committee of Inquiry by the government since Jun 2018 and Chairman of the SkillsFuture Standing Committee since Sep 2017. The website also added, “He remains very active as a Council Member in the Northwest Community Development Council (NWCDC).”
3 of 9 dormitories with active COVID-19 clusters linked to grassroots leader of Nee Soon GRC
Further online checks also reveal that 3 of the 9 foreign worker dormitory sites mentioned above with active COVID-19 clusters – Cochrane Lodge I, Cochrane Lodge II and Kranji Lodge – are run by a single company called Vobis Enterprise Pte Ltd linked to PA grassroots leader Ken Lim Yew Ming.
According to the website of Vobis Enterprise, it said that Vobis Enterprise is a wholly-owned subsidiary of Aik Chuan Construction Pte Ltd “dedicated to provide high-quality accommodation for foreign workers”. The website also said, “Vobis dormitory is the only Resort-styled dormitory in Singapore.”

Aik Chuan Construction Pte Ltd, the parent company of Vobis Enterprise, has been run by Ken Lim Yew Ming since 2005:

The company was said to have started off as a small general subcontractor by his family in 1982. Its website said Lim has “good foresight & excellent strategically future expansion plans” to run Aik Chuan Construction.
Lim is also a PBM holder but yet to get his BBM. He was awarded the Public Service Medal in 2015 for his grassroots work in Nee Soon GRC. He is the Patron of Canberra Citizens’ Consultative Committee (CCC).

Now that more foreign workers are being infected with COVID-19 in the dormitories, it’s not known what these community grassroots leaders would do for them.