The Government made three serious missteps that placed the lives and health of Singaporeans in danger, said Singapore Democratic Chief (SDP) chief Dr Chee Soon Juan on 6 April as he urged Singaporeans to exercise independent thinking and not to follow everything that was told by the Government.
In a Facebook video on Monday, Dr Chee called out Prime Minister Lee Hsien Loong for instructing people on Facebook on 30 January not to wear masks if they are well. He noted that it was the first misstep that led to the second wave of COVID-19 infections in Singapore.
“Ministers repeated the instructions over and over. For a time, the Straits Times attached it daily on its front cover. When we collected the masks that were being distributed, we were told the same thing: Do not wear a mask if you are well,” he explained.
“It wasn’t even an advice, it came across as if they were strict orders,” Dr Chee remarked.
Referring to when PM Lee clarified the guidelines were taken from the World Health Organization (WHO), Dr Chee questioned the reason behind the prime minister not listening to the local doctors who have called people to wear masks.
He explained that on 10 February, four local medical practitioners signed an advisory and released a memo, advising people to always wear a mask when leaving their home. The memo wrote, “If one faces a person and both parties are masked, it is considerably safer, constituting a two barrier protection.”
The second misstep was when the prime minister encouraged Singaporeans to go out when the advice should have been to stay at home.
“He told Singaporeans to go about our lives as normally as possible. Based on these two pieces of terrible advice Singaporeans started to go out again to crowded places – all without wearing masks,” Dr Chee noted.
While the third misstep was when the Government allowed Malaysian workers to come into Singapore to work when the Malaysian Government itself had imposed a lockdown and closed its borders.
He relayed the Case 853 of COVID-19 in Singapore involving a 20-year-old Malaysian worker who was still in Malaysia on 16 and 17 March but beat the deadline on 18 March to make it across to Singapore. The worker was confirmed to be infected with the virus on 29 March.
“We let these Malaysian workers in because we were afraid that if we didn’t, our workplaces would have to close and our economy would suffer. So we let them in, they spread the virus and now we have to close workplaces anyway,” said Dr Chee.
He added, “Now we have a double whammy: more infections and our economy is going to suffer because of the lockdown. Wouldn’t it be more sensible if we had just stopped the Malaysian workers from coming in in the first place?”
Following the Government’s three missteps, Dr Chee stated that the number of cases started to increase in mid-March and hit a record high of 54 local cases on 1 April.
Noting that it is understandable if the Government makes mistakes because “no one can get everything exactly right”, Dr Chee asserted that a responsible opposition should speak up especially when things go wrong.
“If things start to go wrong, as they clearly are now, and with the PAP opportunistically trying to play politics by calling for the GE amidst the pandemic, or dispenses wrong guidelines like calling on people to go out and not wear masks, then it would be irresponsible if the opposition did not speak up,” he explained.
On that note, Dr Chee stressed that a responsible opposition adds value to a political system that is crucial to the country because the ministers are not always right.
“For too long, the PAP has been spreading propaganda that the opposition is bad and out to ruin Singapore. We’ve had to live for that label for far too long,” he noted. “These three episodes demonstrate clearly, unambiguously that the PAP’s decisions are not always right and as a result, have placed the lives and health of Singaporeans in danger.”
Lastly, Dr Chee urged the people to exercise critical and independent thinking and not to follow everything that was told by the Government.
“Don’t abandon your mental faculty and let the PAP do your thinking for you,” he remarked. “Think critically and independently, I beg of you. Your well-being and that of your loved ones depend on it.”
https://web.facebook.com/cheesoonjuan/videos/3135249036499383/

Dr Chee’s video has gained a lot of attention from local netizens as it garnered 148k views, 2.4k likes, and 1.8k shares since it was posted on 6 April.
Many netizens agreed with Dr Chee’s points of view and praised his critical evidence on the Government’s missteps in dealing with the COVID-19 crisis. 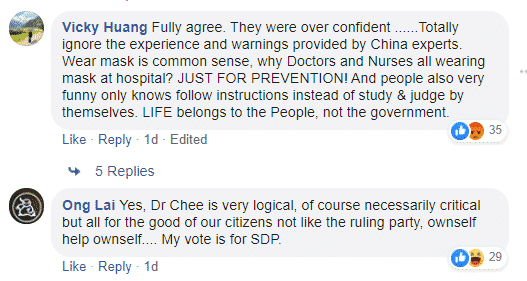 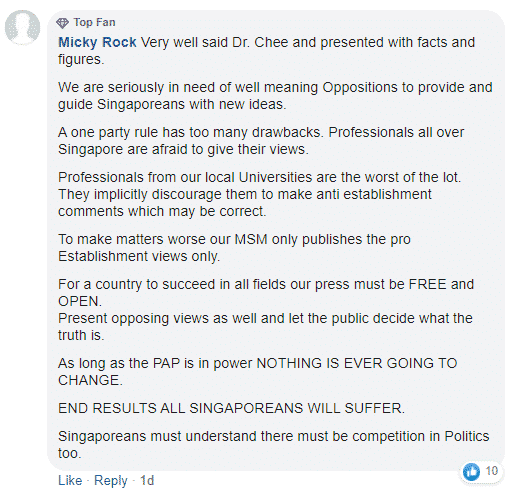 There are netizens who were quick to point out the other mistakes made by the Government. Some netizens pointed out that the Government should make it compulsory to wear masks.

One netizen said the Government was slow to act when the virus has spread among the foreign workers living in the dormitories.

Another netizen voiced disappointment as the Government seems to focus more on having the next election instead of fighting the COVID-19 crisis.

One netizen agreed with Dr Chee’s explanation and noted that the Government should have imposed ‘lockdown’ earlier.

Meanwhile, some netizen slammed the Government for putting the blame on WHO.