In view of the growing numbers of COVID-19 infections in the country, Ministry of Manpower (MOM) will imposed stringent measures including gazetting Westlite Toh Guan dormitory and S11 Dormitory @ Punggol as isolated areas while implementing further safe distancing measures at all workers’ dormitories to curb the spread of virus transmission, said Manpower Minister Josephine Teo on her Facebook on Sunday (5 April).
In her Facebook post, Ms Teo said that those workers who stay at isolated dormitories will be quarantined for 14 days and are not allowed to go to work.
“They would have to remain in their existing rooms. They have also been briefed to avoid mingling and interaction with workers in other rooms,” she wrote in her post.
Considering about the well-being of essential service workers, Ms Teo said that MOM will convert more spaces to house the workers in essential services which will be moved out from the isolated dormitories, though the number of essential services workers staying in those dormitories is “relatively small”.
While within the dorms, MOM will limit the interactions of workers, from between block to between floors and “thin out” the number of people in the dorms in order to reduce the risk of COVID-19 transmission within the dormitories.
As for the workers who are not tested positive for COVID-19 but are unwell, they will be “relocated” to isolated sick bays, says Ms Teo.
On top of this, Ms Teo also mentioned that MOM will work with the employers to ensure that the foreign workers who are under quarantine will continue to be paid, while hospitalisation leave will also be covered for as part of the workers’ statutory leave eligibility during the isolation period.
MOM will also provide three meals a day as well as necessities such as masks, thermometers, and hand sanitisers for the affected workers while the onsite medical support has been deployed to support those workers who are unwell during this period.
Noting that MOM is aware of the importance of making remittances for foreign workers, Ms Teo said that it will facilitate remittance on site for the workers.
Not only Singaporeans, Ms Teo said that the main purpose of all these measures is also to ensure the health and well being of foreign workers and their employers.
“They are also a part of the essential workforce which we would need when business activities restart. We want to give foreign worker the assurance that these measures are taken in their interests, and their well being,” Ms Teo added.

Given the fears of spreading of coronavirus, MOM previously issued an advisory to dormitories operators which closed all non-essential common facilities, prevent intermingling between blocks, stepped up safe distancing at the dormitories including, and staggering meal hours and recreation time.
The move of gazetting the two foreign workers’ dormitories is considered a heightened effort by MOM to curb further transmission as more COVID-19 cases are popping up from these two foreign workers’ dormitories.
The Ministry of Health (MOH) on Monday (6 April) has confirmed 120 new cases of COVID-19, with 22 cases are linked to S11 Dormitory @ Punggol, bringing a total of 63 confirmed cases while another 10 cases are linked to Westlite Toh Guan dormitory, bringing a total of 28 confirmed cases.
Last Friday (3 April), Prime Minister Lee Hsien Loong also announced a few tighter measures including closing all workplaces except those of essential services and key sectors and implementing full home-based learning. These measures will commence as of Tuesday (7 April) to cope with the evolving situation of COVID-19 in the country.

Many netizens who commented under the post of Ms Teo, said that the measures taken by the government “lack of foresight” seeing how the government only takes precautions after everything has happened. Citing the issue of mask usage and government relief package, netizens criticised that the government could not foresee the conditions but just taking “reactive actions” instead of “preemptive actions”. Some netizens pointed out that the condition of foreign workers’ dormitories is not as good as shown in the photos.
In fact, the workers are living in a really “congested” and confined place. Netizens then suggested the Minister to visit the ground to have a real look at their actual living conditions.

One netizen, who is believed to be one of the workers staying in one of the dormitories, shared just how overcrowded the place is. “We are here many people together sleep. 1 room 18, 16 person,” he said, adding that the hygiene of the toilets is also another concern, which could lead to people becoming infected.

At the same time, a few netizens doubted the effectiveness of isolation measures because if more people are confined within the same space, the chances of being transmission will be higher, which will subsequently increase the burden of medical resources.

Other than isolation, some netizens suggested the government to arrange “swab test” for the affected foreign workers as there might have some infected people who are “asymptomatic”, which may accelerate the spread of the virus. Contact tracing, social distancing, and asking officers who deployed at the dorms to wear protective gear also among the suggestions given by netizens. 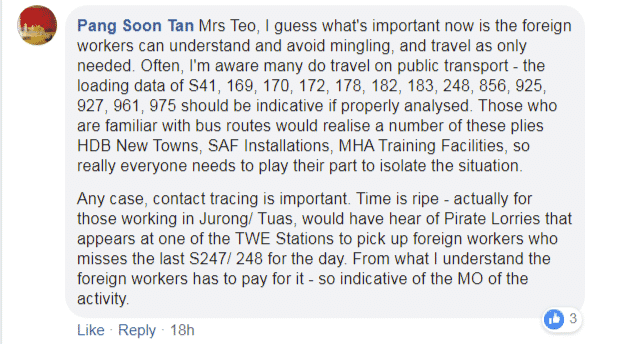 One netizen also raised concerns about the income of the workers being affected due to the isolation and absence of work. Hence, he hopes the government will offer help and support to the foreign workers.

5 Minutes with… Leong Sze Hian on the economy and jobs