“The way Singapore treats its foreign workers is not First World but Third World,” Prof Koh

Professor and international diplomat, Tommy Koh Thong, took to his Facebook page on Monday (6 April) to chastise the Singapore government over the unfair and “disgraceful” treatment towards the foreign workers after a COVID-19 infection cluster emerged among the migrant workers recently.
“The way Singapore treats its foreign workers is not First World but Third World,” said Prof Koh, who is also a professor of law and chairman of the Centre for International Law at the National University of Singapore.
Noting that the worker’s dormitories are a “time bomb waiting to be explode”, Prof Koh pointed out that 12 workers cramped in a dormitory room which is “packed likes sardines” and an unclean environment led to the emergence of a of COVID-19 cluster.
Prof Koh also noted his displeasure over how the Government allowed the employers to transport foreign workers in a flat bed trucks without any seats.
He added, “I feel angry when I see foreign workers sitting on the ground eating their lunch. I see exhausted foreign workers stretched out on the ground to rest.”
As the new COVID-19 cluster popped up in the foreign workers’ dormitories, Prof Koh urged the Government to treat it as a “wake up call” for the treatment given to the “indispensable foreign workers”.
He remarked, “Singapore should treat this as a wake up call to treat our indispensable foreign workers like a First World country should and not in the disgraceful way in which they are treated now.”

In his post, Prof Koh also shared a photo of a newspaper article, “Workers describe crowded, cramped living conditions” published in Straits Time earlier today.
The article from Straits Time noted that workers revealed the unsanitary and crowded living conditions they faced after the dormitories they were in – Westlite Toh Guan and S11 Dormitory @ Punggol – were designated as an isolation area due to the COVID-19 cluster.
It was reported that the workers are living in the places with bad hygiene, such as unsanitary kitchens with cockroaches crawling everywhere and toilets that are overflowing.

In view of the COVID-19 cluster in the foreign workers’ dormitories, S11 Dormitory @ Punggol, with 13,000 resident workers, and Westlite Toh Guan dormitory, with 6,800 resident workers, have been gazetted as isolation areas.
MOH states that this is necessary to avoid the risk of further transmissions from any potentially infected workers to others in the dormitories, as well as into the community. Workers who are symptomatic have already been isolated.
As the Government has locked down both dormitories, the movement of workers who stay there will be restricted and they are not allowed to leave their dormitories for the next 14 days while practising social distancing as an enhanced measure to curb the spread of virus transmission.
National Development Minister Lawrence Wong said to media that there are now two separate strategies for tackling the spread of local cases. One for dormitories and one for the wider community.
“Once the circuit breaker (measures) kicks in, all foreign workers, on top of (those in) isolation areas, will have to stay in dormitories and will not be able to come out, so there is no infection to the rest of the community,” he said.
Here’s a video showing the isolation at S11 Dormitory @ Punggol:

Majority of netizens agreed with Prof Koh that the bad living conditions of foreign workers with such unsanitary environments and discrimination have to be seriously addressed. Some opined that it will not be useful to place them in quarantine as the workers do not have sufficient space or good sanitation.

Some netizens opined that the welfare of foreign workers should be everyone’s concern where the “responsibility does not falls on the Government alone”. One of them pointed out that dorm operators, contractors, and tenants should work closely to tackle the issue of hygiene at these living spaces as well as looking after the workers’ welfare. 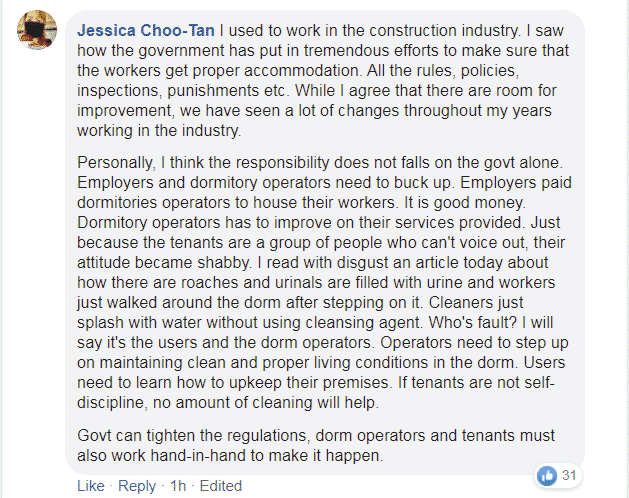 Apart from the lack of hygiene, a few netizens also condemned the Government for mishandling the issue of foreign workers, such as the long working hours. Some even wondered what the Government had done to tackle those issues which have been in the spotlight for some time already.