The Ministry of Health (MOH) announced that there were an additional 47 cases of COVID-19 infection in Singapore yesterday (31 Mar), of which 16 were imported and 31 were local cases who have no recent travel history abroad:

As of yesterday, the total number of confirmed COVID-19 cases in Singapore has exceeded 900 reaching 926.
Despite the many measures introduced by the government to address the spread of the disease, the number of locally transmitted unlinked cases has been rising since mid-March, according to the information gathered from MOH’s website.
These are cases which cannot be linked to existing infected cases immediately at the time of reporting. The number of daily new cases, including imported, locally linked and locally unlinked ones, is also seen to be rising rapidly.
Just yesterday, there were 18 unlinked cases reported out of the 47 new cases, exceeding the number of imported ones (16) as well as linked ones (13).

Experts in China and South Korea tell everyone to wear masks
Given that more unlinked cases are being detected daily, the government’s stand is for people not to wear masks if they are well, although they have somewhat omitted this message from their daily advertisement on the mainstream papers recently.

On the other hand, Oxford-trained George Gao, the director-general of the Chinese Center for Disease Control and Prevention (CDC), who recently gave an interview to Science magazine said that not wearing masks is a ‘big mistake’ (‘Not wearing masks to protect against coronavirus is a ‘big mistake,’ top Chinese scientist says‘, 27 Mar).
“The big mistake in the U.S. and Europe, in my opinion, is that people aren’t wearing masks,” Dr Gao said.
“This virus is transmitted by droplets and close contact. Droplets play a very important role — you’ve got to wear a mask, because when you speak, there are always droplets coming out of your mouth,” he added.
“Many people have asymptomatic or pre-symptomatic infections. If they are wearing face masks, it can prevent droplets that carry the virus from escaping and infecting others.” 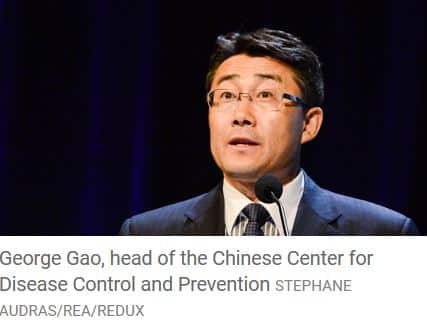 Another infectious disease expert Professor Kim Woo-joo at the Korea University Guro Hospital, who is also South Korea’s most prominent coronavirus expert, said in an interview on 24 Mar that wearing masks to prevent infection of COVID-19 is “definitely effective”.
“Why else would doctors wear masks in hospitals? They wear them because they prevent infection,” he added.
Prof Kim, who has around 30 years of experience in the area of infectious diseases, said he finds it quite “odd” that not many people wear masks in the West. “The US Surgeon-General said people didn’t need to wear masks, and WHO recommended people not to wear masks, but I’d have to disagree.”
“I did read his tweet … You have to understand the context. I think the point was to prevent the public from hoarding masks, because medical professionals need them more,” said Prof Kim, particularly due to the shortage of masks in the US.
Prof Kim criticised the WHO’s statement on how people are only encouraged to wear masks in Asian countries due to purported cultural differences, stating that such a view is “problematic” as masks have been “proven” to prevent infection.
“Just look at China, Hong Kong, Japan and Korea … In the meantime, if you look at many European countries and the US, the virus is spreading rapidly. One of the reasons Korea has a relatively low rate of infection is because everyone is wearing a mask and washing their hands regularly,” he said.
Airborne transmission
Prof Kim also cautioned that aerosol or airborne transmission of the virus is still possible. Citing the Shincheonji church gathering in late Feb — which led to a super cluster in the city of Daegu and an astronomical spike in cases in South Korea — Prof Kim explained, “Imagine these hundreds of people gathered within one to two metres of each other, praying and singing for hours … If one infected person is present, think about the number of droplets produced.”
“We all spit even when we talk normally. but if you are singing and shouting, you are going to get a lot of droplets. Gravity doesn’t pull all the spit down, which means the droplets don’t land within one to two metres … because the air can also flow sideways,” said Prof Kim, adding that the droplets can travel “much further” than the said distance.
The droplets shrink to less than 5 microns when they dry out, turning into an aerosol that allows them to travel as far as two metres, he said. “That’s how a person standing quite a few feet away can still get infected.” But he also said that airborne transmission in open spaces such as parks would be unlikely.