President Halimah Yacob said she agrees with the rates to be used in deriving the amount of the country’s past reserves that can be utilized under the Net Investment Returns Framework.

This was posted on her Facebook yesterday (18 February), where she noted that Deputy Prime Minister and Finance Minister, Heng Swee Keat had informed her and the Council of Presidential Advisers (CPA) two months ago pertaining to the government’s proposed expected long-term real returns on its assets. 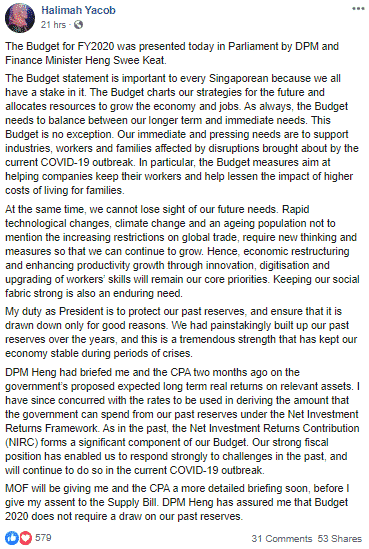 She added that DPM Heng has assured her that Budget 2020 does not require a draw on past reserves.

“Our strong fiscal position has enabled us to respond strongly to challenges in the past, and will continue to do so in the current COVID-19 outbreak,” she stated.

In regards to this, DPM Heng said during his Budget speech that the Singapore Government has sufficient accumulated fiscal surplus to fund the overall deficit this year, thus will not be drawing on past reserves.

The government is expecting an overall budget deficit of S$1.7 billion or 0.3 percent of Singapore’s gross domestic product (GDP) for FY2019.

“MOF will be giving me and the CPA a more detailed briefing soon, before I give my assent to the Supply Bill,” President Halimah stated in her post.

The Net Investment Returns framework enabled the Government to take up to 50 per cent of the expected long-term real returns on net assets invested by GIC, the Monetary Authority of Singapore and Temasek into the Budget, after deducting liabilities, The Straits Times reported.

The President also remarked her duty to protect the past reserves and ensure that it is drawn only for good purposes.

“We had painstakingly built up our past reserves over the years, and this is a tremendous strength that has kept our economy stable during periods of crises,” she said.

In addition, President Halimah noted that every Budget needs to be balanced between the nation’s longer-term and immediate needs.

She pointed out the nation’s immediate needs are to support industries, workers, and families affected by disruptions caused by the coronavirus outbreak.

“In particular, the Budget measures aim at helping companies keep their workers and help lessen the impact of higher costs of living for families,” she stated.

In terms of the nation’s future needs, the President said rapid technological changes, climate change, ‘ageing’ population and the increasing restrictions on global trade require innovations and measures for the country’s development.

“Economic restructuring and enhancing productivity growth through innovation, digitization, and upgrading of workers’ skills will remain our core priorities. Keeping our social fabric strong is also an enduring need,” the President added.

Corridor-reared bunny dies after severe neglect, AVA concludes it has been cared for since food has been given and cage cleaned