Traffic accidents involving elderly pedestrians have increased by 33.6% last year, which mainly caused by jaywalking, based on the Singapore Police Force’s annual road traffic statistics for 2019.

Singapore Police Force has released the Annual Road Traffic Situation 2019 on 10 February, which showed the number of traffic accidents involving elderly pedestrians has increased to 322 cases last year, compared to 241 cases in 2018.

Based on the statistics, 27 elderly pedestrians were killed in traffic accidents in 2019, and more than half of the fatal accidents were attributed to jaywalking.

Singapore Police Force in its Facebook post stated that elderly pedestrians are advised to refrain from jaywalking while motorists should keep a lookout for such vulnerable groups. 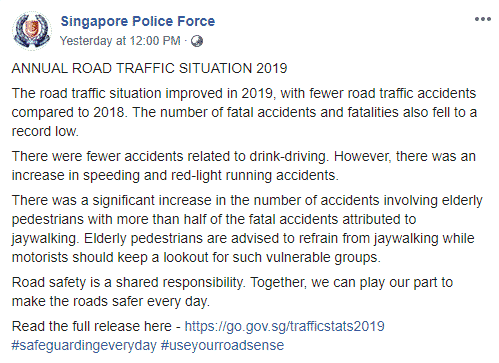 “Traffic Police (TP) will be working with Lion Befrienders Service Association and NTUC Health Co-operative Limited to engage volunteers to reach out to senior citizens and educate them on the dangers of jaywalking and how to stay safe on the roads,” Singapore Police Force stated in the full release.

Motorists are also prompted to look out for elderly pedestrians and give way to them.

Following that, TP said they will continue to engage with motorcyclists through regular engagement events to educate them on the importance of safe riding practices, such as the annual Singapore Ride Safe campaign.

All Class 2, 2A, 2B, 3 or 3A learner motorists are required to undergo the training before getting their Practical Driving or Riding Tests. This is to inculcate good and safe driving and riding habits among them.