Will continue to speak up for keeping cats in HDB flats, MP Louis Ng

HDB's pet ownership policies have to strike a balance between residents who are pet lovers and those who are not, says Minister Lawrence Wong

Louis Ng Kok Kwang, the Member of Parliament (MP) for Nee Soon Group Representation Constituency (GRC) has affirmed his stance against the ban of Housing and Development Board (HDB) on flat owners keeping cats.

Mr Ng wrote on his Facebook on Tuesday (7 Jan), “Looks like it’s still a “NO” to keeping cats in HDB flats but rest assured that I will continue to speak up about this. What do you think? YES or NO to cats in HDB flats?”

Mr Ng, who is also the Chief Executive of Animal Concerns Research and Education Society (ACRES) was responding to the answer provided by Minister for National Development, Lawrence Wong relating to the issue of keeping cats in HDB flats.

He questioned Mr Wong in Parliament on Monday (6 Jan) for the reason of banning cats being reared in HDB flats, and whether the ministry is reviewing the rule.

In response to Mr Ng’s questions, Mr Wong said that, “HDB’s pet ownership policies have to strike a balance between residents who are pet lovers and those who are not.”

Mr Wong mentioned that irresponsible pet ownership can lead to disamenities in the community and cause unhappiness.

“In the case of cats, disamenities include shedding fur, defecating and urinating in public areas, and caterwauling by roaming cats,” he said.

Notwithstanding these concerns, Mr Wong noted that the HDB recognises that there are many residents who are cat lovers and who would like to keep cats in their flats.

Hence, the Minister stated that HDB will continue to review and update its pet ownership policies, together with National Park Boards and Animal & Veterinary Service which is responsible for the broader issue of animal welfare and licensing.

“While we would like very much to accommodate the wishes of all pet owners, we also have to take into consideration the views of other home-owners, and take a holistic and balanced approach in addressing this issue.” he added.

However, Mr Ng maintain his view that it is time to review the rule and he has spoken up on this issue for many years.

Most of the netizens who commented under Mr Ng’s post were supportive and appreciative to his effort for voicing out this issue. Meanwhile, there were a few who expressed their disappointment on how the policies of HDB are only applied to cats despite both dogs and cats being considered as pets.

As stated in HDB official website, “Cats are not allowed in flats. They are generally difficult to contain within the flat.” Flat owners are allowed to keep one dog of the approved breeds at home.

Some HDB residents also questioned whether they are truly flat owners because they are restricted by the rules of HDB and more akin to the status of a tenant which many say is the true status of a HDB flat dweller. 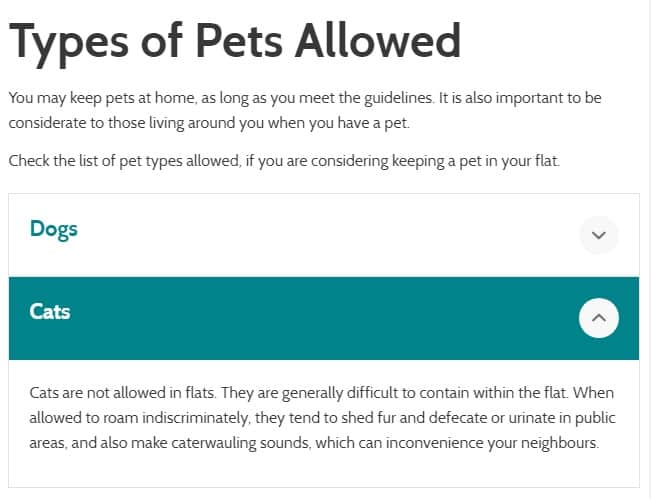 Was Cost of Living an election issue in the 2020 Singapore General Election?