BPLRT comes to a jolt during morning rush hour

Passengers aboard the Bukit Panjang LRT (BPLRT) got a jolt during the morning rush hour on Monday (6 Jan) as the train they were traveling in came to a sudden halt. There has been speculation that the breakdown was a result of a power fault.

The Singapore Civil Defense Force (SCDF) was there in the nick of time to help. However, the quick action emergency sequences were already set in place and passengers were safely transferred to another LRT train by then.  Following this, the train set forth to the Fajar station.

This is not the first time that BPLRT has faced such malfunctions. Being used to its recurring malfunctions, many passengers dismissed the BPLRT services due to its unreliability.

According to Chief Spokesperson for SMRT Corporation, Ms Margaret Teo, SMRT had immediately dispatched their engineers to the site to oversee, inspect and restore services. She added that the SMRT had made regular announcements to inform commuters of the situation.

Subsequently, the malfunctioning train was withdrawn and sent to the depot for inspection.

Ms Margaret apologised on behalf of the SMRT Corporation and expressed regret over the disruption of services and the inconveniences thus caused.

During the breakdown, both twitter platforms for the MRTWatch and the SGCommComm had tweeted regarding a 15-minute delay in Services A and B.

Ms Mary Lee was one of the first to share a picture on Facebook which shows the train stranded enroute Bangkit  to the Fajar station. Several SCDF personnel were present at the site of the incident. 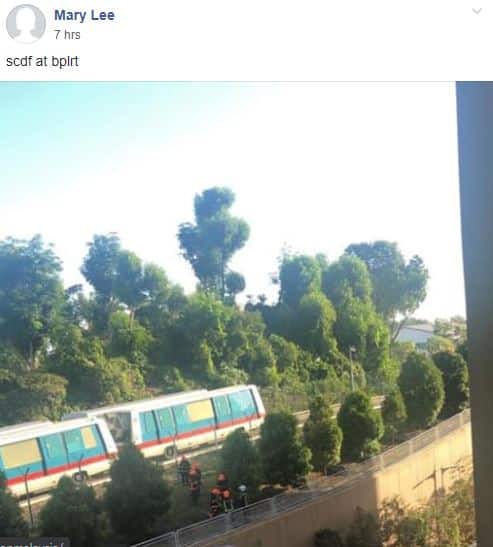 Apart from SMRT announcements, passengers themselves have taken to social media to inform their friends and colleagues along with other commuters of the breakdown.

One such person, an administrator of the TATA SMRT community group, Mr Paul Lee, did his part by relaying the message that the BPLRT was delayed on both Services A and B, and offered advice to commuters to make alternative transport arrangements.

Meanwhile, another responsible commuter by the name of Renfred Wong took to Facebook to inform others of the BPLRT 15-minute delay on Service B. 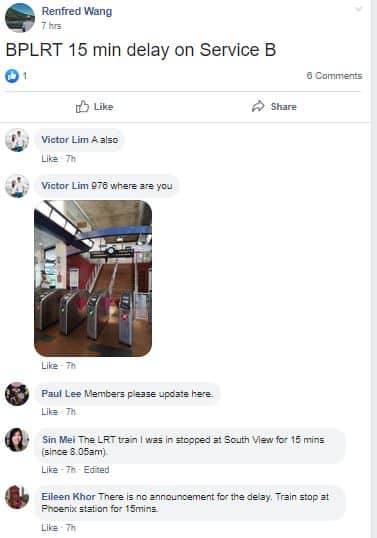 At the same time, users were also quick to penned their frustration across social media. One such example is commuter user Sherri Lim, who expressed her lost of confidence in using the train service. 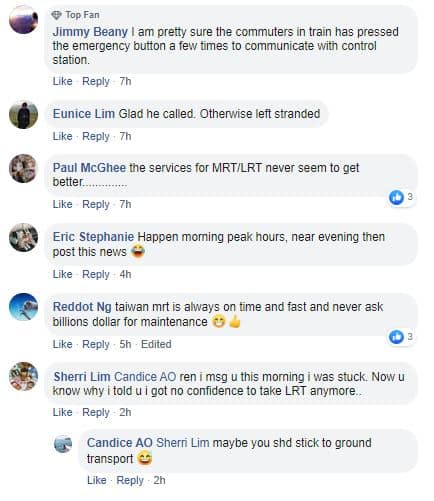 Others expressed dissatisfaction along with echoes of disappointment in regards to the newly increased fares only to receive poor service in return. 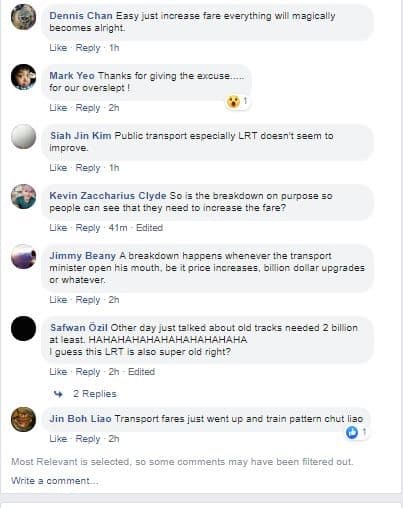