When are opinions simply opinions, and when are they falsified facts?

On 14 December, the Ministry of Manpower issued three correction directions (CD) under the Protection from Online Falsehoods and Manipulation Act (POFMA) to three online postings by the Singapore Democratic Party (SDP).
The posts – made on 2 December, 30 November, and 8 June – related to employment and retrenchment trend in Singapore which the MOM said contain misleading graphics and false statement of facts.
A statement containing the corrections ordered by MOM was published on the government website, Factually, in which the ministry claimed that the illustration depicted in the SDP post showing plunging employment trends of professionals, managers, experts and technicians is wrong.
MOM pointed to its Comprehensive Labour Force Survey which showed a steady rise of local PMETs employment since 2015.

Difference between fact and opinion

Now, if we look back at the Parliamentary debate over the passing of the POFMA bill in May 2019, Worker’s Party MP Sylvia Lim questioned Minister of Education Ong Ye King about statements made based on data which was later declared to be incomplete.
Ms Lim asked, “Mr Speaker, I have one clarification for Minister Ong Ye Kung. Earlier, in his speech, he referred to the case which I cited about the two economists 15 years ago. And according to his analysis, he mentioned that in order to qualify as an actionable POFMA untruth, there are two gates to pass. And his assessment was that in that scenario, gate one was not passed because there was no falsehood to begin with.”
She continued, “If I recall the facts of that case, the economists have relied on some data which later the Government said was incomplete and they had asserted based on the data that out of four jobs that was created, only one job went to a Singapore resident and three jobs went to the intake of foreigners.”
“So, I am wanting some clarifications because when you look at that statement alone about job creation, it appears on one reading to be an assertion of fact which later on, the Government came to correct and said it is not correct. In actual fact, out of 10 jobs, nine went to residents.”
“And one reading of POFMA, it could be argued that gate one has been passed because there is an assertion of some facts which are not correct. And gate two, possibly may be passed as well because this may diminish confidence in the Government in job creation.”
Ms Lim then asked for a clearer explanation on how POFMA would apply to researchers. She asked, “Does it mean that if researchers conclude facts based on incomplete data, that would not come under the POFMA even though factually, it has to be corrected?”
In response, Mr Ong said, “I got your point. I am prepared to explain this and have it recorded in the Hansard. Their conclusion that most of the jobs went to foreigners, that is the conclusion of the study. What they based that conclusion on, was on data, although incomplete, was not fabricated. It was not falsified. So, there was no falsification and no falsehood involved.”
He continued, “And as for the conclusion that most jobs went to foreigners – that was their conclusion and their opinion which is also not part of POFMA. So, so long as researchers abide by research discipline, I do not see how they can be caught by POFMA unless they fabricated data.”

Now looking back to the SDP case, MOM referenced its Comprehensive Labour Force Survey as an indication that there has been a steady rise of local PMETs employment since 2015. Although, we have to note that those figures include permanent residents other than local Singaporean.
Now, the MOM also took issue with SDP’s statement introducing its population policy which said: “The SDP’s proposal comes amidst a rising proportion of Singaporean PMETs getting retrenched”.
MOM claims that this statement is also wrong because there is no rising trend of local PMET retrenchments, again pointing to the labour force survey for evidence.
SDP had earlier clarified in a statement in response to the three correction orders that its statements on the trend of growing unemployment were based various public reports from mainstream media.
SDP noted that this particular statement was based a Straits Times (ST) report “PMETs make up rising share of retrenched locals” (15 March 2019).
The report wrote:

“Professionals, managers, executives and technicians (PMETs) made up about three in four or 76 per centof the locals – Singaporeans and permanent residents – who were retrenched last year, the highest figure in at least a decade. It rose from 72 per cent in 2017 and is significantly higher than the share of PMETs in the resident workforce, which is about 57 per cent.”

The report also includes a figure labelled: “PMETs make up growing share of locals laid off” with MOM stated as its source.
SDP noted that as ST is a government-controlled newspaper,  it had no reason to believe that it would publish fake news about the government and argued that MOM should take the matter up with the ST.
“If the ST states that its information, or the interpretation of it, is incorrect, we would be happy to amend our statement correspondingly.” wrote SDP.
SDP also pointed to a Yahoo! News dated 3 October 2019 where DBS senior economist Irvin Seah was quoted, saying: “PMETs continue to form a much larger share of retrenched workers compared to their proportion in the workforce.”
Additionally, the party also referred to a Business Insider report on 13 June (More workers were retrenched in Q1 – here’s why most of them were PMETs) which said, “Retrenchment in Q1 2019 is up from the previous quarter, and most of those who were retrenched were professionals, managers, executives and technicians (PMETs), a report by the Ministry of Manpower (MOM) has revealed.”
The party noted that other newspapers such as ST and TODAY also published similar reports.

Does the same standard apply to non-academics?

If we go by Mr Ong’s response in Parliament, the conclusions made are based on data which, though incomplete at the time, was not fabricated or falsified.
In SDP’s postings, the party wasn’t introducing new data at all but just presenting their interpretation of the data they had on hand based on media reports.
As you can see from the image below found on one of SDP’s post, the phrase used is “Coincidence? We think not.” The words “we think not” are an expression of opinion, which is not covered under POFMA. 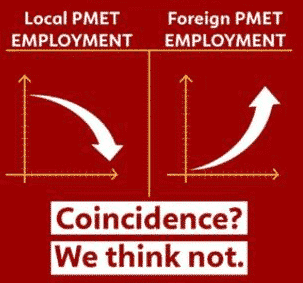 Mr Ong said, “So, so long as researchers abide by research discipline, I do not see how they can be caught by POFMA unless they fabricated data.”
So the question here is can the government say that Mr Ong could take that stance because the question in parliament was related to academics but in the case of SDP, the Minister of Manpower might not think the same way because individuals ministers can make their own call on whether to invoke POFMA.
If that’s the case, isn’t the law questionable as it gives unfettered power to individual ministers who exercise this power under different standards?

For just US$7.50 a month, sign up as a subscriber on The Online Citizen Asia (and enjoy ads-free experience on our site) to support our mission to transform TOC into an alternative mainstream press.
Tags: POFMA

Netizens question why POFMA directive was not issued to original source of ‘Singapore variant’ falsehood, but instead to social media platforms