Gilbert Goh is organising a gathering at Hong Lim Park on 3 November for Singaporeans to voice out against CECA, Ramesh, and 6.9 mil population plan

Gilbert Goh, founder of Transitioning.org and organiser of protests against the Population White Paper (PWP) and various other events such as Commemoration of May Day, is organising a gathering at Hong Lim Park this Sunday (3 Nov) from 4pm to 7pm.
The gathering will act as a platform for Singaporeans to pen their thoughts on any burning issues, especially on Singapore’s Comprehensive Economic Cooperation Agreement (CECA) and 6.9 million population plan, in light of the recent incident of Ramesh Erramalli – a foreign talent employee at J.P. Morgan who was caught on video berating security officers.

Announcing this news on his Facebook page on Wednesday (30 Oct), Mr Goh called for concerned Singaporeans to “flood the park with our united unhappiness at CECA, Ramesh and 6.9 mil population plan”.
“You can be unemployed, under-employed or simply dissatisfied with the current system. If you are a security officer, we want to hear from you as well,” he said in the post.
Those who are interested to attend may design their own placards to broadcast their messages. Not forgetting, the best placard design will win a prize.
Additionally, hot Milo will be provided for the elderly folks who are supporting the event on Sunday – as rain is forecasted. 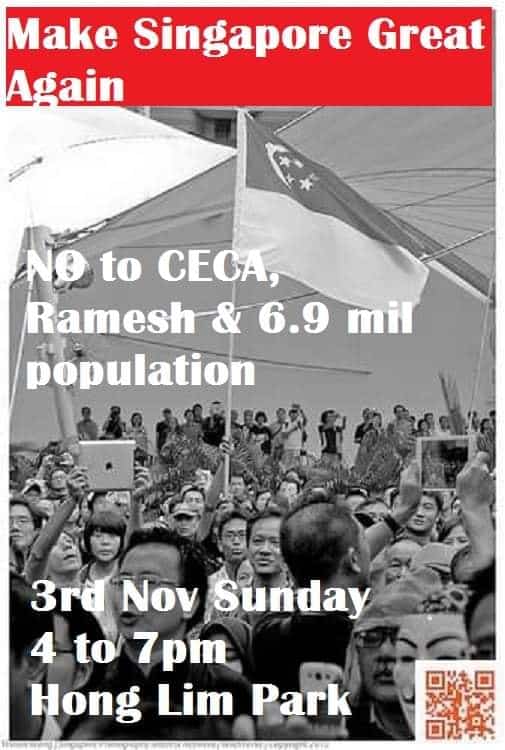 In a separate Facebook post on Thursday (31 Oct), Mr Goh noted that the event has “crossed the 500 mark on people going or interested”, before encouraging more people to join “to get a crowd of 1000”.
Meanwhile, in another Facebook post earlier today, Mr Goh said that former presidential candidate and Progress Singapore Party (PSP) secretary-general Dr Tan Cheng Bock has been invited to the event – given his recent comment, promising to call for a review of the CECA between Singapore and India.