An online petition at change.org titled ‘Get Ramesh Erramalli fired from JP Morgan Singapore’ was recently created, calling for Mr Ramesh Erramalli – a foreign talent from India who works at J.P. Morgan in Singapore – to be booted out from the company.
At the time of writing, the petition has just surpassed 26,000 signatures.

Online user Mickey KJ, who started the petition on behalf of Singaporeans, asserted that the petition “serves to remove disrespectful individual Ramesh Erramalli of JP Morgan out of Singapore following his horrendous attitude towards a security offer which went viral recently.”
The petition also note the following:

“We the citizens of Singapore want to see JP Morgan take a firm stance on the behaviour of its staff here and seek that Ramesh Erramalli be terminated from his position with immediate effect. We would also like to see his working privileges here in Singapore revoked by the Ministry of Manpower and Immigration and Checkpoints Authority and deported of out Singapore after. Individuals like Ramesh Erramallai are not welcomed to reside and make a living here in Singapore.”
“We Singaporeans take a firm stance in cases of ill-treatment of Singaporeans by foreign individuals. We stand united as one in defending our Singaporean brothers and sisters against foreign bullies like Ramesh Erramallai and ensure that such individuals face the consequences of their actions.”

Meanwhile, among the tens of thousands who gave their signatures, a handful of them left a comment, stating the reason behind their decision to sign this petition.
While most of the comments were scornful towards the “ugly and obnoxious” behaviour of Mr Ramesh as an expat living in Singapore, many also touched on the issue of companies in Singapore taking foreign talents into employment, highlighting that there are “more deserving Singaporeans with authentic and good credentials” who are “capable of doing his [Mr Ramesh] job”. 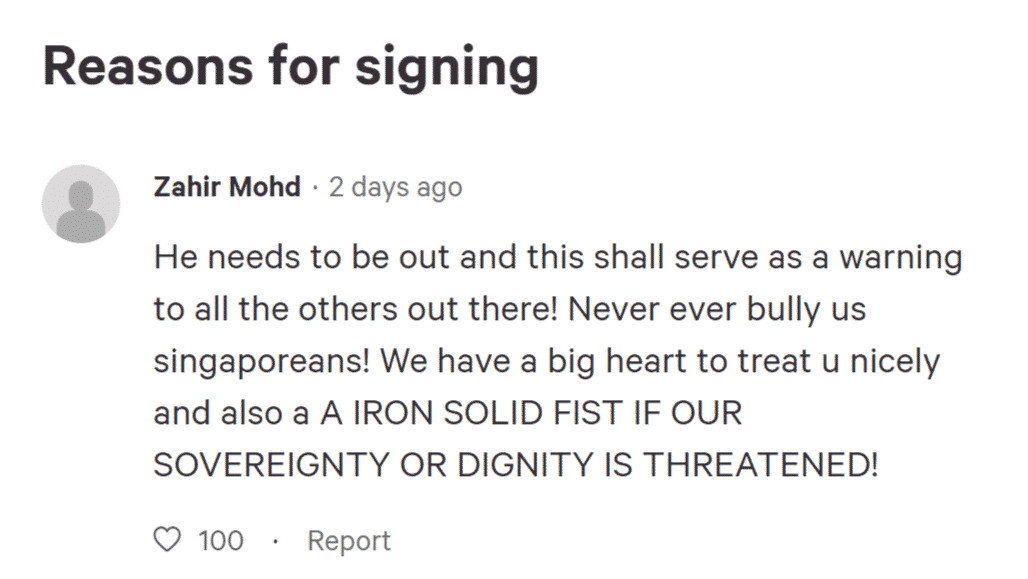 The petition came into being right after Mr Ramesh was caught on video yelling and hurling vulgarities at security guards after being told he needed to pay parking fees for guests visiting his condominium.
The footage of the incident – which reportedly took place at Eight Riversuites condominium in Bendemeer last Friday night (25 Oct) – was first posted on YouTube, and has been circulating across social media, making headlines.
In the video, a man dressed in a sleeveless shirt and shorts can be seen expressing his displeasure virulently towards the security guards.
The man, a resident at that place, told the security officers that he had bought his condominium unit for S$1.5 million, and subsequently started uttering profanities.
“I buy your f****** property for S$1.5 million you know,” exclaimed the man.
As the video progresses, the security guards were constantly explaining that they are just “enforcing the rules”, yet the man was adamant to his stance as he continued to berate them.
Once the video went viral, the ill-tempered man was identified as Mr Ramesh Erramalli, a foreign talent from India who works at global financial services company J.P. Morgan in Singapore.
According to The Straits Times (ST) on Sunday (27 Oct), two days after the incident transpired, J.P. Morgan stated that it is “aware of the video and is looking into the matter”.
But, the esteemed company declined to comment on whether it paid for Mr Ramesh’s alleged S$1.5 million accommodation and for how long he has been an employee.
J.P. Morgan issues internal email memo, reminding them to demonstrate the highest standards, including respect and dignity for others
However, as reported by ST on Tuesday (29 Oct), J.P. Morgan has issued an internal email memo to its employees, reminding them to demonstrate the highest standards, including respect and dignity for others.
The alleged internal email memo that was sent by Mr Edmund Lee, the senior officer of the multinational investment bank’s Singapore office, reminded its Singapore-based staff to uphold a “culture of respect” in their daily conduct.
Allegedly, Mr Lee wrote: “Our people, services and commitment to integrity have made J.P. Morgan one of the most respected financial institutions in the world. We all have a shared responsibility for preserving and building on this strong reputation…”All of us… are expected to demonstrate the highest standards, including respect and dignity for others… inside and outside of the workplace.”
It is said that there was no reference made to any incident. In particular, the heated exchange where its employee was caught on video berating the security officer.
When contacted by ST to confirm the e-mail, J.P. Morgan repeated its earlier statement on Sunday that it is looking into the video and declined to give any detail of the employee.
Mr Edmund Lee’s is the great-nephew of Lee Kuan Yew
While this bears little or zero significance to the matter at hand, it might be worth pointing out that Mr Edmund Lee, who sent out the aforementioned internal email memo, is related to Lee Kuan Yew.
Mr Edmund Lee is the eldest son of the late Freddy Lee, a prominent stockbroker, and nephew of the late Lee Kuan Yew.
Moreover, Mr Edmund Lee is listed in Singapore Tatler’s 300 List of “the most powerful and influential people in Singapore”.
The website also acknowledged him as “the former CEO of DBS Vickers Securities in Singapore” who has “led JP Morgan’s strategic development in Singapore and forged strong relationships with the local business community”.

J.P. Morgan’s Facebook spammed with negative remarks about employee
After the video of the incident became viral, J.P. Morgan‘s Facebook page was flooded with angry comments by Singaporean online users.

One particular Facebook post on 26 October was targeted by netizens as they penned their thoughts on the incident which not only highlights the crude personality and behaviour of Mr Ramesh – reflecting on the company’s image – but also transcends to the bigger picture of foreign talent influx in Singapore.
At the time of writing, the post has garnered more than 2,300 comments.
The comments were almost entirely hostile towards J.P. Morgan, condemning its integrity for the nature of its employees – in this case, exclusively on Mr Ramesh – while speaking up against the company’s policy of hiring foreign talents whereas Singaporeans would have been a much better fit.
Additionally, a handful of comments were ridiculing J.P. Morgan for not screening their employees properly prior to hiring them, hinting that Mr Ramesh actually provided false credentials in his professional profile.
The very implication even sparked an extensive conversation in a thread on Singapore Hardware Zone forum, which many of the comments actually cited.
Besides the many talks of racial and foreign conspiracies in the aforementioned forum as well as the petition to get Mr Ramesh fired, what’s even more interesting is the fact that netizens are claiming that J.P. Morgan had selectively concealed heaps of angry comments on its Facebook post.
As mentioned earlier, the post has chalked up more than 2,000 comments, yet close to 800 of those comments were allegedly either hidden or removed – or perhaps even reported as spam.