HDB says it incurs $2b deficit but didn't mention Govt makes $14.8b from land sales in last FY

Photo of HDB flats at Lorong 9 from Google Map

Housing Development Board (HDB) released its annual report yesterday (23 Oct) showing that its deficit climbed to $1.98 billion in the financial year ended on 31 Mar 2019. This figure was derived from a deficit of $2.4 billion incurred in its housing programmes but offset by a $462 million surplus from its rental and commercial businesses.
The $2.4 billion deficit was largely due to gross loss on the sale of flats, disbursement of CPF housing grants and the expected loss for flats that are currently under development, HDB said.
HDB also revealed that a total of 16,608 new flats were sold in FY2018/19, a 38 per cent decline from the 26,857 sold the previous year.
The main reason why HDB suffers a deficit every year is because it buys land from the government at market price but sells its flats “below market values”, especially with the “heavy discounts” given to first time buyers in the form of housing grants.
Last month, HDB announced that they would raise the household income cap for those looking to buy a BTO flat to $14,000. There will also be enhanced grants for first-time home buyers.
“Because of the social mission of HDB, it is recognised that a deficit of this nature will occur. It is a recurring thing, so that’s not surprising,” said Dr Choo, an adjunct Associate Professor at NUS.
Huge surplus from government’s public and private land sales
Despite the large deficit incurred by HDB due to its “social mission” of selling flats to public at “below market values”, with land bought from government at market price, what HDB didn’t say was that the government attains even bigger budget surplus from selling land to HDB as well as to private developers.
So, even as the government is financing HDB’s deficit of close to $2 billion a year, it made even more money from its land sales, selling them at market price.
Some time ago, netizens began to notice that the reporting of government budget balance was different from the one the government submitted to IMF. IMF data can be easily obtained from its website. Subsequently, the government was compelled to issue a statement explaining the difference as online discussions on the matter swell.
Government said that the overall budget balance presented to Parliament is based on revenues that the Government of the day can spend under constitutional principles. But it did acknowledge that the overall budget balance excludes proceeds derived from the sale of land as well as investment income from the reserves. The reason is that these are “not available for spending and are part of Past Reserves”, it said.
In the case of IMF data, Singapore subscribes to its format for the purpose of international data reporting, the government explained.
“The IMF presentation format includes all receipts, including land sales proceeds, and total investment income. However, some of these items are not available for spending by the Government under the Reserves Protection Framework in the Singapore Constitution as explained,” it emphasized again. “They are hence not included in the Government Budget, which portrays the fiscal resources available to the Government for the financial year.”
“Thus, while the IMF presentation format allows for data to be presented in a common international template, it does not cater to Singapore’s Constitutional provisions that seek to ensure the sustainability of government finances for future generations,” it added.
“While receipts that are not available for spending by the Government are not reflected in the Overall Budget Balance, the information can be found in the Revenue and Expenditure Estimates that is presented annually to Parliament.”
So, according to the Revenue and Expenditure Estimates in the latest government budget statement, it can be observed that proceeds from land sales rose from $14.8 billion in the last FY to an estimated $16.9 billion for the current FY (14.2% increase). 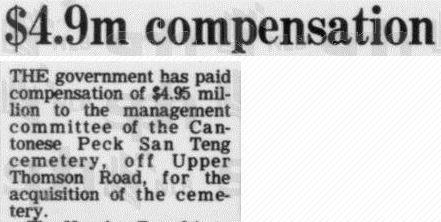 The government later built tens of thousands of HDB flats in Bishan selling each unit for about $50 to $150K each depending on flat type.