At the Viaduct collapse trial on yesterday (13 Sep), the court heard that soon after the collapse of a PIE viaduct in July 2017, professional engineer Dr Robert Arianto Tjandra texted a WhatsApp message to his then colleague, Liu Xiayu, that the incident had been a result of a “design mistake”.
Dr Arianto Tjandra was then working for subcontractor CPG Consultants and was the person in-charge of overseeing the design of the PIE viaduct. Liu, who joined CPG in 2010, was his subordinate at the time. Liu resigned in Feburary 2018 after the incident, which killed 1 worker and injured 10 others.
The main contractor for the project was Or Kim Peow Contractors (OKP), a public listed company run by members of a family who are grassroots leaders in People’s Association. It was Dr Arianto Tjandra who approved the design and supervised the construction works for the Changi PIE viaduct. He is currently facing five charges under the Building Control Act and the Workplace Safety and Health Act.
According to Straits Times, the court heard that about five hours after the incident, Liu messaged Dr Arianto Tjandra, saying that he felt “so sorry about the accident”. “Please let me know if I can help (with) something,” he added in the text message.
In response, Dr Arianto Tjandra asked Liu to re-check the calculations for the 2 affected vertical columns of the viaduct design. After making the calculations, Liu told Dr Arianto Tjandra that the columns had not been sufficiently designed to support the weight of the viaduct.
In response, Dr Arianto Tjandra asked Liu, “Then no deck slab can be cast?”
Liu replied, “Yes. Not allowed deck slab.” Deck slab refers to the slab of concrete that would have acted as the carriageway for vehicles on the viaduct.
“Die. My prop also failed,” Dr Arianto Tjandra continued, referring to the temporary structures to support the weight of the viaduct that was under construction.
At one point, Dr Arianto Tjandra told Liu, “Btw I am out of this job soon and my PE (professional engineer) licence will be also revoked.”
Liu then asked, “Oh no!!! How come? Any mistake they point to you?”
And Dr Arianto Tjandra replied, “This is obviously design mistake.”
Subsequent WhatsApp messages between Dr Arianto Tjandra and Liu also revealed that after the collapse, the Land Transport Authority had questioned CPG’s design. In one message, Dr Arianto Tjandra told Liu, “LTA boss already questioned our design for flyover 7 & 8. The design not consistent. Some piers heavily reinforced, some are not.”
Liu responded, “We try to explain. That’s why we use propping. Anyhow, I may not know the full story. But let me know if you need help at anytime. I am also responsible for it.”
When the lawyer representing OKP asked Liu if he had meant in the WhatsApp message that the PIE viaduct collapse was due to design inadequacies, Liu said, “Correct.”
CPG now a Chinese-run company
According to Wikipedia, CPG Corporation was the corporatised entity of the former Public Works Department (PWD) of Singapore. Under Temasek Holdings, the former government department was corporatised in 1999 and renamed as PWD Corporation, before being renamed as CPG Corporation in 2002.
In 2003, it was sold to the Australian Downer EDI Group.
In 2012, Downer Group sold CPG to China Architecture Design and Research Group (CAG), which is China’s largest diversified state-owned engineering design and services company, for A$147 million. At the time, the head of CAG told the media, “This is the first time for China’s high-tech services industry to go out and successfully complete an overseas acquisition.” Hence, since 2012, CPG Corporation has become a Chinese entity.
In any case, it has been revealed that Dr Arianto Tjandra is a talent hailed from Indonesia. 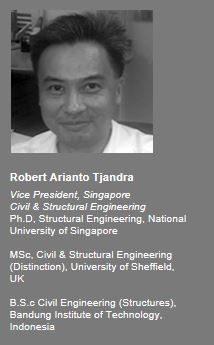 He got his first degree from Bandung Institute of Technology in Indonesia. He later went to University of Sheffield to do his MSc before landing in NUS to do his Ph.D in civil engineering.
It’s not known if Dr Arianto Tjandra himself did any of the original calculations for the viaduct design but without doubt, he was the person who approved the design with those flawed calculations.