CareShield Life Bill passed in Parliament; SGs born in 1980 or after must pay compulsory premiums

The CareShield Life Bill was passed in the PAP-dominated Parliament on Monday (2 Sep) after its second reading.
This means that Singaporeans who were born in 1980 or after will have to pay compulsory CareShield Life insurance fees starting next year. It is optional for those who were born in 1979 or earlier.
CareShield Life is meant for covering Singaporeans in case they are afflicted with “severe disability”. It is meant to gradually replace ElderShield, which presently remains optional for Singaporeans to join.
Come next year, those aged 30 to 40 must join CareShield Life and start paying premiums. Future cohorts will join at the age of 30.
Premiums start at $206 a year for men and $253 a year for women at the age of 30. They will make 38 payments till the age of 67. Should “severe disability” strikes, the policyholder will receive a payout of at least $600 a month, for as long as care is needed. 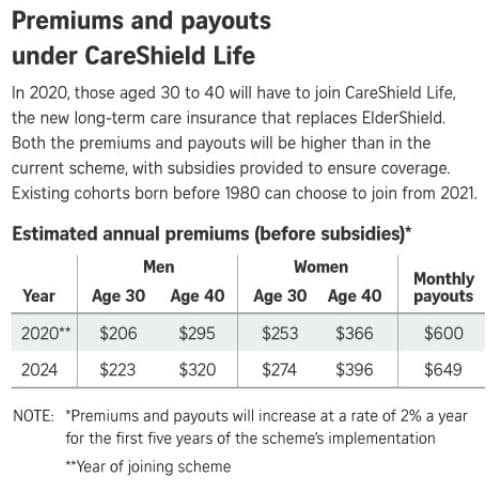 In contrast, the ElderShield scheme pays $400 a month for up to six years, but with lower premiums paid over a shorter period.
For those who want higher CareShield Life payouts, Health Minister Gan Kim Yong said they can go buy supplementary schemes from private insurance companies. That is to say, one has to pay more premiums.
Under the new law, anyone who falsely declares being severely disabled when they are not will be jailed up to 12 months or fined $5,000 or both. Those found guilty also have to pay twice the amount claimed.
The government will take “a strict stance” against people who can afford to pay their CareShield Life premiums but wilfully refuse to do so. This includes Singaporeans living overseas.
“Financing our long-term care needs is a shared responsibility,” said Gan. “We come together as a society to pool our risks through insurance, CareShield Life and ElderShield, to address the variability of long-term care costs.”
$600 monthly payouts not enough
When the CareShield Life scheme was first announced last year, people interviewed by the media already have their reservations. Many commented that the initial cash payout of $600 a month would barely cover their expenditure.
“It’s enough for now because I’m still working,” said graphic designer Benson Tiew, 38, who needs a wheelchair to get around after a traffic accident in 2002 left him paralysed from the waist down. “But it won’t be enough for my living expenses when I stop working and have to live on my own with a domestic helper.”
His 66-year-old mother is the main caregiver to him and his father who had a stroke 13 years ago. His three younger brothers have to chip in to help pay the family’s expenses.
Suresh Vanaz, 39, agrees that the payouts need to be higher. His brother has cerebral palsy and racks up $4,000 worth of hospitalisation, medication, transport and other living costs a month.
“Financially, it’s a good help, but it’s still a very small amount,” said Mr Suresh. He has been taking care of his brother for the past 12 years since their mother passed away and he has been working part-time so as to take care of his brother. Suresh thinks that the monthly payouts need to be at least $2,000 given his brother’s situation.
Dr Marissa Lee Medjeral-Mills, executive director of the Disabled People’s Association, also thinks that the payout needs to be higher than $600. A young person named Arwinder Singh, 28, said he wants the new scheme to be optional.
Hard to make claims under Eldershield
Meanwhile, it was also reported in the media last year that some $3.3 billion of premiums have been collected for ElderShield. But only $133 million (4%) has been paid out in claims so far, leaving about $3.2 billion with interests in the fund.
MOH in response to public discourse on the matter wrote, “Premiums collected under ElderShield currently exceed the claims paid out because the age profile of ElderShield policyholders is relatively young, with a median age of 52.
The premiums collected are not surpluses. They are meant to support future claims, when ElderShield policyholders become older and more of them become severely disabled and start to make claims.”
Workers’ Party Member of Parliament Sylvia Lim in Parliament during a debate on CareShield Life in July last year, raised the question as to whether CareShield Life would be using the same criteria for eligibility as the ones used for ElderShield.
The case of Mr K, one of Ms Lim’s former residents, who suffered from severe kidney failure and underwent amputation on one of his legs as a result of diabetes, was brought up by the MP during the Parliamentary debate.
Ms Lim made an appeal for a reassessment of Mr K’s eligibility on his behalf. However, he was served another claim form to fill up, and was admitted to a hospice.
The MP recalled in Parliament: “When I saw him there, he (asked) me to write to the insurer to say that he would not be filling up the form as he was in the hospice.
Eventually, his daughter filled up the form, and I understand that the hospice doctors assisted to get his ElderShield benefits restored.”
However, Mr K passed away “within a month,” said Ms Lim.
Prior to Ms Lim’s case, Mr Jose Raymond from the Singapore People’s Party, shared another case where a senior who was denied his payout by NTUC income despite being certified as being blind. The insurer had written to the blind senior, stating that he did not qualify for the benefits as he is still able to perform more than three ADLs.
Following Ms Lim’s mention in Parliament, MOH announced that family members and caregivers of severely disabled Singaporeans will go through a “simpler claims process which will be more convenient for policyholders.”
It is, however, to be seen if the overall insured under CareShield will see a simpler claim process and higher payout as compared to how the government has been running Eldershield.

Do you believe in political karma?