Prime Minister’s wife Ho Ching shared an article on her Facebook page today (21 August) titled “Why is the salary of Singapore’s Prime Minister so high?”
The accompanying caption to her post noted Singapore’s ‘clean wage system’.

She wrote, “One big difference is the clean wage system in SG – ie no other perks in kind, while most if not all other countries would have many other perks, like butlers and hairdressers, free flights on national airlines, even family holidays, etc; and quite a number like the USA would include perks after end of term of office.”
Now with a title like that, one would expect Ho Ching to have chosen to share an article that would best clarify her husband’s salary which has been debated on for years now. But we have to say, it was an entirely disappointing read.
The article on Seedly attempts to rationalise Prime Minister Lee Hsien Loong’s yearly 2.2 million salary by comparing it with the salaries of other leaders, factoring in GDP per capita and the population of each country.
The author starts off by providing listing the salaries of top government leaders in five other countries – Malaysia, Hong Kong, China, USA, and UK – next to that of PM Lee. Unsurprisingly, PM Lee tops the list with an annual salary of S$2.2 million. The next highest earner doesn’t even come close – that’s Hong Kong’s leader Carrie Lam with S$866,000 a year, followed by US President Donald Trump (S$541,000), UK Prime Minister Boris Johnson (S$264,000), Malaysian Prime Minister (S$89,000) and Chinese President Xi Jinping (S$29,000).

The article then clarifies while the Prime Minister earns more than double that of his Hong Kong counterpart, he still earns so much less when compared to some of Singapore’s top CEOs like DBS CEO Piyush Gupta who earned S$11.9 million in 2018 or the CEOs of CityDev and UOB who earned S$8.9 million respectively.
Paid high because of the GDP per captia increase over the years
Moving on to the supposed explanation, the authors decided to rationalise the pay structure of leaders by looking at the ‘scale of responsibly for each leaders’ which were gauged using GDP per capita and growth as well as population. They did this “in order to see how the respective country’s economy has progressed (GDP per capita growth) in relation to its population growth.
According to their table, the US and Singapore lead in terms of GDP per capita in 2017 at about S$80,662 and S$78,161 respectively. They are followed by Hong Kong, UK, Malaysia, and China, in that order.
This led the authors to conclude that Singapore has been ‘surging ahead many other countries’ since its independence. Presumably, this is a justification for the PM’s high salary.
The article said, “Since 1960, the GDP per capita of Singapore has grown the most across the countries we compared: 133 times to around $57,714 (USD) per capita in 2017, compared to 42 times (Malaysia), 107 times (Hong Kong), 98 times (China), 19 times (USA) and 28 times (UK)”
However, they failed to account for the fact that the leaders being paid in 2019 haven’t exactly been in power since the 1960s.
PM Lee took over reins in 2004, where GDP was recorded at S$37,114.25. His father, Lee Kuan Yew, who was the founding PM took over when GDP per captia was around S$690.
Furthermore, the litmus question to this justification comes if we are ever faced with a new Prime Minister who has nothing to do with the People’s Action Party over the past sixty years. Does his or her pay get reduced significantly as a result of the non-affiliation?
So claiming that they PM’s high salary is justified by the ever increasing GDP over the span of decades is wildly off-mark.
“Achievement” in increasing the population
The article further explains that Singapore’s population has also grown significantly, the second-fastest amongst the countries compared.
“Since 1960, the Population of Singapore has grown the second fastest across the various countries we compared: 3.4 times compared to 3.8 times (Malaysia), 2.4 times (Hong Kong), 1.9 times (China), 1.8 times (USA) and 1.25 times (UK). But in terms of actual figures, we are the smallest in population size at 5.6 Million.”
Again, the article attempts to explain that while Singapore is the smallest country by population, the high population growth rate justifies the PM’s multimillion-dollar salary. This population explosion was the reason for the GDP growth during PM Lee’s administration but they had to curb the influx, following the General Election 2011.
If this point was ever to be put to a referendum, TOC can bet that high population growth is the last thing that PM Lee is going to be approved of by the people of Singapore especially since it is the huge unplanned influx of population that lead to many issues that people face today, such as the overburdening of infrastructure and lack of jobs.
Best talents need to be attracted with great pay
The article then goes on to rationalise that Singapore needs the best talent to run the country and that the best talents are attracted with great pay, much like a private company would splurge when hiring its top management officials.
It said, “If we compare PM Lee Hsien Loong’s salary to other leaders around the world, it is clear that he is earning more. However, in comparison with other top CEOs of Fortune 500 companies, local banks, and STI companies, he’s only earning a fraction of their annual packages.”
“Singapore Inc, should continually hire the best talent and leaders, and reward them accordingly. Especially if the country is to continually outperform it’s peers in the global landscape.”
But, the same could be said with the leaders of other countries, isn’t it? That they could also increase their salary to match the Singapore leaders, given that their land mass, population, GDP and other factors are much higher than what Singapore has.
But they can’t, because it would be very hard to justify to the people in their country and also to the people running the civil service why the increase of salary is justified and how are they going to balance the coffers. Whereas in Singapore, media will simply regurgitate what the government says and an uncontested new policy like how Electronic Road Pricing was introduced, will help the Singapore government create billions of dollars of income over night.
Going back to the article’s earlier point about using GDP per captial increase over the years, no private company will use past performance as a gauge to reward the leader. If they screwed up in their job, they get removed and the next battle-player steps up. Under the current PM Lee administration, we can clearly see that we do not practice such form of natural elimination. Instead, past achievements are used to defray current mistakes. So to use the salary of the CEOs from the private sector as a justification to PM Lee’s high pay is quite inappropriate in many ways.

Not quite answering the question

The entirely article is perplexing. Instead of providing an answer to the question it raised of “Why Is The Salary Of Singapore’s Prime Minister So High?” they merely attempt a shoddy rationalisation that the PM’s salary is not too high, implying also that he might in fact be underpaid when you take into account the growth of GDP and population over the years.
Curiously, the authors also provided a disclaimer to say they have no political affiliations, saying that they only want to “put to rest the rumours and questions that are swirling around the internet through good ol’ fashion research and the use of facts and figures from official sources.”
Looks to me like they really missed the mark there since their research did not so much explain why the PM’s salary is so high but rather was round-about rationalisation of what he’s being paid now.
It’s entirely baffling why Ho Ching would think to share such an article in the first place.
Clean wage
Now Ho Ching wrote in her post that one big difference is the clean wage system in Singapore – ie no other perks in kind during office, and no pensions or other benefits after leaving office in Singapore.

“In most, if not all, other countries, they would have many other perks during term of office, like butlers and hairdressers, free flights on national airlines, even family holidays, etc; and quite a number like the USA would include perks after end of term of office.”
You can’t help it but feel puzzled when Mdm Ho makes such statements because we all know how the ministers are being offered positions in GLCs after they step down from politics. One example is Lim Boon Heng, who left politics in 2011 and joined Temasek Holding in 2012 as a director and became the chairman after just a year. Wong Kan Seng, former Home Affairs Minister who saw the escaping of Mat Selemat, was appointed as the chairman of Singbridge, a unit of Temasek Holdings, in 2011 when he stepped down from cabinet and later appointed chairman of Ascendas-Singbridge after the merger of the four operating subsidiaries owned by Temasek Holdings and Jurong Town Corporation in 2015 when he left politics. These are just a few examples.
On free flights, you have observations made by people such as Kenneth Jeyaratham who questions the use of a Gulfstream business jet owned by Pacific Flight Services by PM Lee and Ho Ching to attend various events in the region. Pacific Flight Services is a subsidiary of ST Aerospace which in turn is part of the ST Engineering Group, 50% owned by Temasek Holdings. 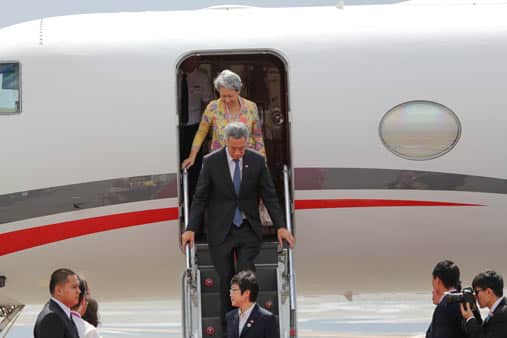 We’ll also note that there have been just as many questions swirling in the public sphere over what the Prime Minister’s wife herself makes as the CEO of Temasek Holdings. For years, Temasek has chosen not to share the wage structures of their top management including its CEO.
As Temasek is an exempt private company under the Singapore Companies Act, it is not required to publish its audited statutory consolidated financial statements. Meaning all estimates of Ho Ching’s annual salary are guesses which range from S24 million to over S$100 million a year.
Perhaps there’s another article out there that Seedly can ‘put to rest the rumours and questions that are swirling” about the salary of Temasek’s CEO.