It was earlier reported that a 60-year-old Singaporean elderly man, Lim Koh Leong, was not allowed by the CPF Board to fund his daughter’s education despite having more than enough money in his account.
He revealed that he currently has more than $70,000 in his CPF account and he only needs $15,000 for his daughter’s school fees. Unfortunately, his request was denied by CPF Board as he could not meet the CPF minimum sum for “basic retirement” (‘Public lambaste CPF Board for disallowing elderly man to use his CPF fund for daughter’s education‘).
However, foreign students like Xu Ke, a mainland Chinese, did not have such issues. In fact, his studies in Singapore was entirely financed by the Singapore government free-of-charge. Furthermore, he need not serve any bond nor need to pay back any money to Singapore for his studies here.
Xu even made it to the world financial news earlier this year. It was earlier reported by Bloomberg that Xu was sent to jail for allegedly stealing confidential codes from his company. He was then working as a hedge fund analyst in G-Research in UK. After spending four-and-a-half years in a British jail, he was deported back to China in Jan this year.
Xu turns into an intellectual property thief
Xu was in fact, convicted in 2015 of downloading algorithms from London-based hedge fund company G-Research. He was arrested and served three sentences in Britain after G-Research reported him to the Police. His trouble began in 2014 when he covertly downloaded the company’s closely guarded software powering the hedge fund’s trading.
After quitting and fleeing to Hong Kong, he was arrested, extradited to the U.K. and convicted of fraud. G-Research and its lawyers then began a private prosecution in an attempt to force him to reveal what he’d done with the code. He was jailed again in 2017 for failing to comply, and once more in June 2018 for contempt of court.
Before he was denounced as a thief and cast out of the hedge fund industry, he was identified as a math prodigy. He grew up in Hubei province and loved puzzles. When Xu was 16, his school identified him as a gifted student and recommended him for a MOE scholarship at the Raffles Institution in Singapore.
Bloomberg described Raffles Institution, where many of the Singapore ministers had received their education from, a “prestigious British-style boarding school” with the Latin motto “Auspicium melioris aevi (Hope of a better age)”. Xu was said to have “mastered English” and “cruised through his classes” in Raffles.
After studying in Raffles, he left Singapore and moved to the U.K. to study mathematics at Cambridge, eventually graduating third in a class of 250 in 2008. It’s not known who paid for his education in Cambridge but in any case, he didn’t bother to return to Singapore.
After graduation, he joined the prestigious Goldman Sachs in London. As he found the work was getting boring, in 2012, he joined G-Research, a London-based boutique hedge fund, where complex trading strategies are being developed mathematically to beat the market. Bloomberg reported him being unhappy with the payout that he was getting, as it was lesser than what he had expected.

Two years later, he decided to quit suddenly and left for Hong Kong, not before he surreptitiously copied some sensitive software from the company.
Xu an ‘SM1’ scholar sponsored by MOE
A Chinese news article revealed that Xu came to Raffles Institution to study through the MOE’s Senior Middle School Scholarship (SM1) exam.
According to Baidu, the SM1 programme was established by the Singapore government in 1991 with the objective of sponsoring mainland Chinese students to study here. Each year, MOE would recruit around 300 Chinese students to Singapore. In the case of SM1, students from a number of China’s senior middle schools would be recruited to study in here from Sec 3 to JC 2.
SM1 uses a system which pairs middle schools in the various Chinese provinces to the respective secondary schools in Singapore. For example, in the case of Xu who was hailed from Hubei province, his school together with 6 others in Wuhan city were paired with Raffles Institution and Raffles Girl’s School: 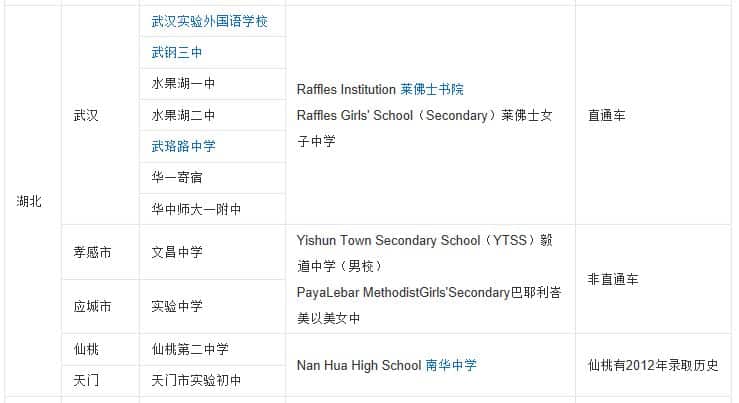 That is to say, students from the above 7 middle schools in Wuhan can apply for MOE’s SM1 scholarship to study in RI or RGS. More than 200 middle schools in China and a number of secondary schools in Singapore are involved. The selection process is through a common ‘SM1′ examination as well as interviews. Interviews are conducted by the schools’ own teachers and principal.
Baidu reported that the living expenses of SM1 students are set at S$2,200 per year for the first two years and S$2,400 per year for the next two years. The tuition, accommodation and food expenses are borne by MOE and are not included in these living expenses.
In any case, Xu has gone back to China. It’s not known how sponsoring Xu to study here would have helped Singapore except that he must have deprived a place for a Singaporean child to study in Raffles Institution.
Meanwhile, Mr Lim Koh Leong has written on his Facebook page that some of his family members will help to fund his daughter’s $15,000 school fees. He need not bother the CPF Board anymore.