Starting yesterday (1 Jul), the electricity tariff for households in the current quarter increased by 6.4% to 24.22 cents per kWh. This makes it the highest electricity tariffs in last 5 years since the fourth quarter of 2014, where it stood at 25.28 cents per kWh (‘Electricity tariff to rise 6.4% in July-September to highest in nearly 5 years‘).
In a statement released by the Singapore Power (SP) group on Saturday (29 Jun), it said that the increase in electricity tariffs was mainly due to “higher cost of natural gas” for electricity generation. For the average family living in a 4-room HDB flat, this translates to an increase in their electricity bill by approximately 6.3%, from $82.82 to $88.02, SP said.
On the same day, City Gas also announced that it will raise gas prices for households by 1.6% starting from this quarter. City Gas said that this increase is due to higher fuel costs compared with the previous quarter (‘City Gas prices to rise 1.6% from July to September‘).
Last year, even before any of such increase, the media reported that ordinary Singaporeans were already feeling the pinch of the large utility bills they have to pay each month (‘Hit by rising water and electricity bills, Singaporeans and businesses tighten belts‘).
Even those living in condominiums at posh districts were not spared. Housewife Chuang Pek Yah, 62, who lives in a condo in Bukit Timah, resorted to dimming the ceiling lamp to save electricity. She was even considering doing laundry every other day instead of daily. Similarly, 46-year-old taxi driver Kent Chia was “extra mindful” of electricity and water usage and his family tried hard to “save where [they] can”.
SP makes net profit averaged close to $1 billion a year in past 14 years from Singaporeans 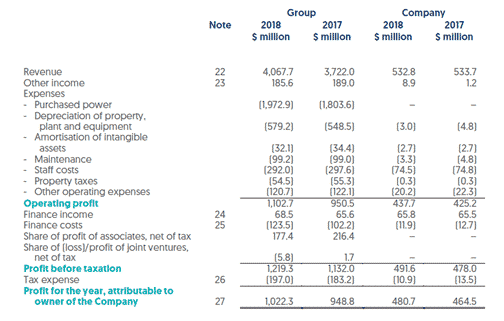 And thanks to bloggers like Philip Ang who have been keeping track of the financials from the various government entities, it has been revealed that SP Group, which is fully-owned by Temasek Holdings, is making an average net profit of close to $1 billion a year from 2005 to 2017: 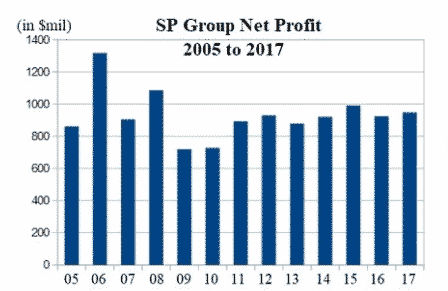 Including last year’s net profit of more than $1 billion, SP group would have made net profit of close to $1 billion for the last 14 years out from Singaporeans like condo dweller Mdm Chuang or taxi driver Kent Chia.
So, while Temasek appears to be losing money in its overseas investments like its investment into German pharmaceutical company Bayer, it certainly is making good money from local investments like its 100% owned SP Group.