Many countries in Asia are known to have exceptionally strong healthcare systems. Our study aims to examine which one of these countries are leading the way in terms of healthcare quality, accessibility and affordability.

Increasing healthcare costs, health coverage gaps and low-quality healthcare can threaten not just the overall productivity of society, but also the general well-being of individuals. However, as countries develop and economies grow stronger, governments are spending more money to increase healthcare quality and affordability for their citizens.

With this in mind, we studied the healthcare industry in 13 top economies in APAC to see which country is leading the way in providing high quality and affordable healthcare for its citizens.

According to our analysis, Japan’s healthcare system ranked first, due to its exceptional healthcare outcomes, accessibility and affordability. Citizens enjoy long lives and have access to healthcare that provides quality treatment for common health conditions, suggesting quality healthcare is a priority.

Not only does Japan score the 2nd highest out of our countries on the Institute for Health Metrics and Evaluation’s Healthcare Access and Quality Index (94.1) but its citizens live 13.6 years longer than the global average, suggesting that medical care is accessible and of high quality even in old age.

Australia ranked second in our study due to its robust government expenditure on healthcare, good citizen health and high concentration of doctors and nurses per capita. It scored exceptionally well on the Health Access and Quality (HAQ) index, suggesting that individuals have access to necessary treatment for life-threatening illnesses such as cancer, diabetes and respiratory infections. In fact, Australia’s cancer mortality-to-incidence ratio is one of the lowest compared to other developed countries.

However, despite Australia’s rank for government health spending, its citizens pay higher out-of-pocket expenses than 7 other countries on this list. This may stem from Australia’s high rate of private healthcare coverage.

New Zealand comes in third due to high accessibility and affordability scores. Its national healthcare system is publicly financed, subsidies are available to financially challenged groups, and children under 13 can enjoy free primary care.

Likely due to these measures, New Zealanders pay 23% less in out-of-pocket costs compared to the other 3 countries on our list. Furthermore, as of 2016, New Zealand also had the 2nd highest physician per capita rate (30.25 per 10,000 residents) and the 3rd highest nurse and midwife rate (11.1 per 1,000 residents), suggesting citizens have ample access to medical personnel.

However, while New Zealand provides appropriate amounts of funding and accessibility, we found it has a lower DPT immunisation rate (92% of children up to 2 years old) compared to other countries in our top 5. This may be partially explained by the lower overall immunisation record of certain demographics. For instance, Maori children immunisations declined from 93% in 2015-2016 to 88% in 2018.

Singapore is known for having exceptional medical care and an enviable health insurance system. To further prove this point, we found that Singaporeans enjoy high-quality healthcare, live long lives with low maternal and infant mortality rates and are automatically covered by government health insurance.

For instance, Singaporeans lead long lives, beating the global life expectancy average by over 12 years. The country also has some of the lowest infant mortality (2.2/1,000 births) and maternal mortality (10/1,000) rates worldwide.

Singapore has the 5th highest rate of physicians and nurses per capita, suggesting that health services are abundant.

However, while Singaporeans are automatically enrolled in their public health insurance scheme, MediShield Life, citizens still face a higher cost burden compared to other countries on our list.

In fact, the private spending proportion of 46% is almost 10% greater compared to the average private spending on healthcare compared to other countries on our list. This coincides with Singaporeans paying the greatest amount in dollars for out-of-pocket expenditure ($1,273 in current dollars, PPP).

These out-of-pocket expenditures may come not only in the form of mandatory CPF contributions like Medisave but also through decisions to get private hospitals or non-subsidised ward treatment.

However, due to Singapore’s high gross national income (GNI) per capita, our estimates show that Singapore’s out-of-pocket cost burden relatively low compared to other countries on this list.

Furthermore, medical services are abundant, with South Korea having one of the highest physician (23.66/10,000) and hospital bed rates (11.5/1,000) per capita out of the countries studied. It also has one of the highest DPT immunisation rates, indicating widespread access to routine childhood vaccinations.

South Korea also offers universal healthcare that is financed by the insured and the government. However, despite the government dedicating around 13% of its budget to healthcare expenses, the private cost burden is still relatively high at 41% and out-of-pocket spending is 3rd highest out of the countries studied.

This high out-of-pocket spending may stem from high co-pays and the fact that chronic illnesses such as cancer are not covered by South Korea’s government healthcare system.

How Does Healthcare Compare in the Rest of Asia-Pacific

The purpose of this study is to find and highlight the best healthcare systems rather than identify which countries are the worst. Therefore, it would be incorrect to view countries ranked 6-13 in our study as the worst in terms of healthcare in the region, especially since we didn’t analyse every country in Asia-Pacific.

However, there are a few points for discussion regarding the rest of the countries we studied. First, we found that affordability was a contributing factor to lower rankings, with private healthcare spending making up a larger proportion of overall expenditure compared to government spending. Furthermore, these countries also ranked below average for accessibility and healthcare outcomes.

This is exemplified by the large disparity in the HAQ scores within the countries themselves. For instance, while Beijing had a HAQ score of 91.5, Tibet (which was counted as part of China) had a score of 48. 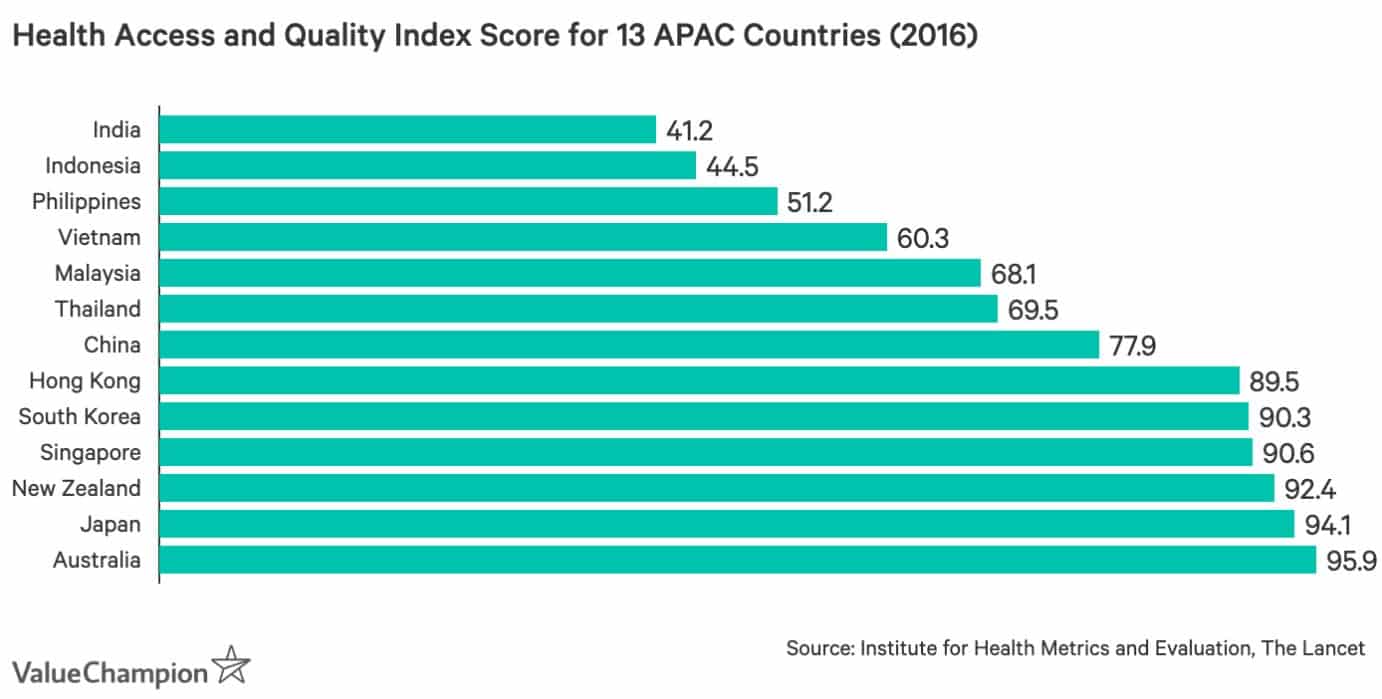 Despite below-average rankings, most of these countries have seen great improvements in healthcare within the past 10 years. For instance, India, China and Indonesia saw a 32%, 26% and 24% increase in their HAQ index score between 2005 and 2016, suggesting improvements in illness survival rates.

Thailand, China and South Korea see nearly 100% rates of DPT immunisations, suggesting that routine and lifesaving infant care is readily available to the majority of the population. In fact, Thailand has been a top medical tourist destination for years due to its affordability and advanced medical care. 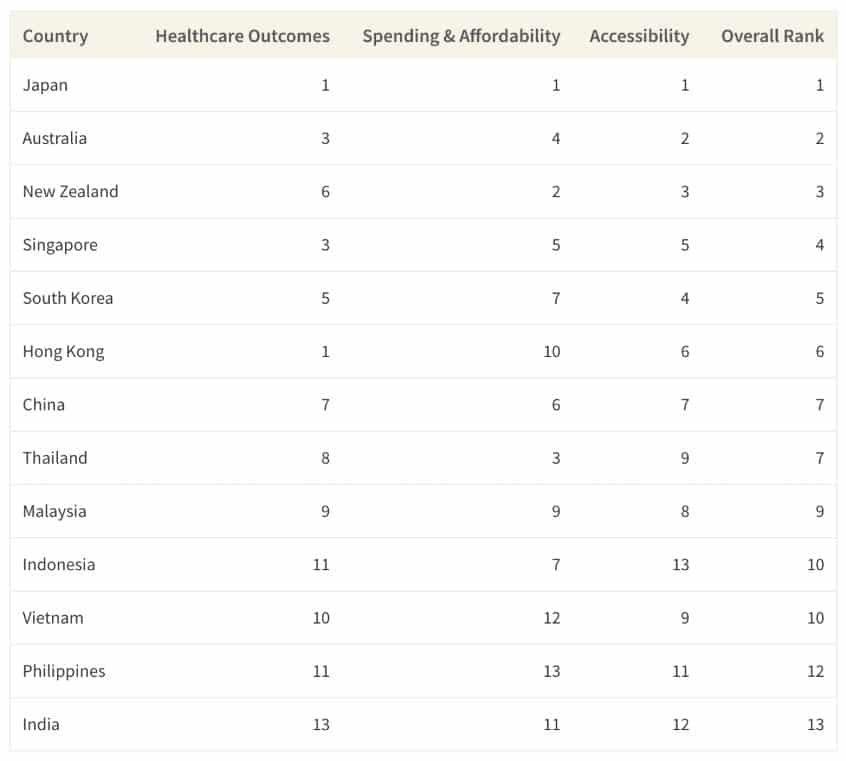 These figures helped us determine whether people are leading generally healthy lives and have access to quality healthcare in the event of a serious illness. 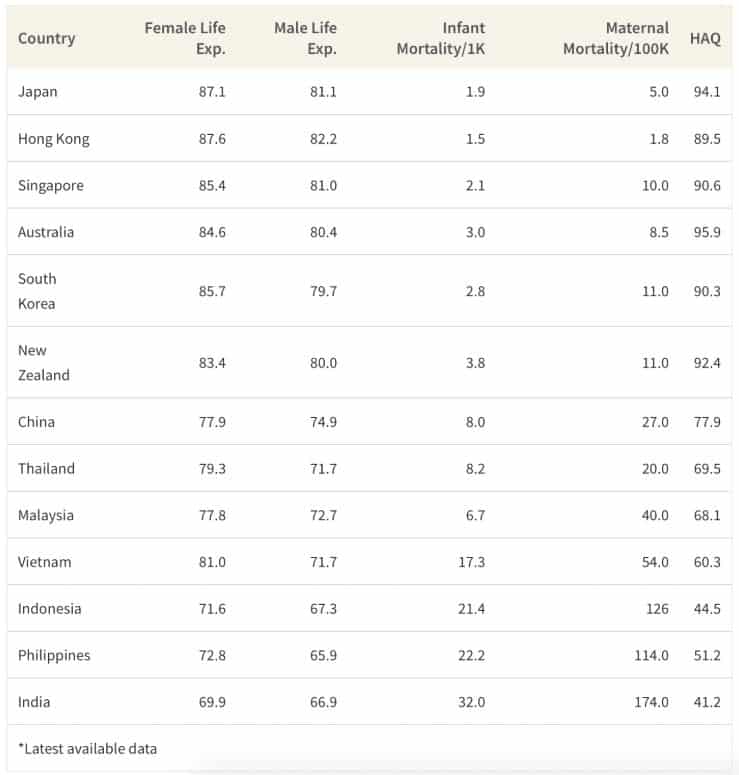 This metric reflects the cost burden placed on the citizens—whether it’s out-of-pocket spending or private funding spending (such as private insurance costs). Next, we looked at how much the government spends on healthcare as a percentage of its total spending.

This is seen in the column labelled “Gov’t Spending (% of Budget)” and shows what level the government prioritises healthcare as part of its budget. 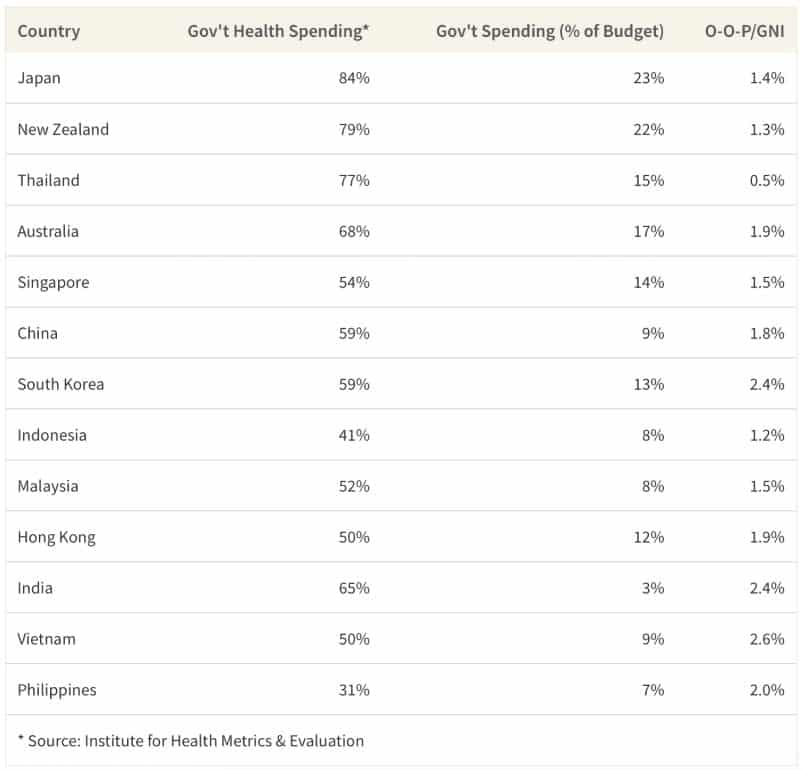 Our affordability category was measured by calculating out-of-pocket spending compared to the Gross National Income (GNI) (both indicators using Purchasing Power Parity). This showed us how much income is spent on out-of-pocket healthcare and whether or not it is a significant cost of a household’s expenditure.

We chose to use GNI, rather than Gross Domestic Product (GDP), because GNI takes into account income generated by citizens who are working abroad. Since some of the countries we measured have populations who work abroad to send money back to their families, we thought this would prove to be a more accurate measure of affordability.

We used the UHC index score as it includes a number of factors such as immunisation rates to show us how accessible healthcare is in a particular nation. 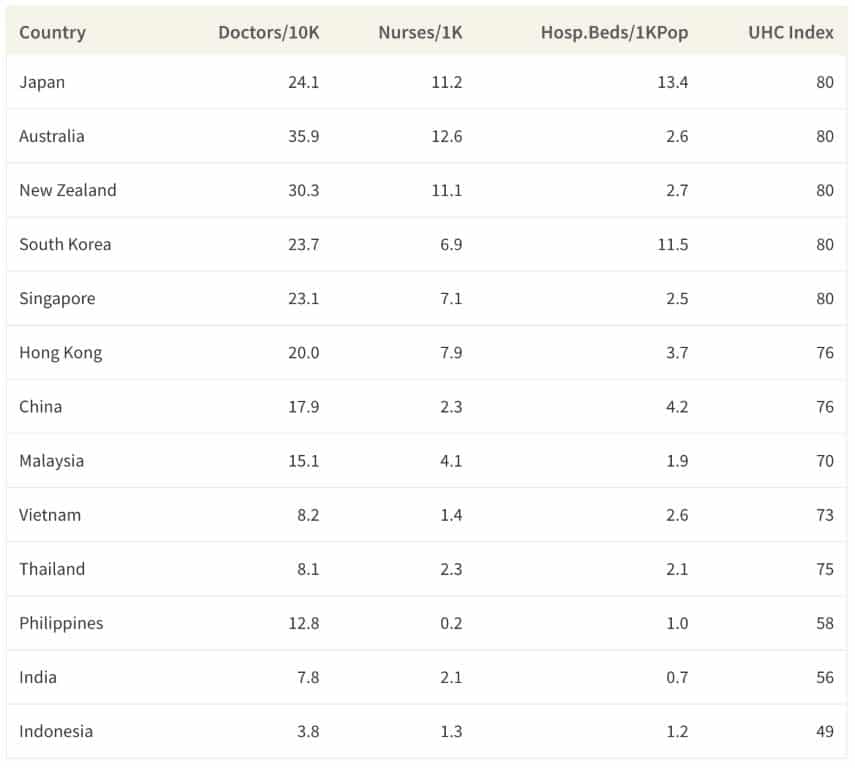 In order to analyse the healthcare systems of each country, we used publicly available government data as well as World Bank (WB), World Health Organisation (WHO) and other institutional databases.

We used the latest available data whenever possible either from the aforementioned databases or directly from government sites. In cases where we had to calculate a new figure, data was compiled in the same years. For instance, when calculating the out-of-pocket expenditure as a percentage of GNI, we used 2016 figures as this was the year that was available for both metrics.

There were a number of limitations that we encountered. First, the lack of availability of data meant we were limited to using high-level indicators that had available data for every country. For example, of this is consultation time, which had a significant lack of data across countries despite it being an important indicator for the quality of healthcare.

Additionally, the percentage of the population that dropped below the poverty level due to high out-of-pocket healthcare costs. This could have been interesting to see because it would paint a picture of how crippling out-of-pocket costs are—especially because, for some countries, out-of-pocket costs were partially voluntary.

Furthermore, because Hong Kong is considered to be part of China for the UHC score, we had to use China’s score for both countries. Lastly, Taiwan couldn’t be included in our study due to the lack of data for a significant portion of our metrics.

This was first published at Value Champion’s website, “Top 5 Healthcare Systems in Asia-Pacific“.