It was reported in the media yesterday (23 May) that a local aesthetics and beauty supplement company Esthemedica confirmed that it did hire Australian pedophile Boris Kunsevitsky as a regional business development director. This is a position based in Singapore.

Kunsevitsky was arrested in Australia and pleaded guilty in a Melbourne court this week to sexually abusing dozens of children over a period of 16 years. He even produced child pornography material where he induced a child to have sex with another child.

The court documents showed the offences involved 44 child victims, including five in Singapore. The court heard that he traveled across Southeast Asia on supposed work trips, but these were used instead for “sex tourism”.

Esthemedica’s marketing manager Hoong Cheong Hon told the media that he did not know of Kunsevitsky’s “appalling” acts until news of his Australian court case emerged this week. Hoong confirmed that Kunsevitsky joined the company in 2014 but left for Australia in July 2017 in a “quite abrupt” fashion. But the company continued to employ him.

Even as recent as last Friday (17 May), Hoong shared that they were “talking normally” over some business matters over the phone. Hoong confirmed that the Australian did go overseas for road shows and had “traveled quite a bit” within the Asian region during this time.

According to Kunsevitsky’s LinkedIn information, he is the International Business and Clinical Development Director at Esthemedica Pte Ltd: 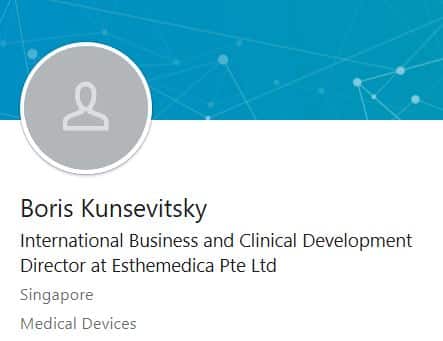