A government voter registration campaign from the French government has been rejected by Twitter due to the country’s anti-fake-news law.

Since December, France instated a new law in which online political campaigns are required to provide “fair, clear and transparent” information about the person or company, and the amount paid, in an open and accessible database format in order to combat anonymous political messages.

As Twitter could not find a solution to obey the letter of the new law and opted to avoid the potential problem altogether, officials said.

News agency AFP reported that the #OuiJeVote (Yes, I Vote) campaign was operated by the French government information service, which had planned to pay for sponsored tweets to encourage early registration for the European elections.

Twitter’s refusal to take money from the state to promote the message left many people in France bewildered, including MP Naïma Moutchou who tweeted that she thought it was an April Fool’s prank. 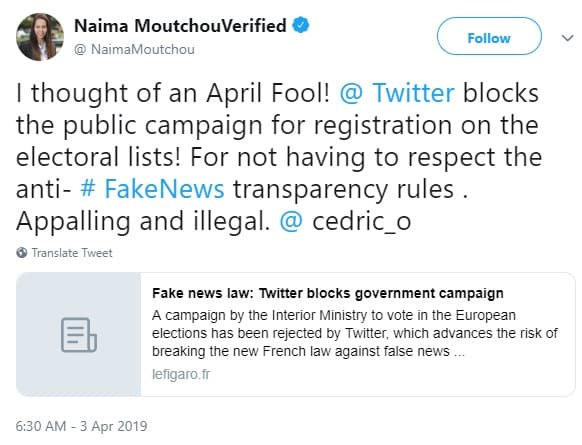 Interior Minister Christophe Castaner vented his frustrations with Twitter’s decision on the platform: “Twitter’s priority should be to fight content that glorifies terrorism. Not campaigns to register on the electoral lists of a democratic republic.” 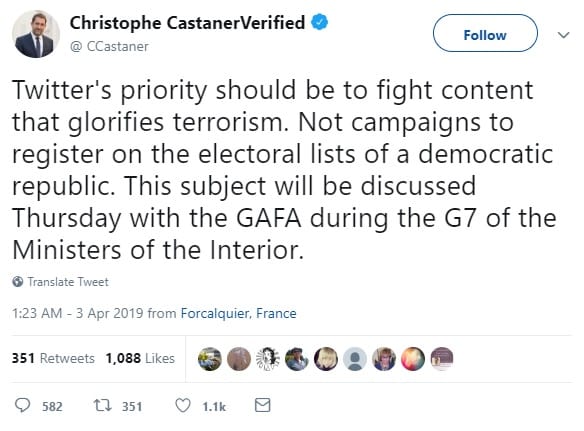 The government information service told AFP news agency: “Twitter does not know how to do that today, and so decided to have a completely hard-line policy, which is to cut any so-called political campaign.”

But it argued that the simple intent of the public information message in getting people to register to vote should not count as a “political campaign”.

“It’s not that the law has backfired against us, it’s a platform which does not comply. In our opinion, this is (the) last stand on their part to put the discussion back on the table, with the aim of adjusting the measures,” it said.